Sir Ed said there was a “real chance” of getting the Prime Minister out of office in the next election. 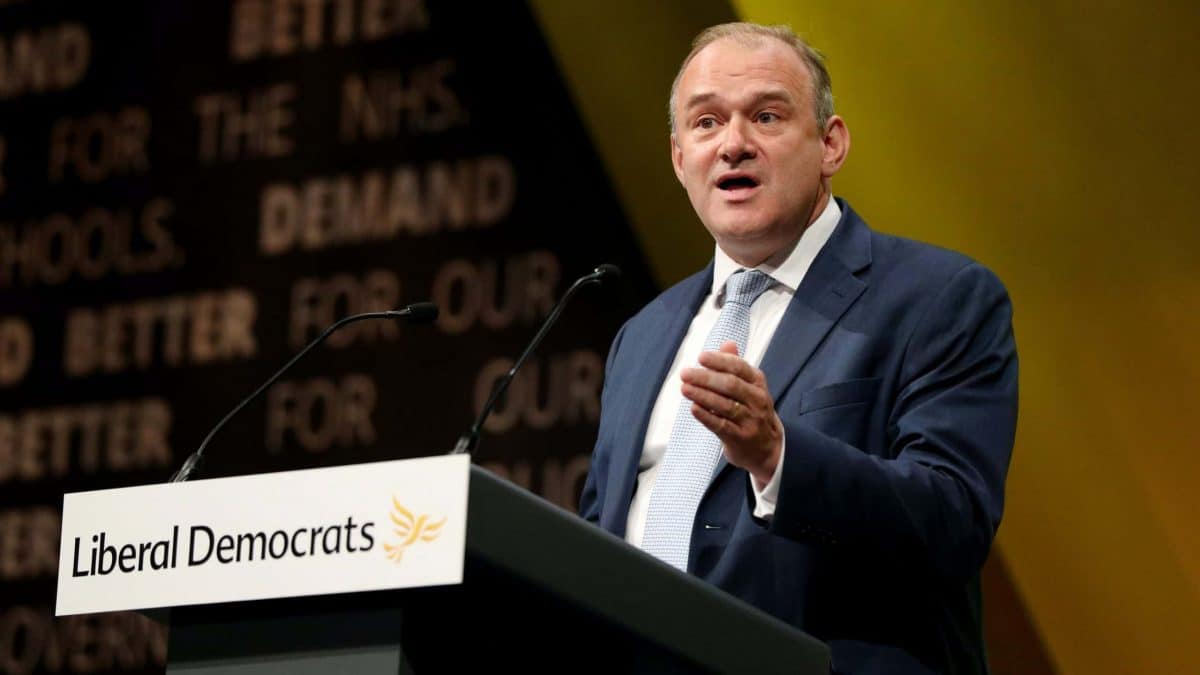 Sir Ed said there was a “real chance” of getting the Prime Minister out of office in the next election.

And he told Trevor Phillips On Sunday on Sky News: “We’ve proven that the Conservatives can be beaten anywhere, and I think we’ve confirmed the reality that if we’re going to get Johnson and the Tories out of office, it’s going to take the Liberal Democrats beating Conservative MPs in their blue wall seats.”

The Liberal Democrats overturned a massive Conservative majority to take the North Shropshire seat by almost 6,000 votes on Thursday.

The by-election came after Owen Paterson resigned in disgrace after being found to have breached lobbying rules, following an abortive attempt by the Tories to prevent him serving a 30-day suspension.

The result sent shock waves through Westminster after weeks of damaging headlines about Tory “sleaze” and reports of partying in No 10 in breach of Covid restrictions last year.

Mr Johnson said he took “personal responsibility” for what he described as a “very disappointing” result” for the party.

But Sir Ed accused the Conservatives of “letting people down”.

He said: “They have taken people for granted, that is why the Liberal Democrats won in North Shropshire, why indeed we won in Chesham and Amersham, and why I’m so excited about the prospects ahead of us.

“I think there’s a real chance of getting Boris Johnson and the Conservatives out of power in the next election and I think the Liberal Democrats have shown the way.”

It comes as the Lib Dem released polling claiming one in four people (24%) said they were more likely to support the party following the by-election success.

In the data, commissioned by the Lib Dems and seen exclusively by the PA news agency, it was claimed one in three Labour voters (29%) were now more likely to back the Lib Dems following the North Shropshire win.

‘The route to getting rid of Tory MPs‘

In many traditionally Tory seats, the Lib Dems claimed Labour were in a distant third place and Conservative MPs were defending narrow majorities.

But Labour’s shadow health secretary Wes Streeting said on Sunday that he did not see the North Shropshire result as a disappointment, despite his party getting just 9.68% of the vote in Thursday’s poll.

Mr Streeting told Sky’s Trevor Phillips On Sunday: “I think what North Shropshire shows us is that political parties are perfectly capable of making informed judgments about where to spend their resources and voters can be trusted to make the decisions that give them the outcome that they want – in this case removing a Conservative MP – and I’m not the slightest bit disappointed by the result in North Shropshire.”

He added: “Looking at the lie of the electoral map, there will be some parts of the country where getting rid of a Conservative MP, the best route, the easiest route to that is to vote Liberal Democrat.

“There are far more places in the country where the route to getting rid of a Conservative MP and delivering a Labour government is by voting Labour, and voters can make their own decisions.”

Appearing on the BBC’s Andrew Marr Show, Health Secretary Sajid Javid said the by-election loss was the fault of the “the Conservative Party collectively”.

He said: “I think we got a number of things wrong. How we handled the Owen Paterson affair was wrong and I’ve said that before. I regret my role in that, but that was wrong and I think that was hugely damaging of course because he was their MP.”

“And a lot of his constituents wouldn’t have liked what has happened,” he said.

“And I think some of the recent news around whether there were gatherings in Number 10 or not gatherings, whatever… or even Christmas parties. So what has or has not happened, the fact that it’s been investigated that hasn’t helped.

“So it’s a disappointing result. Let’s not sugarcoat it and pretend that there’s some good lining in it.”