Do you reckon he noticed the irony? 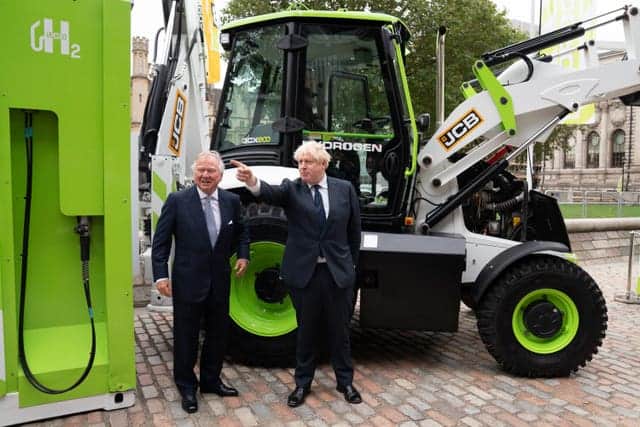 The company made the announcement as it unveiled a prototype hydrogen-powered backhoe loader and another machine – a telescopic handler – with prime minister Boris Johnson at an event in London.

But what didn’t slip many people’s attention is that the owner, Lord Bamford, snapped with the PM, is a major party donor who also lends his private jet to the PM!

It comes as Boris Johnson compared himself to Moses in his pursuit of a green future.

He said he brought his ten-point climate change plan “down from Sinai”.

Instead of ‘thou shalt not kill’ and ‘thou shalt not steal’, the PM’s green ten commandments – his self-described ‘dekalog’ – includes ‘driving the growth of low carbon hydrogen’ and ‘investing in carbon capture, usage and storage.’

People who remember the private flight he took from London to Cornwall, to attend the G7 Summit, might think this is a stretch at best.

JCB tycoon Lord Bamford’s family has given some £14 million in cash and gifts to the Conservative Party since 2001.

Among the gifts have been dozens of flights on Lord Bamford’s helicopters and a Gulfstream private jet – worth hundreds of thousands of pounds and pumping huge amounts of carbon into the atmosphere, reports The Mirror.

“It was fantastic to see JCB’s super-efficient hydrogen engines, which could overhaul UK manufacturing, help us to rapidly reach our climate targets and ramp up the UK’s hydrogen economy – an exciting area that will be essential to tackling climate change, creating new jobs and attracting investment.”

Related: WATCH: Johnson would just ‘joke around’ when discussing civilian casualties in Yemen