Dan Tehan and Anne-Marie Trevelyan were unable to thrash out a post-Brexit trade deal, with several issues unresolved. 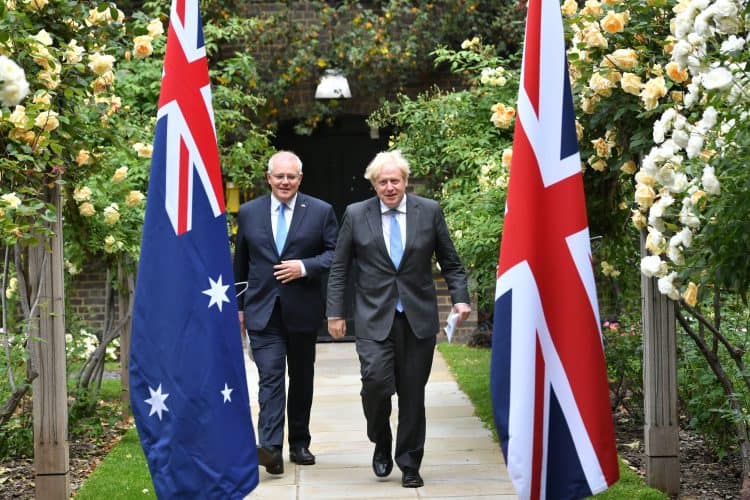 The Australian trade minister has flown home without clinching a trade deal with Britain.

Dan Tehan had travelled to London in hope of signing an agreement with his opposite number, Anne-Marie Trevelyan, but the two sides have kicked the plan into the long grass.

“I know we’re all impatient to get that signature on the final inked deal,” Tehan told the U.K.-Australia Chamber of Commerce on Friday, the morning after his meeting with Trevelyan.

“I can tell you no one is more impatient than me to get that done. But we do have to make sure that we get it right.”

The two sides reached an “agreement in principle” in June, but have been held up by negotiations over the legal text.

There are 32 chapters in the agreement. By the end of Tehan’s trip, 29 of those chapters had their legal text finalised, Politico reported.

London and Canberra had hoped to finalise the deal during Tehan’s trip, with George Brandis – the Australian high commissioner to the UK – telling Tory party conference that an agreement was near.

“We hope that the last outstanding issues will be nailed down then when [Tehan] has the first face-to-face meeting with the new trade secretary,” he told a fringe event at the conference in Manchester.

It emerged last month that UK ministers bowed to pressure to drop binding commitments to the Paris climate change agreement from its post-Brexit trade agreement with Australia.

Liz Truss, the trade secretary, and Kwasi Kwarteng, the business secretary, ruled the government could “drop both of the climate asks” from the text of the controversial trade deal, according to emails from a senior official seen by Sky News.

Among the chunks removed from the text was “a reference to Paris Agreement temperature goals”, the broadcaster reported.

References to Paris will remain, but they will be “implicit” rather than spelt out in the text of the trade treaty, it was revealed.

It is in stark contrast with the UK’s trade deal with the European Union, where temperature commitments are explicitly in the deal.

However, Sky News reported, Boris Johnson’s administration will claim a climate “win” by referencing the Paris Agreement in the text of the treaty – the first time that has happened in an Australian trade deal.

The leaked email was sent last month, and reveals details about internal government discussion over the trade deal. It comes from a senior official in the “trade secretariat” of the Cabinet Office.

He writes: “As flagged in my note to Lord Frost, the Business and Trade Secretaries were due to speak yesterday. We haven’t yet seen the formal read out, but we understand the conversation took place and the Business Secretary has agreed that, in order to get the Australia FTA over the line, DIT can drop both of the climate asks (ie on precedence of Multilateral Environmental Agreements over FTA provisions and a reference to Paris Agreement temperature goals.)”

The Paris Agreement forces countries to set goals to limit global warming to well below 2C – and is references in other trade agreements signed by the UK.

Australia is a signatory to the Paris Agreement, but the country’s prime minister Scott Morrison has submitted less ambitious targets than other major nations.