"Well given that Moses never actually reached the promised land that doesn’t exactly fill me with confidence…"wrote one Twitter user. 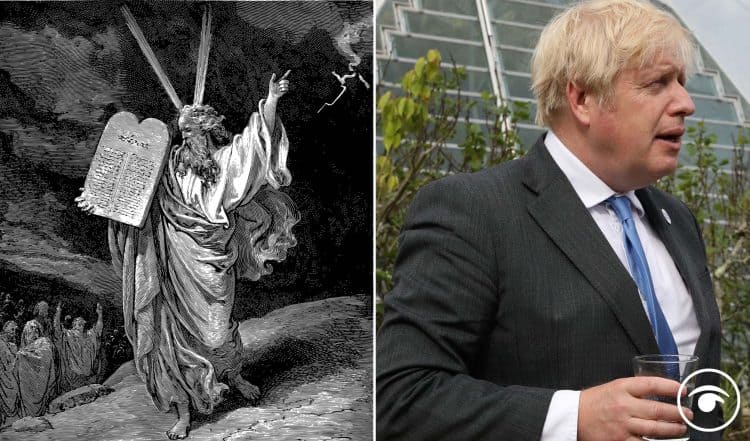 Boris Johnson has compared himself to the biblical figure Moses in his latest bizarre utterance, saying he brought his ten-point climate change plan “down from Sinai”.

Instead of ‘thou shalt not kill’ and ‘thou shalt not steal’, the PM’s green ten commandments – his self-described ‘dekalog’ – includes ‘driving the growth of low carbon hydrogen’ and ‘investing in carbon capture, usage and storage.’

It comes as the Government rolled out the red carpet for business chiefs including Bill Gates, with lavish receptions at Downing Street and a gathering hosted by the Queen at Windsor Castle.

Downing Street said plans being announced at the summit would see £9.7 billion of new overseas investment in the UK, creating 30,000 additional jobs.

Boris Johnson said the “green industrial revolution”, the freedom to deviate from EU regulations after Brexit and the “levelling up” agenda were three reasons why firms should invest in the UK.

Addressing business leaders at the Science Museum, Mr Johnson said the Covid-19 pandemic showed the need for governments and the private sector to work together to tackle a global crisis – with a similar effort now needed to address climate change.

Ahead of the Cop26 climate change summit in Glasgow, which starts on October 31, Mr Johnson told investors: “I can deploy billions – with the approval of the Chancellor, obviously – but you in this room, you can deploy trillions.”

Mr Johnson said there was 24 trillion US dollars represented in the room at the Science Museum summit in London.

“I want to say to each and every one of those dollars, you are very welcome to the UK and you have come to the right place at the right time.”

Well, the news that the PM compared himself to Moses has left many, as ever, scratching their heads on social media.

Related: ‘You haven’t got a clue’: Farage slammed over his knowledge of Ireland live on TV