London’s fire service had its busiest day since World War Two at the end of July as temperatures hit record highs. 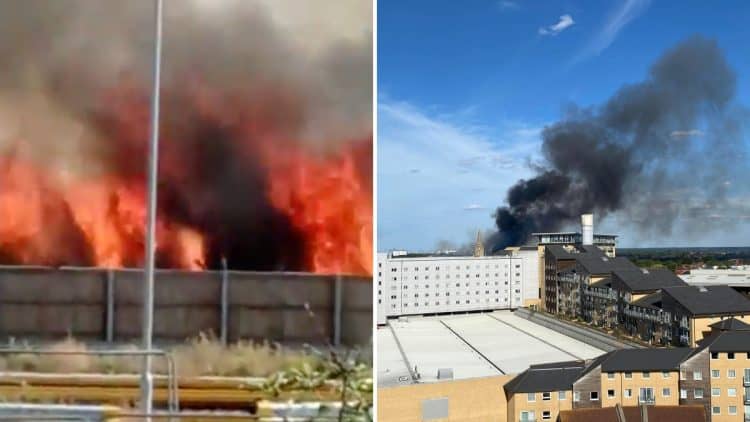 Dozens of firefighters saved about 30 homes when they tackled a blaze involving trees, hedgerows, shrubs and decking in west London.

London Fire Brigade (LFB) said 10 fire engines and about 70 firefighters were called to the blaze on Hereford Road in Feltham on Sunday at 4.35pm.

About 60 residents were evacuated from their homes due to the amount of smoke.

“Their hard work has saved approximately 30 homes in Hereford Road.”

The current seven-day weather forecast shows that temperatures will soar past 30C in London for FOUR consecutive days, starting from Wednesday 10 August.

The heatwave is likely to hit a peak on either Friday or Saturday, where the mercury could hit 33C.

With many Britons enjoying a prolonged spell of hot weather, the reality of a dry and arid summer season is already starting to affect the UK.

Several hosepipe bans have been announced already, and Britain recently saw temperatures hit 40C for the first time in history.

London’s fire service had its busiest day since World War Two at the end of July as temperatures hit record highs.

The capital was one of 15 areas around the UK to declare a major incident, with the fire brigade receiving 2,600 calls across the day.

A resident of the village said it was “like a scene from the Blitz” after around 19 houses were destroyed, with people left stranded after fires first seen in back gardens rapidly tore through rows of houses.

An entire street became engulfed in flames at one point, with neighbours gathering together to seek refuge in a local church, residents said.

Speaking to BBC Radio 5 Live, Tim Stock said: “It was like a warzone. Down the actual main road, all the windows had exploded out, all the rooves had caved, it was like a scene from the Blitz really.”

Related: FOUR more regions set for hosepipe ban – will London be next?