It's very, very rare we get one of these warnings from the Met Office. But the fire risk for the week ahead poses a 'serious threat'. 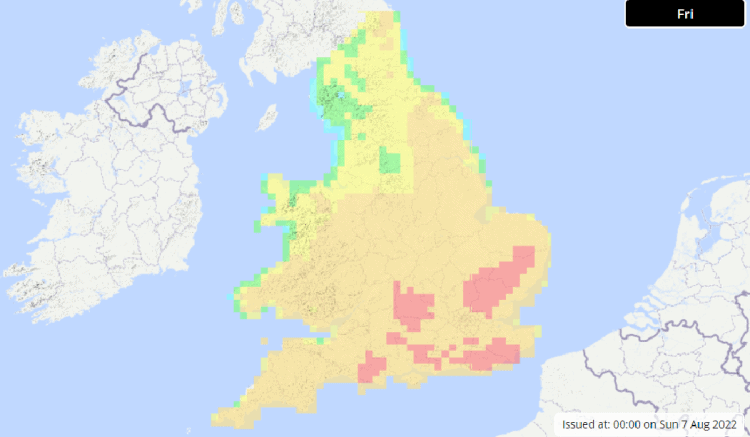 It’s been a long, hot summer – and the week ahead is set to bring more scorching temperatures to the UK. Yet another heatwave is taking shape over the next few days, and the Met Office are issuing a new alert about potential fire risks across the country.

The current seven-day weather forecast shows that temperatures will soar past 30C in London for FOUR consecutive days, starting from Wednesday 10 August. The heatwave is likely to hit a peak on either Friday or Saturday, where the mercury could hit 33C.

With many Britons enjoying a prolonged spell of hot weather, the reality of a dry and arid summer season is already starting to affect the UK. Several hosepipe bans have been announced already, and Britain recently saw temperatures hit 40C for the first time in history.

So, for all the full beer gardens and busy ice-cream vendors, there are some rather serious factors to contemplate. Professor Richard Betts is a climate scientist for the Met Office, and he’s drawn the public’s attention to their latest Fire Severity Index readings.

Who is facing an ‘exceptional fire risk’ this week?

The FSI, is an assessment of how severe a fire could become if one were to start. It is not, however, an assessment of the risk of wildfires occurring. Factors such as wind speed, temperature, time of year and rainfall are all considered.

“With UK temperatures rising and very little rain, the landscape will dry out more, further increasing risks of wildfire Fire Severity Index already Very High across wide areas By Friday, rising to EXCEPTIONAL in many places.” | Professor Richard Betts, of the Met Office

According to the FSI, a number of regions are now looking at ‘exceptional fire risks’ for Friday 12 August. They include: