“They are destroying people’s and families lives. "The Windrush generation and their relatives deserve better and need Windrush period to be widened. They need protection and not punishment." 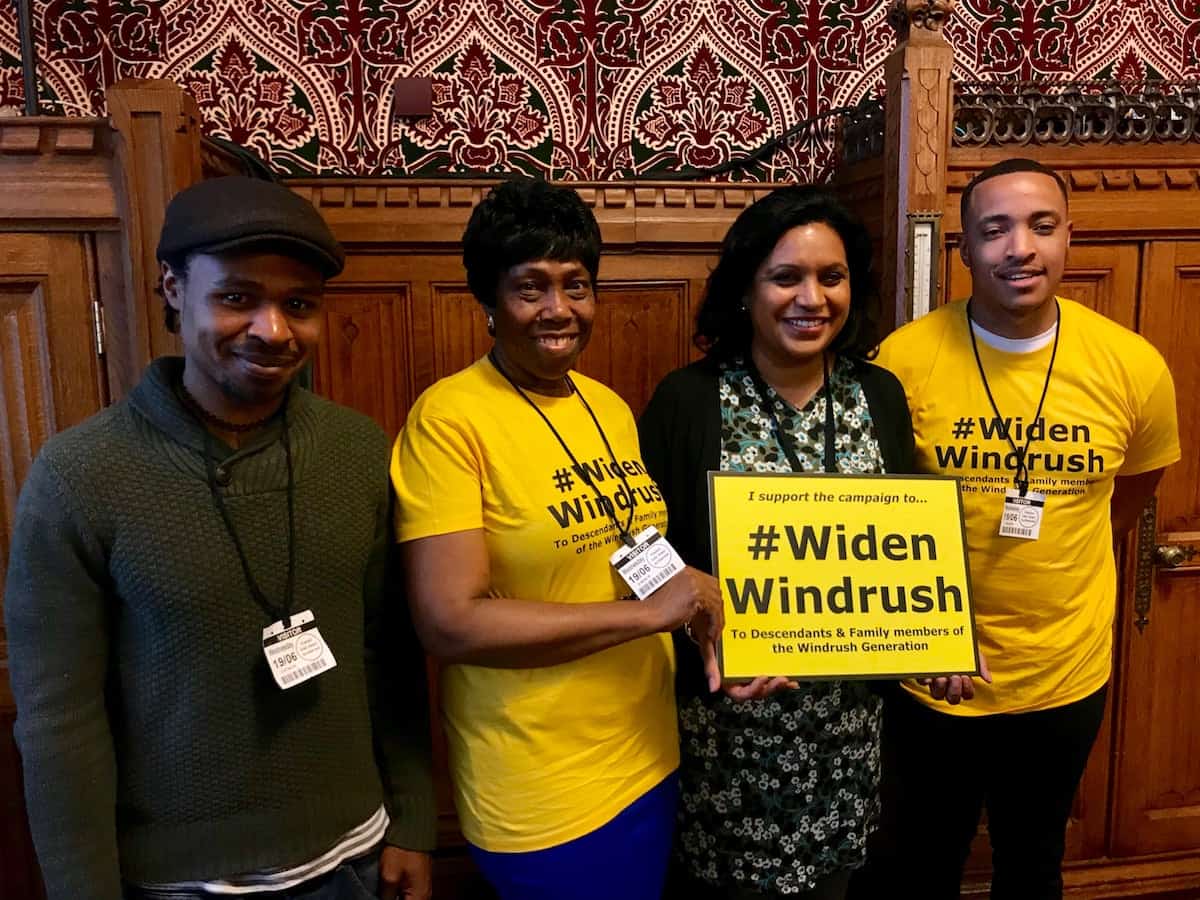 Family members of the Windrush generation who have faced deportation, detention and discrimination from the Home Office were invited to lobby their MPs by Janet Daby ahead of a parliamentary debate to urgently widen the Windrush Scheme.

The Labour MP wants MPs to consider whether the Windrush Scheme is working and whether it should include many family members who have faced the worst abuses of Theresa May’s “Hostile Environment.”

The Windrush Scheme was set up to address the difficulties faced by members of the Windrush Generation, large numbers of whom were prevented from working and subjected to detention or removal from the country they have lived in for decades.

This had been exacerbated of late as a result of Hostile Environment policies which led to the resignation of former Home Secretary Amber Rudd for misleading Parliament over Home Office targets. .

The Windrush Taskforce was established to investigate and expedite these cases without fees and ensuring speedy documentation was issued.

Yet 600 people have been refused by the Windrush scheme and many went to the House of Commons to lobby their MPs and tell their shocking stories yesterday.

We spoke to relatives of the Windrush generation which helped rebuild postwar Britain. They had been threatened with deportation, detained, lost relatives deported to countries where they were murdered, and been forced into penury – unable to work after years of contributing taxes to the UK.

Janet Daby MP told families gathered in the House of Commons committee room how her constituents had been “treated like criminals” by immigration authorities.

“It is intensely wrong,” added the Lewisham East MP, recounting how she told Home Secretary Sajid Javid he was behaving like Enoch Powell for his blasé attitude to people from their communities being detained and deported amid a lack of information and a lack of accountability.

“He was carrying out what Enoch Powell wanted to do,” explained the Lewisham East MP. “Our parents, our grandparents were invited into the country and he wanted to send them back.

“When people first came into the country it was a hostile environment… and it’s as hostile now. And all he’s doing is retraumatising our community.”

Those traumatised include grandmother Jessica Eugenie, who has paid taxes for almost 40 years, and was sacked from her charity job last year – because she couldn’t prove her right to remain.

Or Dexter Bristol, 58, who collapsed and died in the street after stress caused by what an inquest heard were “racist and xenophobic” government immigration policies. Dexter who came to the UK with his mother from Grenada aged eight was sacked from his cleaning job, then denied benefits as officials questioned if he was in the country legally.

Two grandmothers The London Economic revealed had been detained for months, threatened with deportation to Jamaica on a secretive charter flight at the time Prime Minister Theresa May and Home Secretary Amber Rudd were apologising and vowing that the Windrush generation would not be facing any more deportations are among those who have still not been accepted by the scheme.

Yvonne Smith and Yvonne Williams, aged 63 and 59, have extensive British families, who came to the UK as part of the Windrush Generation.

Great grandmother Eulalee Pennant told those gathered in parliament yesterday about the heartbreaking cruelty of her case. Eulalee’s uncle had come to the UK with the Windrush generation, her grandfather had served in the British armed forces for 49 years, and her cousins, daughter, grandchildren and great-grandson were British.

Eulalee showed me her National Insurance card. After paying taxes in the UK for years she was detained and spent her Sixtieth birthday in the notorious immigration Yarls Wood detention centre facing deportation.

Eulalee not only missed out on the celebrations her British family had planned for her Sixtieth, but contracted a serious stomach bug in detention causing her to vomit blood, an infection that she still suffers from a year on.

“The Home Office tried to deport me while I was still vomiting blood,” recalled Eulalee. “‘I was taken unlawfully,’ I told them. ‘I am not a criminal and even if I was a criminal I would still have rights.’”

“I tried to regularise our status in 2003 for myself and my son,” explained Eulalee, 61. “Then my son was picked up in 2003 by the immigration unit. He was detained from 2003 fighting his case until 2008, his pregnant partner following him from one detention centre to the next.

“They deported him to Jamaica in December 2008. I never saw my son again. He was murdered in Jamaica in June- five months later.”

“I sent the Home Office my passport in 2003 and they never returned it. They claimed repeatedly not to have my passport. Only in court in 2018 they finally admitted they had not sent it back.”

Eulalee has been unable to work since 2003, has spent thousands on legal fees and showed us her medical records and the £20,000 she had to post to be bailed “like a dangerous criminal.”

Father-of-three Owen Haisley, 46, also lobbying his MP (Manchester Central MP Lucy Powell who expressed her support) yesterday explained how he too was being punished.

“Right now we are living in limbo. We can’t work. We can’t even claim benefits or rent privately,” said the former community worker, father of three British children, and dance music legend on the Manchester scene.

I first spoke to Owen, a well-known DJ and MC, when The London Economic revealed the Home Office resumed controversial chartered deportation flights to Jamaica, with Windrush relatives caught in a swoop this February.

When I spoke to Owen in the Heathrow detention centre he was locked up in with other Windrush relatives, in his broad Manchester accent, Owen explained he would have to learn how to speak with a Jamaican accent to fit in the country he had not been back to since he left aged 4.

Owen also described reports of people deported to Jamaica from UK being attacked, murdered and stigmatised like criminals.

“I went to school, was granted a driving license, a National Insurance number, worked in music projects helping thousands of young people, was saving up a deposit for a mortgage and got on with my life never thinking a passport would make a difference. I am not here illegally,” said Owen.

“The home office said to me you can bring your children up by Skype. That’s totally outrageous.”

Trevor Rene’s grandfather settled in the UK in 1948, also one of the Windrush generation who came from the Caribbean to rebuild postwar Britain.

After serving six years in the British armed forces, Trevor was returning from a military exercise in Denmark when his troubles with immigration started. He explained how he had been unable to work since 2014.

“The Home Office called my unit and told my unit I am an illegal entrant – as if I was an illegal entrant. I did not come to Britain in the back of a lorry,” said Trevor. “Up to last month, every month I had to report at a poice station like I was a criminal.”

Trevor – who met yesterday with his Conservative MP Grant Shapps – says his NHS secretary British wife earns over the threshold required for him to have a spouse visa, yet he was also locked up and threatened with deportation to Dominica.

Trevor said he and his wife Diane could not afford the cost of a solicitor to fight his legal battles and were not entitled to legal aid.

“The Government’s immigration law and policy is inherently unjust towards Caribbean and commonwealth citizens who arrived during the Windrush period,” Janet Daby MP told The London Economic.

“No compensation has yet been paid by the Government for their wrong doings and their abuse towards the Black community continues.

“This generation and their descendants are suffering and continue to suffer insurmountably when they are at the hands of the Home Office: delays to outcomes; withdrawal of their passport; setting high bails; threatening deportation and retaining people for years as though they are criminals.

“They are destroying people’s and families lives.

“The Windrush generation and their relatives deserve better and need Windrush period to be widened. They need protection and not punishment.”

“The Windrush Scheme is not fit for purpose,” added Karen Doyle of MovementForJustice.co.uk, who are calling for the families of those who originally came to the UK from the Commonwealth and may be facing such discrimination to come forward with their experiences so MPs can see the suffering caused by not extending the Windrush Scheme.

“Over 600 people have been refused by the scheme, there is no legal right of appeal, instead just an internal review which only 20 have taken up,” she added.

Movement for Justice are preparing to mount a legal challenge to the narrowness of the Windrush Scheme.

“The Home Secretary and Immigration Minister have been resolute in their determination to right the wrongs experienced by the Windrush generation.

“A lessons learned review, which will have independent oversight, will help ensure that we have a clear picture of what went wrong and how we should take this forward.

“At the same time, our taskforce is helping those who have struggled to demonstrate their right to be here are supported to do so and we have committed to setting up a compensation scheme.”

More information on who is eligible for support under the Windrush Scheme can be found here: https://www.gov.uk/guidance/windrush-scheme