After over two weeks of calls for the Home Secretary to resign over an “out of control” and “institutionally racist” Home Office, news emerged tonight that Prime Minister Theresa May has finally accepted Home Secretary Amber Rudd’s resignation. Both Amber Rudd and her predecessor Theresa May have been under intense scrutiny over the fiasco that […]

After over two weeks of calls for the Home Secretary to resign over an “out of control” and “institutionally racist” Home Office, news emerged tonight that Prime Minister Theresa May has finally accepted Home Secretary Amber Rudd’s resignation.

Both Amber Rudd and her predecessor Theresa May have been under intense scrutiny over the fiasco that has left many in the Windrush generation of Commonwealth immigrants and their families facing wrongful deportation. A shocking mix of Home Office incompetence, harsh removal targets and Theresa May’s “hostile environment” had been exposed in several tragic stories over the past weeks.

But the final nails in Amber Rudd’s coffins were her appearing to mislead MPs twice about the removal targets she had promised Theresa May she should achieve by diverting resources from crime fighting to removals.

Amber Rudd had told MPs that she had no knowledge of her department’s targets, even though evidence emerged that she had been informed of them.

Number 10 tonight confirmed that Theresa May had accepted Rudd’s resignation. This came after a weekend of disbelief by many commentators that the Home Secretary had not resigned earlier when revelations emerged, contradicting her statements to MPs.

The Home Secretary had continued to insist that she was the best placed person to sort out the Home Office mess that led to people from the Windrush generation being wrongly removed.

On Friday Rudd had ignored calls to resign over breaking the Ministerial code and instead announced that she would answer MPs’ questions yet again on Monday.

1/4 I will be making a statement in the House of Commons on Monday in response to legitimate questions that have arisen on targets and illegal migration.

And she still denied knowledge of any targets on Friday too.

2/4 I wasn't aware of specific removal targets. I accept I should have been and I'm sorry that I wasn't.

Further revelations by The Guardian this weekend of a letter from Rudd to Theresa May promising an achievable 10% more forced removals of people from the country was yet more evidence that Rudd had misled MPs: 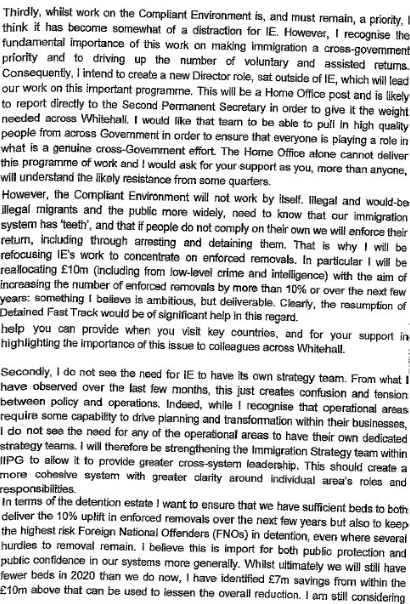 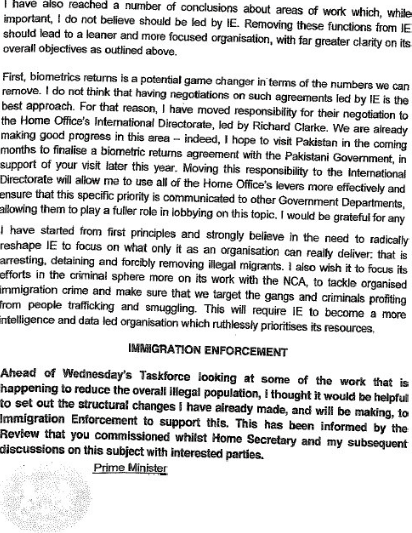 Amber Rudd is said to have called Theresa May to tell her of her decision. A No 10 spokesman said: “The Prime Minister has tonight accepted the resignation of the Home Secretary.” 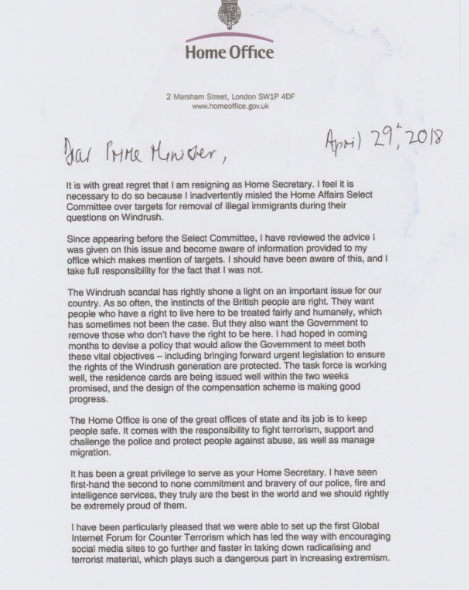 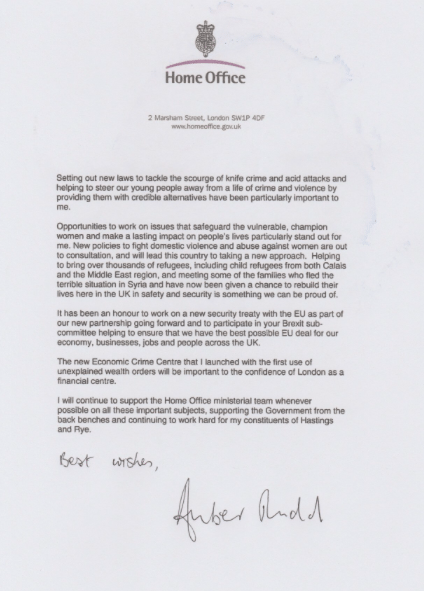 Former Immigration Minister Brandon Lewis had today admitted he had seen a bombshell memo over targets for deporting illegal immigrants – targets his boss Amber Rudd denied existed despite being copied in on the document.

Commentators such as the BBC’s Laura Kuenssberg had speculated about the weakness of Theresa May’s position without Amber Rudd to shield her from the consequences of her policies as Home Secretary 2010 – 2017.

Tonight the BBC Political Editor tweeted: “Rudd went because wasn’t possible to be sure what else might have emerged from paper trail, and however inadvertently, it seems she misled parliament,” and warned: “Rudd will be powerful Remain voice on backbenches – and only a small number in Cabinet who are close to May’s view on immigration – suggested part of Rudd’s problem was she delegated too much because she wasn’t really behind the overall thrust of policy.”

On Friday last week, it was revealed that Amber Rudd had sent a memo to Theresa May boasting that she would increase enforced removals by 10% over the next few years which she said was “ambitious but deliverable,” despite cuts in Home Office staff and an increasing backlog of many waiting for years with no immigration status. Rudd promised the PM she would achieve the target by diverting money for crime-fighting to her immigration enforcement programme.

Yet when addressing the Home Affairs Select Committee on Wednesday, Amber Rudd had insisted: “We don’t have targets for removals.”

As Yvette Cooper questioned her about when the targets for removals had been set, Amber Rudd had insisted “I don’t know what you are talking about.”

Was this the moment Amber Rudd revealed she has no grip on #Windrush or her department?
"Targets for removals when were they set?" asks @yvettecooper
"Err we don't have targets for removals," says Amber Rudd.
"But you did," says Cooper.
"I don't know what you are talking about." pic.twitter.com/2WVMSjD662

But Lucy Moreton, general secretary of the Immigration Service Union told MPs that there was a national target, broken down regionally to remove people in the UK illegally, and staff were under “increasing pressure” to meet it.

Rudd was then asked to explain the Windrush mess in the House of Commons. To MPs’ dismay, the Home Secretary insisted that she wasn’t aware of Home Office staff operating to removal targets as she apologised for the distress caused to people wrongly threatened with deportation by her department.

Then on Friday The Guardian newspaper leaked a letter addressed to her outlining the Home Office’s specific target of 12,800 removals in 2017/18.

The Home Office memo was sent to Rudd, the then-immigration minister Brandon Lewis, as well as her special advisors detailing the targets set by her department for the number of people to be removed.

This again suggests that Rudd misled MPs more than once, testifying to the Home Affairs Select Committee that her department had no targets for removals, then insisting to parliament that she was unaware of these targets.

A point raised by David Lammy:

Meanwhile further evidence emerged that Theresa May as Home Secretary had been warned as early as two years ago about the Windrush scandal. All of which makes will leave the Prime Minister in the spotlight.

The Windrush debacle involves people from Commonwealth Caribbean countries who settled in the UK from the late 1940s to the 1970s to help rebuild postwar Britain, as well as their relatives. Many have found themselves treated as illegal immigrants if they can’t provide evidence of their continuous life in the UK.

It has emerged that the Home Office despite warnings destroyed their disembarkation slips in 2010 when Theresa May was Home Secretary which has not helped matters. (Theresa May told the House of Commons that she had not made the decision, the previous Labour Government had, but minutes later her spokesman was blaming civil servants.)

Neither has the “hostile envionrment” that Theresa May sought to create for “illegal immigrants,” which included targets for deportation and unsympathetic Home Office staff. A Home Office whistleblower last week described how staff had a “gotcha” attitude towards people struggling to get hold the reams of documentation necessary.

The Windrush generation have been threatened with deportation, lost their jobs or been refused access to medical treatment.  all of which was described as “institutional racism” by Labour’s shadow women and equalities minister Dawn Butler.

Dawn Butler, said Theresa May was “presiding over a government that has policies that are institutionally racist”. And the SNP’s home affairs spokeswoman Alison Thewlis said the Home Office was clearly “out of control” and it was “no surprise” targets existed as there was “a litany of callous incompetence” at the Home Office.

This weekend in emerged that despite the Prime Minister’s apologies to the Windrush generation so badly treated, the Home Office had told garnmotehrs that they are to be deported on a secret chartered Home Office flight to Jamaica: