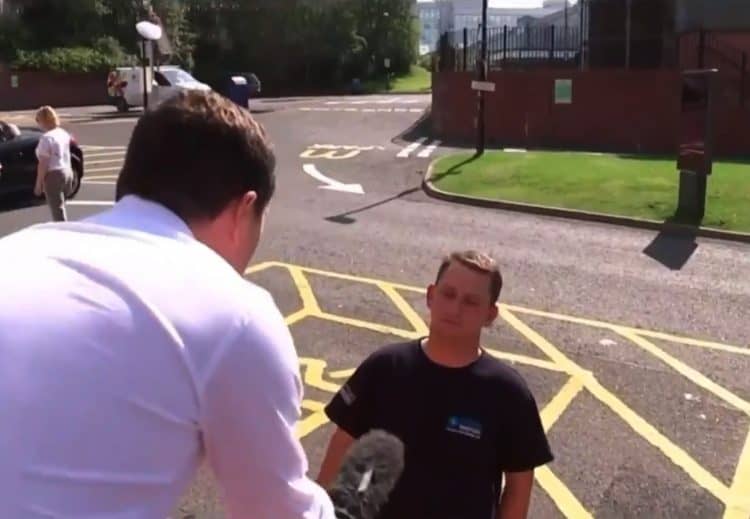 Due to a combination of Brexit-related lorry driver shortages and Covid-19 restrictions, supply issues have made the fast-food chain’s milkshakes and bottled drinks unavailable in over 1,000 outlets in England, Scotland and Wales – but not Northern Ireland.

The news follows Nando’s restaurants in the UK also having had to close 50 restaurants last week due to supply issues.

In a very serious ITV report on the story, one bemused Scotsman said he felt “distraught” after being unable to order two strawberry milkshakes from a drive-thru.

Other customers also expressed their dismay, with one saying he will be forced to “go to the ice cream shop around the corner” instead.

Since being broadcast, various clips of the interview have gone viral on Twitter, causing plenty of hilarity.

Alongside the clip, one viewer tweeted: “ITV News making the McDonald’s milkshake shortage out like a global pandemic.”

Another tweeted the video alongside the caption: “We are living in a simulation”.

One Twitter user said: “Please…please…tell me this is a spoof news report? I am aware that Mcdonald’s have some milkshake issues but for the love of God surely STV didn’t run a news report on it?”

“Can’t tell if this is a parody or genuinely serious. Reminds me of ‘The Day Today’,” said another.

“Our local McDonald’s doesn’t have milkshakes 80% of the year anyway”, added one user.

Another added: “This McDonald milkshake piece on ITV evening news is actually hilarious”.

One user wrote: “Imagine spending the rest of your life being known as the distraught milkshake man.

In the meantime, McDonald’s promises to be “working hard to return these items to the menu”, according to a spokesperson from the fast food chain.

He said: “Like most retailers, we are currently experiencing some supply chain issues, impacting the availability of a small number of products.

“Bottled drinks and milkshakes are temporarily unavailable in restaurants across England, Scotland and Wales.

“We apologise for any inconvenience, and thank our customers for their continued patience.”

Logistics UK, which represents freight firms and the British Retail Consortium, said in a letter to the government that a “current shortfall of around 90,000 HGV drivers is placing unsustainable pressure on retailers and their supply chains”.

“While there was a shortage of HGV drivers prior to the Covid-19 pandemic and Brexit, these two events have exacerbated the situation.

“The pandemic halted driver training and testing for more than 12 months, while an estimated 25,000 EU drivers returned home during the pandemic and following the end of the transition period.”