“This beautiful natural habitat will be destroyed for the sake of a few wealthy people living on the estate." 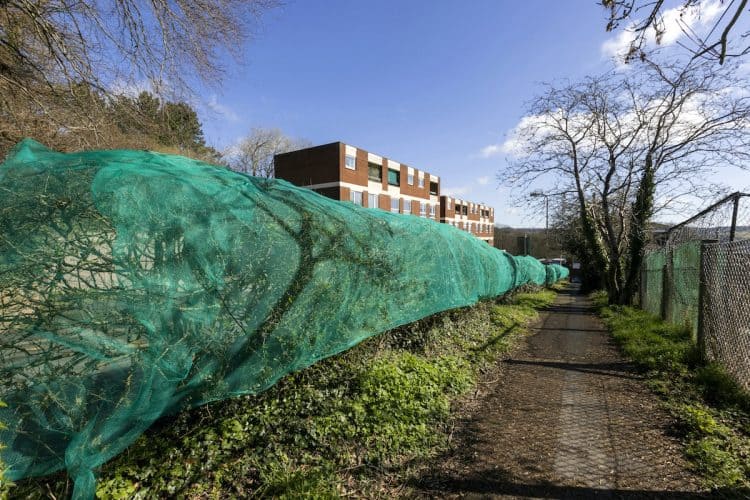 Angry residents have blasted “cruel” developers who have covered one of the UK’s oldest urban hedgerows in nets to keep birds out during peak nesting season.

Developers Ling Homes have netted the 100-year-old hedgerow before they rip it out to widen a road next to an exclusive gated community of 11 luxury homes.

The move is thought to be because, under the Wildlife and Countryside Act 1981, it is unlawful for them to cut down hedges containing nesting birds.

Dudley Council have demanded the hedgerow is removed to make way for a road-widening scheme next to a newly built luxury estate in Halesowen, West Mids.

The Copper Beech development on Bundle Hill consists of 11 large 3-5 bedroom detached homes costing around £400,000 each.

Residents have reacted with fury after the large anti-bird nets were hauled over the 560ft long hedgerow which grows opposite the estate’s gated entrance.

Factory manager Grant Johnston, 50, said: “I’ve lived in the town all my life and I remember the hedgerow as a kid.

“To see it completely covered in nets is very sad because they are cruel and kill birds and other wildlife, particularly at this time of year when they are nesting.

“It also means this loved landmark, which I understand is one of the oldest urban hedgerows in the whole of the country, will be lost forever.

“It seems utterly unnecessary to rip this up just so a few rich people can have more room to drive their flash cars into their private estate.

“No one around here wants this to happen, even the developers were fighting it.”

Mum-of-two Debbie Long, 34, said: “This beautiful natural habitat will be destroyed for the sake of a few wealthy people living on the estate.

“There are only 11 houses on the site anyway. It seems ridiculous to chop it down just for a few privileged people who can afford to live behind big gates.”

Ling Homes say they have reluctantly agreed to rip out the hedgerow which has grown on the site since the early 1900s.

Matthew Ling, construction director at Ling Homes said the hedge will be removed this summer at a cost of £70,000.

He said: “The hedge has been there 100 years – the sensible thing would be to leave it there.

“It’s pointless because you will never get two-way traffic on that road because of the cars that park by the flats.

“We would be willing to give the £70,000 cost to the school or to charity if the council would agree the work doesn’t have to be done, but it seems without more public support it will have to go ahead.

“It’s not 100 per cent effective, but it’s what we have to do. It’s part of our condition that it be netted as we can’t do the work until August. If we didn’t net it we couldn’t take it out.”

Cllr Simon Phipps, cabinet member for regeneration and enterprise, said: “The new development on Bundle Hill was approved with the condition that this road must be improved by the developer of the new houses.

“This involves road widening, which impacts on the hedgerow as it currently restricts the width of the road.

“These works are in the interest of public safety given this is a hazardous access road for residential developments and a primary school.

“Ultimately, the safety of local people must be prioritised.

“The majority of the work is expected to take place over the summer holidays so as not to cause major disruption to local people during term time.

“We will continue to work with the developer to review progress and ensure they carry out that work appropriately and safely.”

The netting over the hedge is controversial as it could allow birds to become stuck and even killed as a result.

It is designed to stop birds nesting, but has a huge gap. The method of netting hedges has been criticised by conservationists.

There was national outcry over the practice, with a petition calling for it to be made illegal attracting more than 300,000 signatures, saying developers should “enhance natural environments, not destroy them.”

The Government has said that bird netting should be “kept to a minimum, and only used to help protect birds during development”, but stopped short of outlawing the practice.