All 53 whose deaths were announced on Saturday had underlying health conditions and the eldest was 94, NHS England said. 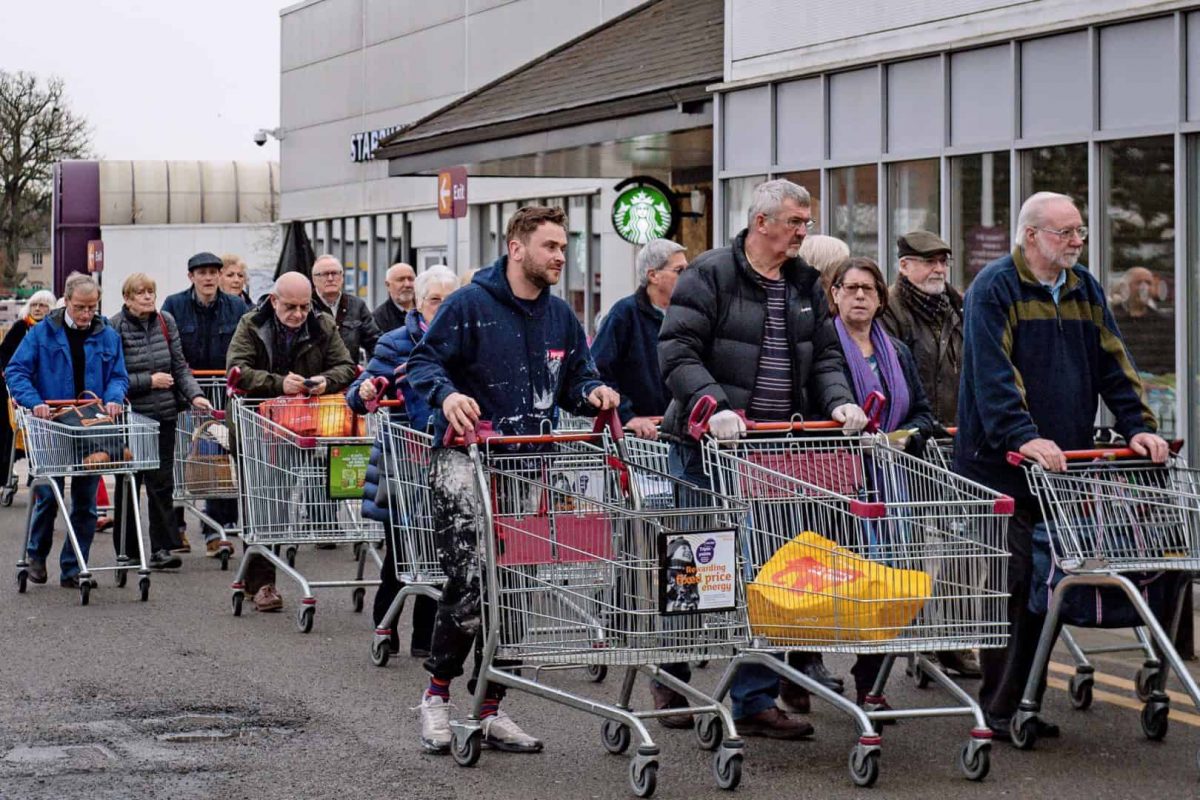 The UK’s coronavirus death toll topped 200, as crisis panic buyers were told they “should be ashamed” for causing needless shortages for NHS staff.

The number of people across the country who have died after testing positive for Covid-19 reached 233, with a 41-year-old patient thought to be the youngest victim in the UK since the outbreak began.

All 53 whose deaths were announced in England on Saturday had underlying health conditions and the eldest was 94, NHS England said.

Wales’s death toll has risen to five, Scotland’s now stands at seven and Northern Ireland’s remains at one.

The new figures came as the retail industry insisted there was enough food for everyone and ministers said rationing was unnecessary.

Environment Secretary George Eustice said there was no shortage of food in the country amid the coronavirus pandemic, with manufacturers having increased production by 50%.

At the daily Downing Street press conference, NHS England national medical director Stephen Powis said the country should be ashamed that key medical staff were left unable to buy food at the end of their shifts.

Mr Eustice said that people buying more than they needed meant key NHS workers fighting the disease were faced with empty shelves when they tried to shop.

He said the message to the public was: “Be responsible when you shop and think of others.

“Buying more than you need means others may be left without. We all have a role to play in ensuring we all come through this together.”

Helen Dickinson, chief executive of the British Retail Consortium, said there was “plenty of food” in the supply chain.

“The issue is around people and lorries, so getting that food right into the front line onto our shelves, which is why we’ve seen some shortages,” she said.

“There is a billion pounds’ more food in people’s houses than there was three weeks ago, so we should make sure we eat some of it.”

Mr Powis referred to a video posted online by a critical care nurse in tears after she was unable to find anything to buy to eat at the end of her shift.

“Frankly we should all be ashamed that that has to happen. It is unacceptable. These are the very people we will all need to look after perhaps us or our loved ones in the weeks ahead,” he said.

“It is critical that by not stockpiling, by not selfishly shopping, that our health workers are able to get access to what they need too.”

Mr Eustice played down the prospect of the Government imposing rationing, saying ministers’ preference was to leave it to the retailers to decide whether purchases should be limited.

“The reality is that most of the supermarkets are already, of their own accord, putting limits on certain items so I don’t think it is necessary or appropriate for the Government to dictate this,” he said.

“The crucial thing is we need people to calm down and buy only what they need and to think of others when they are purchasing.”

The appeal came as tens of thousands of restaurants, cafes, and pubs across the country remained shut after Boris Johnson ordered much of the hospitality and entertainment sector to close.

The Prime Minister said the measures were needed to slow the spread of the disease and prevent the NHS being overwhelmed with new cases.

Mr Powis said it was “absolutely crucial” that the entire country followed advice on reducing social contact if the strategy was to work.

“This is all our problem and if we do it together, it will be an effective strategy.

“If you do it, you follow the advice, you will be saving somebody’s life.

“This is the time in your lifetime whereby your action can save somebody’s life. It is as simple and as stark as that.”

Meanwhile in another unprecedented move, NHS England announced that it had struck a deal with the country’s independent hospitals to provide thousands more staff and nurses to the public healthcare system.

Under the agreement, the independent sector will reallocate practically its entire national hospital capacity en bloc to the NHS.

It will be reimbursed “at cost” – meaning that it will not make any profit for doing so.

NHS England chief executive Sir Simon Stevens said they were taking “immediate and exceptional action” to gear up to deal with an unprecedented global health threat.

“The NHS is doing everything in its power to expand treatment capacity, and is working with partners right across the country to do so,” he said.

It follows Chancellor Rishi Sunak’s dramatic announced that the Government is to underwrite the wages of millions of workers at risk of losing their jobs as a result of the crisis.

David Hare, the chief executive of the Independent Healthcare Providers Network, said they stood ready to support the NHS for “as long as needed”.

“We have worked hand-in-hand with the NHS for decades and will do whatever it takes to support the NHS in responding to this pandemic,” he said.