Almost 800 people have died in one day, with the country having almost 54,000 recorded cases of Covid-19. 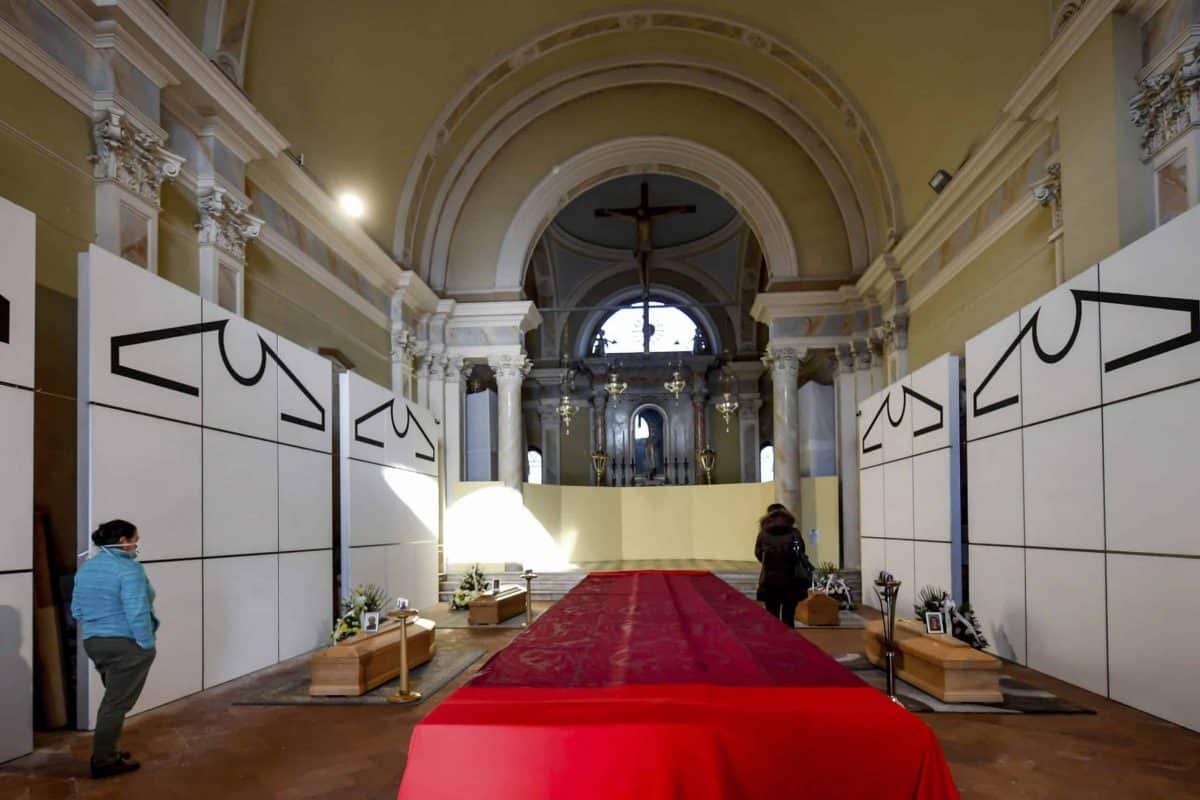 Coffins wait to be transported to cemetery, in the church of Zogno, near Bergamo, Northern Italy, Saturday, March 21, 2020. Italy’s tally of coronavirus cases and deaths keeps rising, with new day-to-day highs: 793 dead and 6,557 new cases. For most people, the new coronavirus causes only mild or moderate symptoms. For some it can cause more severe illness. (Claudio Furlan/LaPresse via AP)

Italy’s grim coronavirus toll continues to soar, with officials announcing 793 deaths and 6,557 new cases in the space of one day.

The country, which at the heart of western Europe’s outbreak, now counts 53,578 known cases, and 4,825 deaths in total.

More than 60% of the latest deaths occurred in the northern region of Lombardy, whose hospitals have been reeling under a staggering case load that has left intensive care beds hard to find and respirators in short supply.

Officials said that on Sunday a team of 65 Cuban doctors and nurses with experience in battling Ebola outbreaks will arrive in northern Italy to help in the hard-hit Lombardy town of Cremona.

Silvio Brusaferro, the head of the national superior health institute, said Italian health officials realise they need to shorten the time between emergence of symptoms and diagnosis. Currently that lag is about five days, he said.

The new increases come nearly two weeks into a national lockdown in Italy in a desperate bid to contain the contagion.

In Spain, almost a week into tight restrictions on free movement and the closure of most shops, police intensified their efforts to enforce confinement rules with fines and extra patrols to stop city-dwellers with second homes leaving town for the weekend.

Spain now has the third-highest number of infections worldwide. On Saturday it reported almost 5,000 new cases in the past day, bringing the total to nearly 25,000. The death toll rose to 1,326, up from 1,002 on Friday.

As hospitals and nursing homes buckle under the burden of the virus outbreak, Spanish health authorities have acknowledged that some intensive care units in the hardest-hit areas are close to their limit, and warned that they expect infections to continue to rise before measures to reverse the trend have an effect.

The army is building a field hospital with 5,500 beds in a convention centre in Madrid, where hotels are also being turned into wards for virus patients without serious breathing problems.

Dr Olga Meridiano, who treated victims of a 2004 jihadist bomb attack in Madrid that killed nearly 200 people and wounded many more, said nothing prepared her for the national health tragedy that Spain is now enduring.

“I have been through many situations,” she said, “but nothing is like this.

“If we keep seeing daily increases of 23%, this cannot be withstood much longer.

“We are doubling up on our shifts. We have strategies to hang in there this week, but beyond that we need the situation to improve because we professionals are bearing a lot of pressure, including emotional.”

He said the US government is seeking to increase hospital bed capacity by 50% – up to 25,000 more beds. Officials have also identified two million protective masks to send to hot spots.

The state is reviewing four possible locations for temporary hospitals, which would be operated by the Army Corps of Engineers.

New York has seen about 10,400 coronavirus cases, with about 1,600 people taken to hospital.

The spread of the rapidly advancing virus has strained health care systems across the globe, and three American states with a combined population of 70 million are moving to restrict residents to their homes.

California started restricting residents on Friday, and New York and Illinois are to follow this weekend. Connecticut and Oregon are preparing to do the same.

In Germany’s southern state of Bavaria, town squares were empty. But shoppers still flocked to street markets, in a sign that restrictions were being interpreted in a patchwork fashion.

The number of confirmed cases of Covid-19 recorded in Africa rose above 1,000 on Saturday, according to the Africa Centres for Disease Control and Prevention. At least 40 of Africa’s 54 countries now have cases.

Almost 287,000 cases have been confirmed globally, including more than 11,900 deaths, according to a running tally by Johns Hopkins University. Nearly 89,000 people have recovered.

For most people, the new virus causes only mild or moderate symptoms, such as fever and cough. For some, especially older adults and people with existing health problems, it can cause more severe illness, including pneumonia. The vast majority recover.

Officials in many countries are desperate to prevent – or at least limit – a repeat of what has happened in China and southern Europe.

The coronavirus outbreak overwhelmed medical services in the central Chinese city of Wuhan earlier this year and now is pushing them to the limit in Italy, Spain and France.

Workers near Moscow are rushing to build a clinic to treat hundreds of coronavirus patients as Russia prepares for a wave of infections.

China has been sending aid to several European countries, promoting its expertise and experience gained from fighting the outbreak at home. An Air China flight carrying 18 tonnes of medical supplies including hundreds of thousands of surgical and protection masks landed in the Greek capital, Athens, on Saturday morning.

As the pandemic has eased in Asia, China and other parts of the region are now trying to avoid importing fresh cases from Europe, the US and elsewhere.

China reported on Saturday that its mainland had no new home-grown cases of the disease for the third straight day, but 41 imported ones in the previous 24-hour period.

Restrictions on movement are being eased gradually in China as it tries to restart its economy without bringing back the disease.