“When your own government screws you over, forgets about you, and essentially makes you out to be a traitor to your own country, British in Europe were there for us," one Brit in the EU has said. 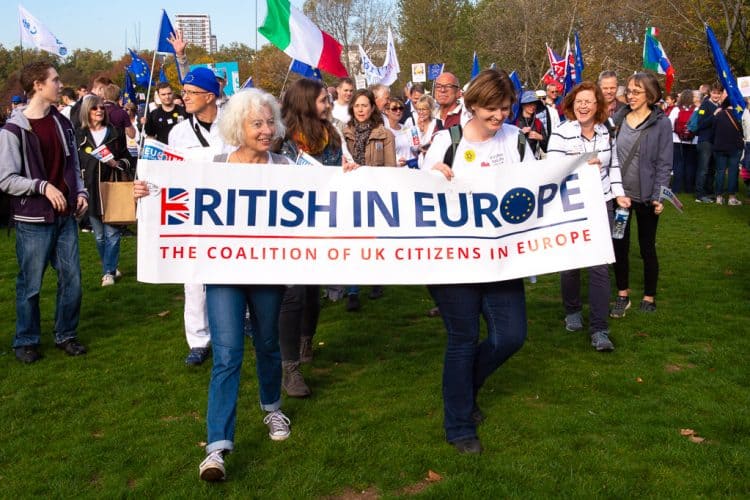 Co-chairs Jane Golding and Fiona Godfrey holding up the British in Europe banner at a pro-Europe march. Photo: Nick Gammon.

British immigrants in EU countries have expressed their regret and desperation after the biggest group campaigning for their rights in the bloc announced it will soon close down because of a lack of funding.

Criticism has emerged that the British in Europe announcement does not “bode well” for the Foreign Office under Liz Truss’ management.

Jane Golding OBE, co-chair of British in Europe and EU lawyer who has liaised with both EU officials and the UK government since Brexit, said it was a difficult decision which will “leave a big hole”.

Golding told The London Economic: “It was a tough decision to take, as we know that it will leave a big hole. We know that we have much more to contribute on citizens’ and migrants’ rights in the UK and at EU level, especially to the UK’s relationship with its emigrants, its diaspora.

“But you can’t work at a professional level through self-funding and then on a shoestring indefinitely. And apart from the funding, we are exhausted from trying to do this important work on top of our day jobs.”

James Savage, a Brit in Sweden, said the news are “desperately sad”. “Groups like this are badly needed to represent the interests of people who governments are usually quite happy to ignore,” Savage said.

And Graham Needham, a Brit in the Czech Republic, added: “When your own government screws you over, forgets about you, and essentially makes you out to be a traitor to your own country, British in Europe were there for us.

“Did the UK government fund them? Like hell they did. So sorry to see them go.”

Upon hearing the news, former Labour MEP Jude Kirton-Darling expressed gratefulness for the group’s work,, saying they “stepped up despite the personal pressure they were under, because of a vote that many couldn’t participate in”.

Similar civil rights groups such as Brexpats Hear Our Voice and In Limbo, representing Brits in the EU and EU citizens in the UK have also expressed their sadness about BiE’s closure.

A spokesperson for the In Limbo project said they are “very sad” that BiE cannot continue their “vital work”. “We’ll continue to stand with our friends in Europe,” the spokesperson added.

Suzana Carp, chair of the board at the civil rights group New Europeans, also said BiE contributed greatly to the debate about preserving citizens rights in the face of Brexit.

And she acknowledged the “fatigue and emotional toil” that those working on the matter have been feeling for the past five years.

Liz Truss and the Foreign Office have been contacted for comment.