The PM was heckled as he visited Stainforth as locals hit out at his lack of response to flooded homes. 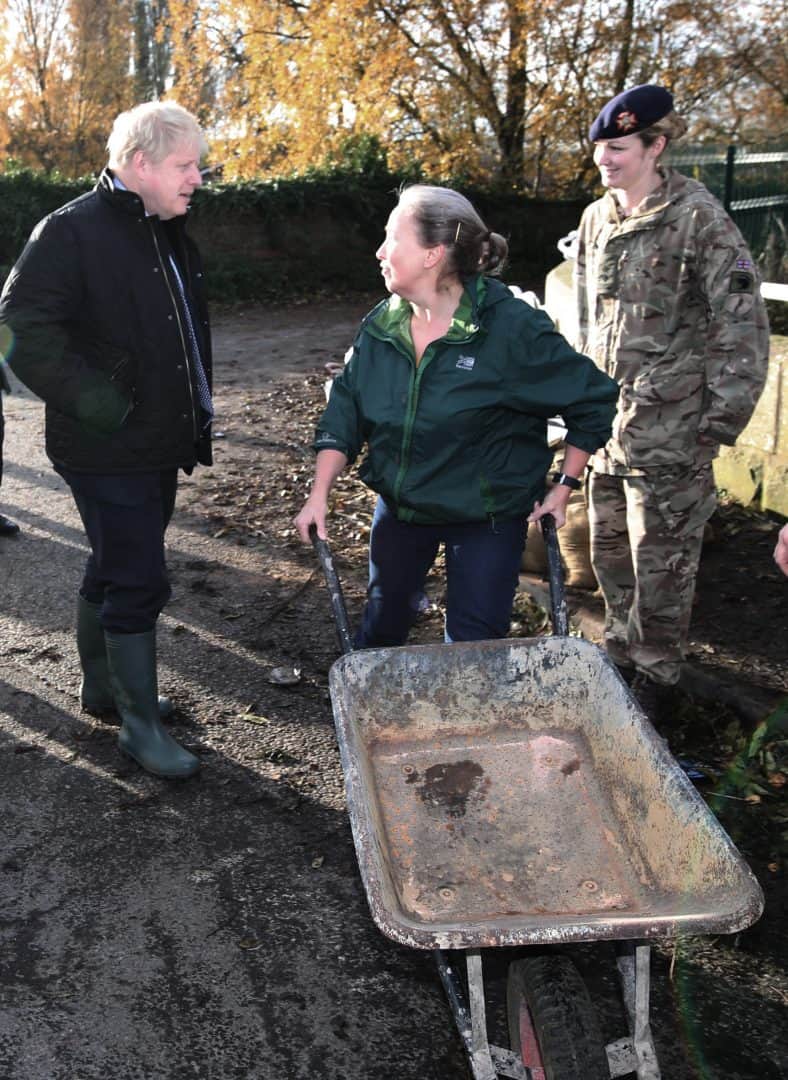 Prime Minister Boris Johnson was accused of doing nothing to help flood victims as he visited one of the worst hit areas while electioneering.

One resident in flood-hit Stainforth in South Yorkshire told the Mr Johnson: “I’m not very happy about talking to you so, if you don’t mind, I’ll just mope on with what I’m doing.”

The woman, clutching a wheelbarrow alongside the troops sent to the area to help, added: “You’ve not helped us up to press. I don’t know what you’re here today for.”

Another told him: “You’ve took your time Boris, haven’t you?”, to which Mr Johnson replied: “We’ve been on it round the clock.”

Speaking to reporters at the scene, Mr Johnson said: “I perfectly understand how people feel and you can understand the anguish a flood causes.

“The shock of seeing your property engulfed by water is huge and also the anxiety of what may still be to come and I do thank the emergency services for everything they are doing.”

Boris Johnson refused requests for interviews with the local press, instead insisting on a pooled press conference in which he gave his statement.

Mr Johnson arrived in the area as nearly 100 soldiers began assisting communities cut off by the flooding.

Personnel from the Light Dragoons laid down sandbags in Stainforth near Doncaster, attempting to shore up the village’s bridge.

The Tory Party leader was criticised for only convening the emergency Cobra committee after Labour leader Jeremy Corbyn wrote to him demanding an emergency response.

Corbyn said if the flooding had happened in Surrey in the South East, it “would have been a very different story.”

Another local, Shelly Beniston, told the Prime Minister she had helped organise supply runs to the neighbouring village of Fishlake, another area to be hit by flooding.

She said: “We’ve had no authorities helping us. We didn’t know where to start.

The help from the Army comes amid fears that further bad weather could be on the way on Thursday, with the Met Office issuing a yellow warning for rain for the whole day covering a vast region from Portsmouth to Hull.

One official from the Environment Agency told Mr Johnson that an estimated 20mm to 30mm of rain was expected to fall in the next 24 hours.

The official said that 2019 had already seen the third wettest autumn on record, adding: “We need to look at what we need – particularly in the context of a changing climate.”

There are 34 flood warnings still in place across England, in locations from Somerset and East Sussex in the South, to as far north as the Lower River Nidd near Harrogate in Yorkshire, and the Holderness Drain in east Yorkshire.

Seven flood alerts are also in place in Wales, where the Met Office is predicting further heavy rain on Wednesday.

But five severe “danger to life” warnings on the River Don in South Yorkshire have been downgraded.

On Tuesday evening, the Prime Minister warned there could be further flooding across the country after chairing a meeting of the Government’s emergency committee.

Up to £2,500 would be available for small to medium-sized businesses which have suffered severe impacts and which are not covered by insurance.

The PM also urged people in affected areas to heed the warnings of emergency services, after some residents in Fishlake remained in their homes despite being advised by Doncaster Council to evacuate.

The announcements came after both Labour and the Liberal Democrats criticised the Government’s response to flooding, which is rapidly turning into an election issue.

Jeremy Corbyn said if the flooding had happened in Surrey in the South East, it “would have been a very different story”.

He said Johnson had only called a Cobra meeting on Tuesday after he had written to the Prime Minister demanding one.

Speaking at a rally in Blackpool, Corbyn added: “More than a thousand homes have been evacuated and one woman, Annie Hall, has lost her life. Our hearts go out to her family and friends.

Boris Johnson says widespread flooding is ‘not a national emergency’