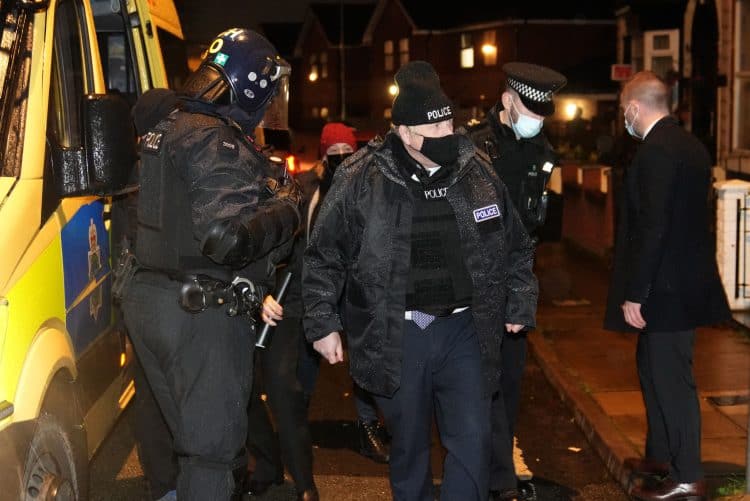 The prime minister has declared that he is ‘after’ drugs users, especially middle-class ones, in his latest crackdown on crime.

Talking to The Sun, he said: “We need to look at new ways of penalising them. Things that will actually interfere with their lives.

“So we will look at taking away their passports and driving licences.

“We’re keeping nothing off the table.”

When dealers are arrested, police will be able to seize their mobile phones and use them to send messages to their clients to discourage drug use and direct them to support.

The measure is designed to remove the feeling of anonymity when people purchase illegal drugs by making them aware the police know what is going on.

To emphasise how serious he was about the new war on drugs he joined police in Liverpool for morning raids in the Kirkdale and Anfield areas of the city as part of an investigation into county lines dealing.

It is a city that doesn’t have much sympathy with the PM.

The only problem was he looked as stupid as ever. The sort of thing you might get dressed up in if, I don’t know, you had taken a lot of drugs.

It doesn’t help that most of the toilets in Parliament have cocaine residue in too!

Unsurprisingly, social media took its chance to give Johnson a harsh sentence for his attire.

Here’s a pick of the best responses:

And the best one…

Line of Duty creator wrote: “Thank you for submitting your audition for the next series of #LineofDuty but we’re looking for a character with at least one redeeming moral principle and a performance that places even just a scintilla of doubt in the audience’s mind that he might not be totally bent.”