The mystery object some experts claimed was an alien craft passing Earth has a greyish/red surface and is the size and shape of London’s Gherkin skyscraper, according to latest research. The strange visitor – which has been named ‘Oumuamua – the Hawaiian word for “messenger” or “scout” -has triggered worldwide speculation since it passed close to […] 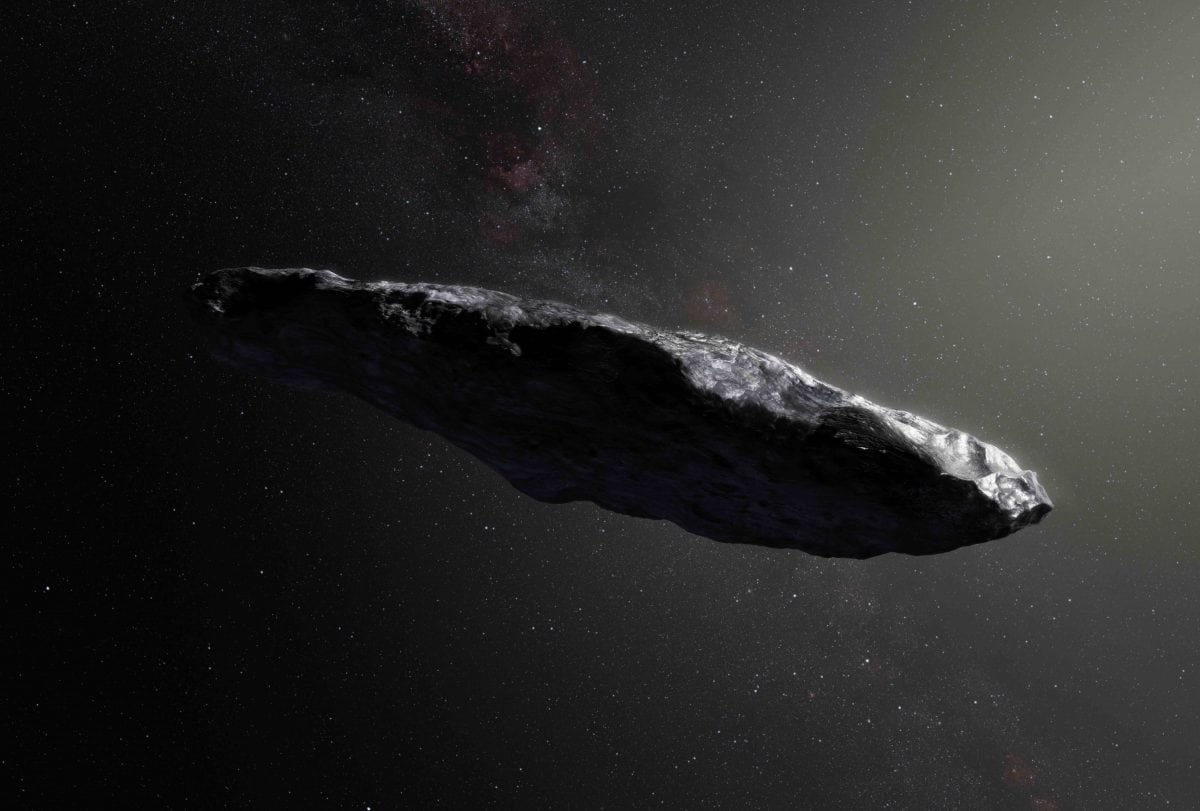 The mystery object some experts claimed was an alien craft passing Earth has a greyish/red surface and is the size and shape of London’s Gherkin skyscraper, according to latest research.

The strange visitor – which has been named ‘Oumuamua – the Hawaiian word for “messenger” or “scout” -has triggered worldwide speculation since it passed close to Earth in October after arriving from deep interstellar space.

Scientists from Queen’s University Belfast led an international team of astronomers – from Britain, the United States, Canada, Taiwan and Chile -tasked with piecing together a profile of ‘Oumuamua.

At first astronomers thought that the object speeding towards Earth was a comet. But unlike a comet, it didn’t leave a trail of gas and dust from an icy coating. So, then they thought it was thought to be an asteroid as they are mainly formed of metal and rock.

But new research, while scotching rumours that the unusually-shaped object is an alien spacecraft, has found evidence of organic matter within it. ‘Oumuamua appears to have a frozen heart, under a shell of carbon-filed gunk.

Professor Alan Fitzsimmons headed a team which measured the way that ‘Oumuamua reflects sunlight, and found it “similar to icy objects covered with a dry crust.”

He said that this was because “Oumuamua has been exposed to cosmic rays for millions, or even billions, of years, creating an insulating organic-rich layer on its surface.”

Prof Fitsimmon said: “Oumuamua’s dry crust could have protected its icy interior from being vapourised – even though the object was just 23 million miles from our sun in September when it zipped past.”

He added: “We have discovered that the surface of ‘Oumuamua is similar to small solar system bodies that are covered in carbon-rich ices, whose structure is modified by exposure to cosmic rays.

“We have also found that a half-metre thick coating of organic-rich material could have protected a water-ice-rich comet-like interior from vapourising when the object was heated by the sun, even though it was heated to over 300 degrees Centigrade.”

The research was published in the journal Nature Astronomy.

Astronomers on the Breakthrough Listen project hunting signs of alien life used the huge Green Bank telescope in West Virginia to monitor ‘Oumuamua for radio signals in case there were signs of intelligence in the object, but none are found.

Meanwhile Dr Michele Bannister, of Queen’s, and her team observed Oumuamua while it was still within reach of the largest telescopes in the world.

Their findings, due to published in Astrophysical Journal Letters, showed the object was the same colour as some of the icy minor planets they had been studying in the outskirts of our solar system.

Dr Bannister said this implies that different planetary systems in our galaxy contain minor planets like our own.

She said: “We’ve discovered that this is a planetesimal with a well-baked crust that looks a lot like the tiniest worlds in the outer regions of our solar system, has a greyish/red surface and is highly elongated, probably about the size and shape of the Gherkin skyscraper in London.

“It’s fascinating that the first interstellar object discovered looks so much like a tiny world from our own home system. This suggests that the way our planets and asteroids formed has a lot of kinship to the systems around other stars.”

She added: “We are continuing our research into ‘Oumuamua and are hopeful that we will make more discoveries in the near future.

“Discoveries like this really help to give a little more insight into what’s out there and encourages people to look up and wonder.”