"I've been going through a bit of a rough patch, and this has made me feel worse on top of that," he said. 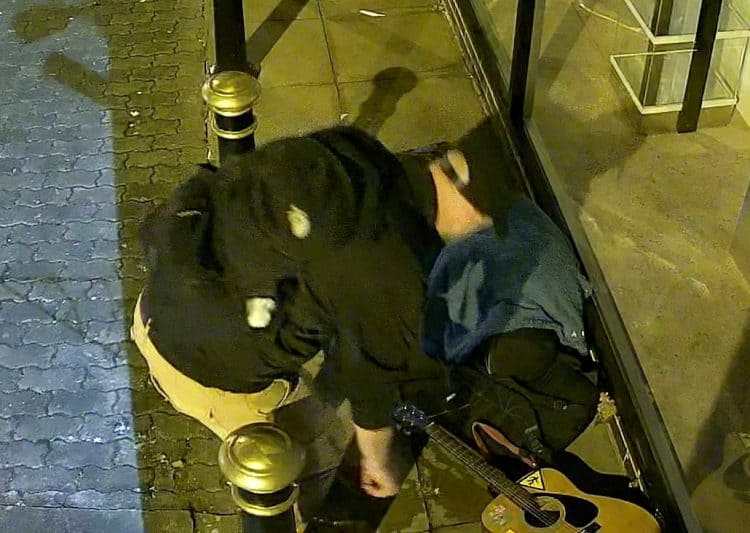 Shocking footage shows the moment a heartless thief callously stole a homeless busker’s GUITAR while he slept in a shop doorway.

The victim, known only as Philip, was fast asleep outside a perfume shop in Malvern Link, Worcs., when the lowlife crook struck at 11pm on Good Friday (16/4).

CCTV cameras captured the man creeping up to Philip while he was wrapped up in blankets before bizarrely stealing the instrument from right next to his head.

Philip, who only recently became homeless, said: “When I woke up, it was gone. I woke up at about half past 11 and the guitar had been taken.

“I’ve been going through a bit of a rough patch, and this has made me feel worse on top of that, but I try not to let things affect me too much.

“I’ve become quite well known performing in the area, so I didn’t expect anyone would do something like that.”

The footage of the brazen theft caused an outpouring of anger from members of the community after being shared on social media.

Many have offered to replace Philip’s stolen acoustic guitar after it was taken from outside Fragrance House in the town centre.

The store posted on Facebook: “Anyone recognise this man? He has tattoos on the back of both legs.

“He thought it was nice to steal the only possession of a homeless man, the guitar he used for busking, on Sunday night at 11.05pm outside Fragrance House in Malvern Link.”

Philip, originally from Cape Town in South Africa, thanked the public for their support and offers of a replacement, but said: “I only really need one decent guitar.

“I don’t want to start stockpiling guitars or anything.

“I’ve already had messages from people offering an electric guitar and amp, which is great, as well as a few offering me acoustic guitars, which are probably more suitable for what I need right now.”

He added he hoped his story would shine a light on the difficulties faced by homeless people, as well as the abuse many on the streets face daily.