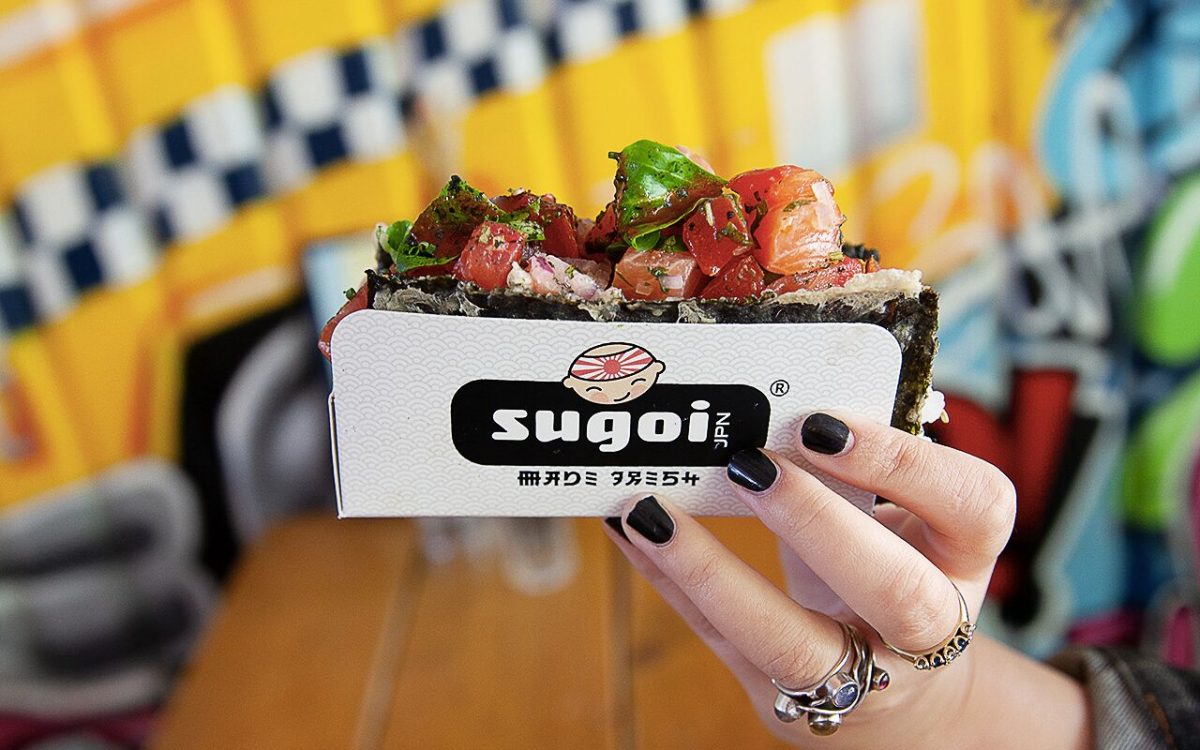 Born from a palpable admiration of Japanese food, Sugoi JPN is a new project from husband and wife team Felipe Preece and Veronica Silva.

“We chose the name very carefully as we were looking for something that represented our passion and respect for the Japanese culture and its discipline, flavours and – at the same time – the happiness and traditions of our Latin American heritage,” explains Venezuelan-born Felipe. “We were keen to make something different, unique, simple, but cool. ‘Sugoi’ is a Japanese superlative and an exclamation linked to the positive admiration of a talent or power. It is used in Japan to describe something that is wonderful or incredible; cool or awesome.”

With a long history of developing Japanese or sushi restaurants worldwide, the pair wanted to produce something different for their new venture. Knowing the London market is already saturated with a great number of Japanese casual restaurants, franchises, takeaways, street food stalls and fine dining establishments, Sugoi prides itself on championing NoriTacos. “We were inspired by Tokyo’s Piss Alley street food market and Latin America’s street food stalls, so we decided to fuse the best of the Latin and Japanese traditions, cultures and flavours to get a new hard-core street food concept, NoriTacos”.

A hybrid between Japanese nori and Mexican tacos, the NoriTaco is a firm seaweed tempura shell packed with rice and various fillings. Alongside the amiable flavour profile, what’s most surprising is the structural integrity that remains while eating each shell, making it possible to take bites without losing any of the filling. An ideal street-food dish that’s easy to eat on the go. The composition also lends well to delivery, which largely contributes to the brand’s custom.

“Everything started back in 1997 when I fell in love at first sight with Veronica in a Sushi bar at Caracas-Venezuela,” Felipe told The London Economic over a soft-shell crab NoriTaco and a dish of superlative yuca fries rife with togarashi. “I was eating there and she was working as a part-time waitress while she was studying graphic design. To impress her, I decided to become a sushi encyclopaedia and visit her every week to show her my “sushi knowledge”, and my strategy worked. Today after 20 years together she is the love of my life, we have a sushi-loving daughter and our life revolves around Japanese gastronomy.”

Sugoi’s inception followed a turbulent chapter in the pair’s story. As well as having advised in different Nihon restaurants around the world, with a solid track record for successful concept development, Felipe and Veronica also founded a number of restaurants including SushiOlé in Madrid, Sushi House and Japo Express in Mallorca, and Oh! Sushi in Miami. In 2012, however, the family lost everything they had in Miami, economically speaking, and Felipe decided to come to London in search of a new opportunity.

“I arrived in August 2015 with £300 and a bag full of my CVs to start again, my fist time looking for a job in years. I left my wife and daughter with an uncle in Chile and I found a room in a hostel in Islington where I shared the room with 12 young guys,” Felipe expounds. Although he generally enjoyed the hostel experience – having gained new friends and much support – Felipe would walk to work and eat 30p noodles every night in order to save money earned working for groups such as Aqua, Hakkasan and SSP. Eventually he earned enough for the deposit on a flat and brought his family to the UK, eventually launching Sugoi JPN.

After renting a dark delivery kitchen under the railway arches in Bethnal Green, to focus on a delivery concept, Sugoi JPN popped-up at their neighbours Renegade London wine and Old Street Brewery before moving into a parked truck in the courtyard of Mother Kelly’s on Paradise Row. “We opened the business but there was no immediate reaction. At the beginning we had a couple of orders a day and the feedback was amazingly positive but two orders a day were not enough, so we had to start using guerrilla marketing to survive. I therefore quit my job to be full-time in the business. We introduced ourselves to our friendly neighbours, one of them was Old Street Brewery.”

Felipe continues, “They did not want to deal with chefs, kitchens, food, menus, and all the back of house problems, so we took care of it for them. That way, they have a kitchen and we have a floor (restaurant with tables). It is a win-win relationship and because we have the same vision, ethos and values, everything flows perfectly. We did the same with Renegade London wine and now with Mother Kelly’s, but here is different as we park a food truck/trailer there.”

As for the food served, Sugoi’s NoriTaco isn’t just another ill-conceived fad pedalling style over substance. Considered fillings include the likes of the ‘Chingón’, which combines sashimi grade tuna and salmon with pico e gallo and a practically perfect riff on sushi rice, complete with sesame seeds. ‘Señor Crab’, on the other hand, features hunks of soft shell crab, lightly battered and plunged into seething oil, simply teamed with sushi rice, coriander, shichmi togarsahi and a drizzle of spicy mayo. One is enough for a snack, two are more than substantial as a main meal, but you’ll struggle to avoid ordering more. An additional side, gyozas are packed with fresh vegetables and steamed before being lashed with a zingy yuzu dressing. Another must-try – and they’re vegan-friendly.

As our chat draws to a close, I have one last question for Felipe. After losing everything in 2012, why choose London for the launch of Sugoi JPN?

“For us there is no other place in the world better than London. It is a fantastic City – I would say the Capital of the world, with a strong economy, stability, it is very multicultural, tolerant, has values, respect, potential. If you do the things properly, work hard, you can make it happen.

“It was not easy but was possible. I guess it’s true what some people say, impossible means I’m-possible. It happened because it is London.”

Further information on Sugoi JPN can be found here.