Launched at the just under a year ago, The Ned heralded the introduction of Soho House’s first suit-friendly venue. Housed within London’s former Midland Bank – a Grade-I listed building designed by Sir Edwin ‘Ned’ Lutyens in 1924 – The Ned is a 252-room hotel and members’ club in the heart of the Square Mile; […] 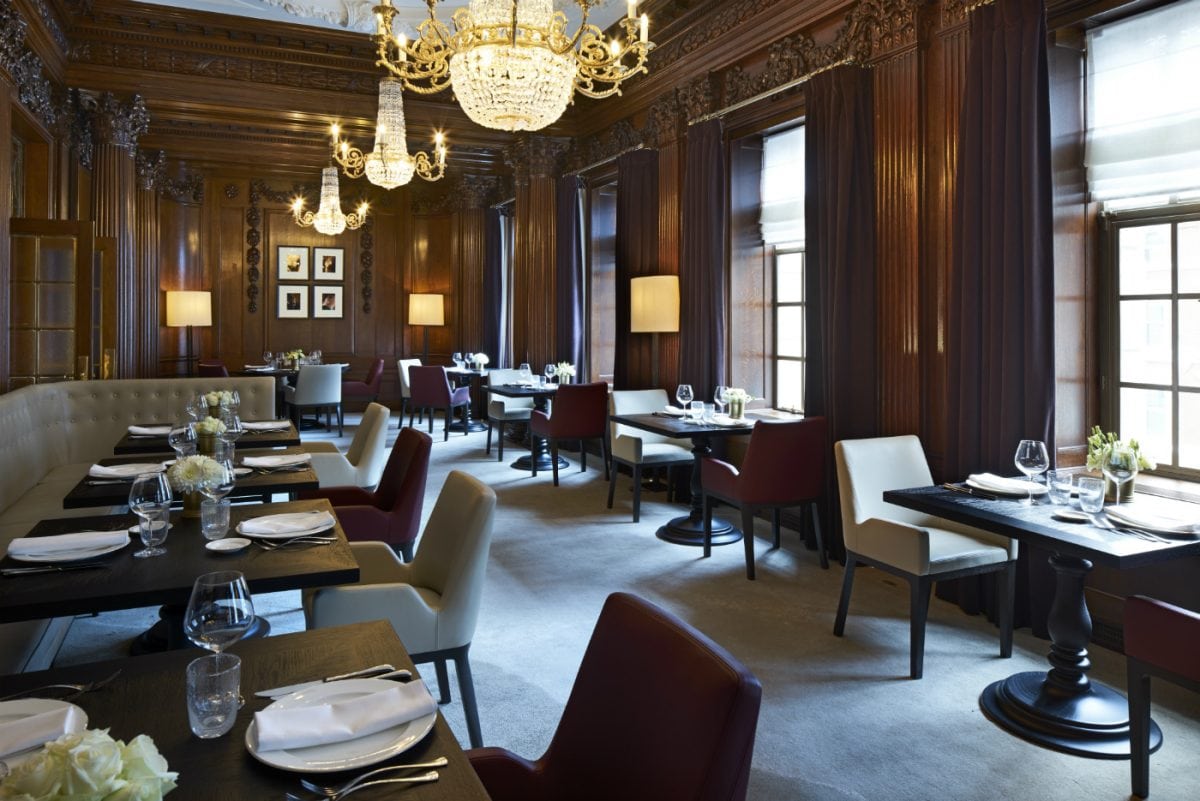 Launched at the just under a year ago, The Ned heralded the introduction of Soho House’s first suit-friendly venue. Housed within London’s former Midland Bank – a Grade-I listed building designed by Sir Edwin ‘Ned’ Lutyens in 1924 – The Ned is a 252-room hotel and members’ club in the heart of the Square Mile; fusing Shoreditch cool with Mayfair stateliness. With eight restaurants, an Instagram-friendly lap pool on the roof and a private, members only vault room, The Ned’s opening was shrouded with rapturous hysteria – plugged by just about ever social media influencer within a 250-mile radius.

Another hybrid hotel and members’ club, Four Seasons Ten Trinity Square also opened in 2017. Taking over a Grade-II listed building across the road from the Tower of London, the hotel’s location was once used as the headquarters of the Port of London Authority, later repurposed as an insurance company office space, then left derelict throughout the 1990s. Here, the opening of La Dame de Pic – French three Michelin starred chef Anne-Sophie Pic’s first London restaurant – was incremental in putting the hotel on the map of hedonistic Londoners. Soon after opening, the restaurant was also awarded a Michelin star.

Upstairs, The Club at Ten Trinity Square is a far-cry from traditional members’ clubs. Gone are the pompous tones of upper class inimitability, open solely to men (like so many members’ clubs still operating in London). Instead, Ten Trinity Square is a comfortable space, slightly disconnected from the rambunctiousness of the city. A collaboration between Four Seasons, Château Latour and the Reignwood Group, Ten Trinity Square is managed by Nigel Stowe (The Ivy Club, The Arts Club, Café Royal) and offers a fair range of members’ benefits. In addition to a members’ bar, library and billiards room, the club is also home to an indoor cigar shop and lounge, with Paola Paolillo, the UK’s only female Master of Havana cigars, on hand to offer expert guidance and pairings. Members are also able to join the hotel’s luxurious spa, with an indoor swimming pool, vitality pool, sauna, hammam and fitness centre.

Most compelling of these amenities, however, are the Château Latour Discovery Room and Château Latour Dining Room. Both of these mark the first time the eminent first growth estate from Pauillac has lent its name away from the vineyards. Thus the estate’s first collaboration of this type outside of France. Throughout the club, the interiors have been designed by Bruno Moinard, who also redesigned Latour for its 2014 reopening. Here, a sense of continuity from the project is present, shaped around the building’s original boardrooms and executive offices. Opulent patrician dark-wood panelling is joined by leather furniture with a palate of taupes, golds and burgundies. In contrast, the space is bedecked with plenty of vivid modern art, opulent chandeliers, and light soft furnishings which complement the natural light that floods each room during the day.

Designed to subtly replicate the Château Latour tasting room in France, Ten Trinity Square’s ‘The Discovery Room’ features bronzed lighting and wine cellars filled with some of Château Latour’s most sought-after vintages. Members are able to enjoy and purchase these wines, plus a selection of other wines from the cellars of Château Latour and Artémis Domaines estates. Guests are also able to enjoy glasses or flights of Latour wine, boasting a large array of vintages dating back to 1939. Elsewhere, the wine list favours traditional French regions. While the selection of typically affordable wines is low, the big hitters don’t suffer from offensively outrageous mark ups. House Champagne (Maison Delamotte) costs £12.50 per glass.

The Château Latour Dining Room, on the other hand, offers a menu prepared by Anne-Sophie Pic and her team, influenced by Pic family recipes. While the menu downstairs at La Dame de Pic is placated with numerous modern flourishes, upstairs is more deeply rooted in traditional French cuisine – the type Pic grew up with. Here, the menu has been specifically designed to complement wine pairings from award-winning Sommelier Jan Konetzki (formerly Head Sommelier at Restaurant Gordon Ramsay).

We begin with a round of freshly-baked bread and Anne-Sophie Pic’s opinion dividing butter flecked with coffee, washed down with two glasses of the house Champagne. This is followed by Mosaïque de Rouget; an expertly executed slab of red mullet and foie gras terrine coated with chopped parsley. On the side, bouillabaisse jelly is subtle, topped with some hazelnuts which bring pleasing depth of texture. Across the table, a salad of lobster is breathtakingly pretty. Centred around a tower of lobster and paper-thin celeriac ribbons, topped with basil, the plate is decorated with intersecting blobs of red, yellow and green sauce.

Another lobster dish features the tail and a claw of roasted Scottish lobster. This lounges on a mattress of al dente chestnut tagliolini and Homardine sauce richer than Kevin Systrom. The pithivier of pigeon and foie gras, on the other hand, is one of the best, most fulfilling things I’ve ever had the pleasure of eating. Life changing, even. This dome of pastry is served at the table already sliced, showcasing the layers of superlatively pink pigeon breast, some spinach, which acts as a bolster to prevent the golden brown pastry from becoming soggy and the ubiquitous decadence of the foie gras. This is dressed with a cocoa bean sauce and served with a large glass of Chante Coucou 1999, which tastes almost as though deliberately crafted to pair with this dish, 19 years later. This is Death Row food and drink at its absolute best.

To finish, a chocolate and cherry dessert is decorated with cocoa powder to evoke bare branches, while choux pastry spheres are spliced and filled with a luxurious coffee praline. Be sure to also take advantage of the opportunity to finish the meal with a cup of suitably luxurious Difference Coffee. Granted, Anne-Sophie Pic’s food served in the Château Latour Dining Room isn’t as euphorically exciting as it is at La Dame de Pic, but the execution is outstanding: the sort of decadent, unsterile fine dining that’s exceptionally paired with this lavish new pleasure palace.