Having been closed for over a year, Above at HIDE continues to serve its experiential tasting menus championing exceptional produce. 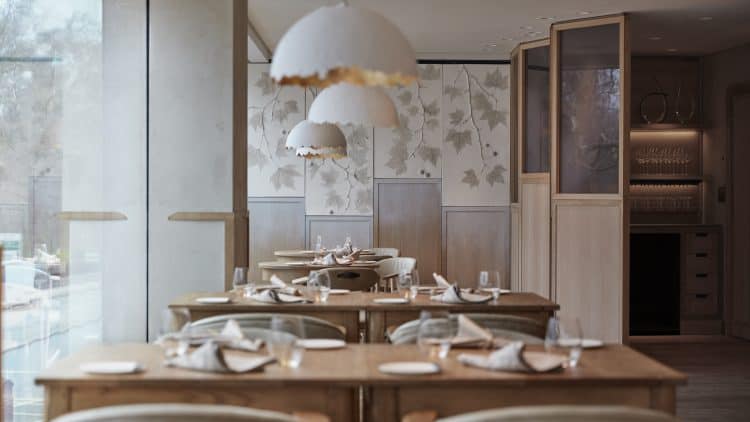 Having successfully pivoted to offer an at home offering during various stages of lockdown, HIDE has fully re-opened the doors to its basement bar and two dining areas: HIDE (formerly known as Ground) and Above at Hide.

“Very simply, these are two distinct and different restaurants: from the menus and opening times to the kitchens and teams that operate them,” says chef Ollie Dabbous. “Re-opening is the perfect opportunity to remind the public, restaurant guides and media of this.”

First opened in April 2018, the venue is a project from Hedonism Wines and Ollie Dabbous, following the unexpected closure of the chef’s Dabbous in Fitzrovia, one of London’s best restaurants at the time. At HIDE, Dabbous’ cooking style is very much reflected in the dishes and drinks served throughout, with the chef seemingly given far greater freedom to run with his ideas, with the upstairs restaurant representing the best expression of the chef’s modern, seasonally-led cooking. Having remained closed since last March, Roux Scholar Martin Carabott has been brought in as Head Chef at Above at HIDE, showcasing the restaurant’s signature style.

Accessed via the restaurant’s now famous spiral staircase connecting all three distinct venues, Above at HIDE showcases both fine dining and equally polished service, but without being stuffy or uncomfortable. When it comes to the food selection, this is very much a tasting menu restaurant. An a la carte menu is available, but it seems superfluous when main courses are priced from around £40-£120. The set lunch menu is also excellent, offering three courses for £48 per-person (plus canapes, bread, and petit fours).

As for the eight and five-course tasting menus, both are available with a selection of different wine pairings, while a huge range of wines can also be ordered direct from nearby Hedonism  cellars, with some bottles dating back to the 18th century. While tasting menus are generally a superfluous exercise in self-importance, served for no reason other than to gently caress the chef’s ego – that’s not the case with Above by HIDE. Sure, not every dish is a hit, but the overall experience is both gratifying and impressive. Although expensive, the food is mostly remarkable and executed with striking attention to detail, while the sense of occasion is also very welcome following almost 15 months in and out of lockdown.

From the eight-course tasting menu, a recent dinner began with canapes including a bowl of deeply umami mushroom broth to excite the palate, gem lettuce wedges picked from Crate to Plate that morning, and rich, salty cured pork alongside a sliver of cured goose with the richness of lardo but greater flavour. It should also go without saying that the Above at HIDE bread basket is very, very good, containing various different breads baked in house each day.

A celebration of figs followed, with a warm Bourjasotte Noire fig served alongside a fig puree and fig leaf granita: a clean, inviting dish that, although wasn’t a particular standout, demonstrated plenty of skill and finesse. Far better was a dish of ripe tomato served in a pool of olive oil, peeled, hollowed-out and stuffed with a mixture of Stracciatella, basil, and black olive. Seemingly simple on the surface, it’s a categoric example of Ollie Dabbous’ style, with exceptional ingredients at the fore. The same can be said for the ‘nest egg’ dish that’s been on the menu since day one. An adaptation of a similar dish served at Dabbous, the coddled egg yolk was fortified with mushrooms and served in the shell, on a bed of hay, ultimately providing a rich, deeply comforting cream of deeply savoury egg and mushroom with a whisper of smokiness.

Although fine, the foie gras dish over promised and underdelivered. Gently cooked in a Moscatel broth, the foie gras was technically cooked perfectly, but failed to live up to the outstanding broth and accompanying summer corn and beans which brought a little texture to the dish but not enough to contrast the slightly challenging texture of the poached liver, whose place seemed unwarranted.

Another delicious broth featured with a tranche of steamed day-boat turbot which lulled in a warm nasturtium broth, which was one of the menu’s fish course choices. Although excellent, the other choice of Cornish lobster dumpling was the more exciting option, wrapped with daintily thin pasta, bathing in a thin pea velouté. But perhaps best of all, a chop of suckling pig from Huntsham Farm was served pink (as it should be) alongside spring turnip and a puck of creamy black pudding. For a supplement of £18, a wedge of A5 wagyu was also available, capped with truffle shavings and joined by sparassis.

Before the grand finale, an absolutely inspired avocado leaf ice cream worked as a gorgeous palate cleanser, followed by the dramatic serving of an ‘iced bouquet’, featuring a fulfilling platter of edible flowers plunged into liquid nitrogen to immediately freeze them, like texturally opulent sorbet: another case of Above by HIDE taking already excellent produce and showcasing it even further using innovative techniques and masterful attention to detail.