British food is having a moment. As Londoners continue to embark on punishing quests for the new and exciting, promises of classic British comfort food have become something of a comfort blanket for so many of us. James Durrant’s The Game Bird opened within The Stafford Hotel last year and quickly garnered praise for its […] 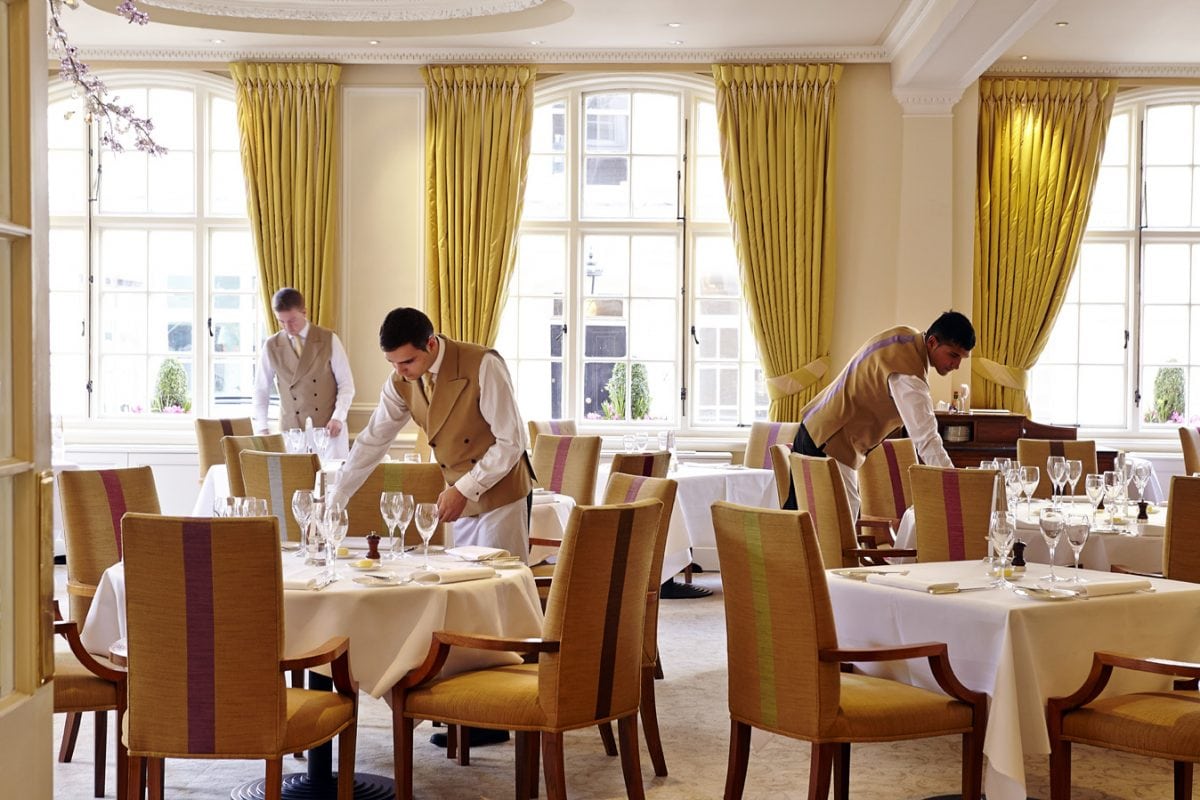 The Dining Room at The Goring

British food is having a moment. As Londoners continue to embark on punishing quests for the new and exciting, promises of classic British comfort food have become something of a comfort blanket for so many of us.

James Durrant’s The Game Bird opened within The Stafford Hotel last year and quickly garnered praise for its archetypal menu of refined comfort food; boasting the likes of steak and ale steamed suet pudding, whole dover sole and at least one type of game bird – year-round. Rules has also successfully championed classic British cooking since opening in 1798, followed by the likes of Bentley’s, St. JOHN and newer restaurants such as Lyles or Rabbit.

A stone’s throw from Buckingham Palace; The Goring Hotel is another British institution. Built in 1910 by Otto Goring, the hotel has since remained family-run, enjoying a long association with the Royal family. The Duchess of Cambridge stayed here on the night before her wedding to Prince William, while the Queen’s mother was a regular guest, particularly fond of the restaurant’s Eggs Drumkilbo.

In 2013, The Goring was granted a Royal Warrant for hospitality services and appointed a new Head Chef, Shay Cooper, to oversee The Dining Room at The Goring. Three years later, in 2016, the restaurant gained a Michelin star. The Michelin Guide describes The Goring as “a model of British style and understatement and its ground floor dining room the epitome of grace and decorum.” On Chef Shay Cooper’s cooking, the entry continues: “All dishes are prepared with equal care and equally superb ingredients, and the skilful kitchen displays an impressive understanding of balance, flavour and texture.” High praise, indeed.

The Dining Room at The Goring is a welcome glimmer into the past – like The Ritz or 45 Jermyn Street, but less supercilious: a portrait of yesteryear highlighting British elegance to be proud of: before plant-based ‘bleeding burgers’, ‘resident’ restaurant DJs, Love Island. During an early Spring lunch, the large dining room is flooded with natural light, decorated with nods to the Edwardian era with a palate of cream and gold, opulent crystal chandeliers and tables embellished with starched linen and polished silverware. Surprisingly, though, the restaurant is without that air of asphyxiating stuffiness typically associated with hotel restaurants of this ilk. Service is naturally polished but floor staff are incongruously human – attentive yet discreet.

Chef Shay Cooper’s cooking here is rooted in staunch classic technique but offers some mild flourishes of modernity. At lunch, a set menu (three courses for £52) features a fair selection of dishes, plus a dish of the day and some supplementary extravagances. To accompany, the wine list is substantial – somewhat overwhelming, even – though a very competent team of sommeliers are on hand to suggest expert pairings.

Lunch begins with the famous Eggs Drumkilbo, dragged kicking and screaming into the 21st Century. A dish whose origins lie within a hotchpotch of ingredients thrown together for unexpected guests at Lord Elphinstone’s stately home in Drumkilbo, Scotland, Eggs Drumkilbo typically features diced lobster, tomatoes, hardboiled egg yolks and gelatine. The Goring’s interpretation features a salad of sweet crab meat with tomatoes and a whisper of Tabasco, embellished with slivers of radish (the ‘it’ vegetable of 2018), a glorious soft boiled quail’s egg and a decadent, somewhat overcooked, lobster tail finished with a gobbet of caviar. On the side, a shard of crostini adds depth of flavour to the dish, disguising the unpleasant texture of gelatine with crab and eggs. Across the table, a tartare of cured sea bream is extraordinarily light, elegant with refreshing hunks of cucumber and fronds of dill.

Wednesday’s regularly recurring dish is a steak and kidney pudding, served from a trolley. Ribbons of shredded beef and soft kidneys (providentially free from their typical uric flavour) are cosseted by a dome of suet pastry that’s thick, lardy and lashed with thick gravy: tasting like exceptional dumplings, thus compensating for the filling’s lack of sauce. This is served with lentils and silky mashed potato. A tranche of Scottish halibut, on the other hand, benefits from some technically perfect cooking, paired with a glass of Corse-Porte Vecchio from Corsica. This is served on a bed of wilted chard and capped with a razor clam shell acting as a perch for sautéed squid, clams and hunks of prawn. The convoying seafood bisque is flavoursome yet wishy-washy in texture, while a dish of fennel-spiked potato puree is a taste revelation, overlooking the lurid Lamborghini green complexion.

To finish, the restaurant’s Marigold apple dessert resembles a deconstructed apple crumble, but is neither pompous nor underwhelming. A celebration of the fruit includes paper-thin slices of dehydrated apple, offset with a glossy apple sorbet, a suggestion of granola crunch and lashings of buttermilk custard. Vanilla rice pudding, on the other hand, is a strong contender for the best iteration of this dish available in London at the moment. The rice has the texture of risotto and is crowned with more caramelised rice – like Rice Krispies – and poached rhubarb. Ambrosia, this is not.

A welcome exercise in nostalgia, lunch here is almost entirely without neophilia. Yes, the city is filled with so many restaurants better suited to generating outbursts of dizzying excitement –  but with eating well as the ultimate goal, it’s difficult to go wrong with The Dining Room at The Goring.

The Dining Room at The Goring can be found at 15 Beeston Place, London, SW1W 0JW.