Imagine if Burger & Lobster were only to sell their overpriced burgers, if MEATliquor actually specialised in eco-conscious vegan treats, or if Le Gavroche were run by a Roman chef with a penchant for German brasserie classics. No, you shouldn’t judge a book by its cover, but in terms of indication, the importance of restaurant […] 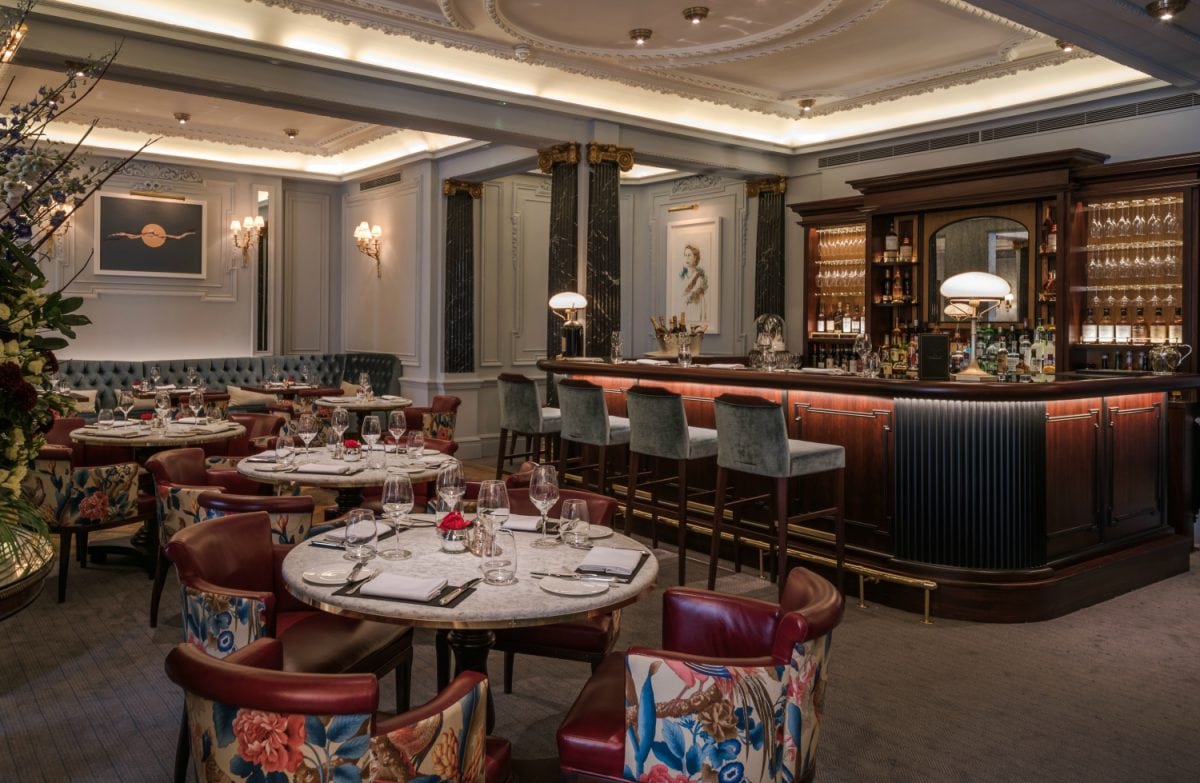 The Game Bird at The Stafford

Imagine if Burger & Lobster were only to sell their overpriced burgers, if MEATliquor actually specialised in eco-conscious vegan treats, or if Le Gavroche were run by a Roman chef with a penchant for German brasserie classics. No, you shouldn’t judge a book by its cover, but in terms of indication, the importance of restaurant names should never be overlooked.

Just opened within the newly refurbished space at The Stafford hotel in St James, The Game Bird is as quintessentially British as the name may suggest; but at the time of writing, only two of over 20 dishes have any association with game. As well as the menu from Chef James Durrant, the interior transformation that’s taken place is most astonishing. While the bar remains the restaurant’s centre-piece, gone are the stuffy tones of bottle green and beige, replaced with an orgy of flamboyant (albeit tasteful) peacock upholstery, light marbled tabletops, elegant serving trolleys and cabinets that display the produce cooked downstairs.

As for the food, the menu pays homage to classic British food, prepared with a flair of modernity. Soon after we take our seats, a trolley boasting a range of smoked fish glides by and becomes completely irresistible. From the trolley, Dutch smoked eel is remarkable with the accompanying blend of fresh horseradish allayed by crème fraiche, classic smoked salmon sourced from H Forman & Son in East London is expectedly delicious, while salmon smoked over oak with The Balvenie whisky comes with a vintage perfume bottle of whisky, spritzed onto the fish for an extra touch of theatre. It is with every last ounce of might that I resist reaching across and dousing myself with the remaining dregs of Scotch.

Fallow deer tartare (£14) is the only game starter available this evening. The dish arrives on the middle of a large plate, prettily arranged as if designed especially for Instagram. Finely chopped dice of raw deer are pressed into a disc with capers, Worcester sauce, Tabasco and a bitter charcoal mayonnaise. On top, rings of pickled shallot are joined by paper thin shards of toasted bread and meticulously placed nasturtium leaves. The flavour of the deer, alone, is magnificent, though the blend of sauces manages to overpower what should be the jewel in the crown of this dish. If anything, the only way to restore harmony is with an extra lashing of Tabasco, with a miniature bottle available on the side.

The main event – ‘The Game Bird’ (£38) – is a glorious wood pigeon that’s presented, fully-plumed, within a display cabinet at one end of the dining room. Four slivers of breast are served pink, but more medium than medium-rare (as ordered), joined by a handful of blackberries, roasted parsnips and some wilted cabbage draped across the top of the plate to bring some greenery. Here, the balance of flavour between the ‘gamey’ pigeon, sharp blackberries and sweet parsnips is well-judged, though it’s the side plate, like an additional extra, that’s absolutely outstanding. Both legs are stuffed with the bird’s offal, slowly roasted and doused with ‘Bull Shot’ – a concoction of beef consommé and vodka. The result is an absolute delight, and the fact that every morsel of meat is used only makes the dish taste even better.

In addition to The Game Bird, the most striking dish on the menu is a Norfolk Black chicken Kiev (£29). As a matter of fact, this is the first chicken Kiev I’ve spotted on a high-end restaurant menu since 1978 – 15 years before I was born. Since then, the classic Eastern European dish, although demonstrating a fair level of skill, has been relegated to the league of pompous home chefs that still manage to serve dry chicken breasts on ‘Come Dine With Me’. With the chicken Kiev, I’m presented with a leather apron that looks like something men are encouraged to wear on radioactive sights, in order to avoid sterility. Instead, I’m told, it’s to protect my shirt from an explosion of butter. Expecting a Vesuvius eruption of molten dairy fat, the sauce escapes in a manner far closer to that of puss seeping from a septic insect bite. Thankfully, the chicken breast is cooked well and hasn’t dried in the oven, meanwhile the breadcrumb coating is elevated with the secret addition of some ground chicken skin to add depth of texture, as well as coaxing as much flavour from the meat as possible. What’s more, the under-appreciated dinner party classic is, here, stuffed with decadent butter so rich with truffle, it wouldn’t seem unreasonable to expect this take on the dish to make an unexpected return to glory in the near future.

Finally, a classic pistachio soufflé (£9) is well-risen and tastes completely of pistachio, without any stagnant taste of egg white. A treasure trove of cheese, nonetheless, is another artefact to pass us by throughout the meal and lead to inquisitive ordering. The selection of cheese that’s inside is small, but highlights a number of occasionally unexpected British and French suppliers: a must-try (£12 for 3, £18 for 5). By the time that game season is completely underway – The Game Bird shall, hopefully, make the most of its namesake and offer some more game-focussed dishes. For now, however, James Durrant’s cooking manages to fly the flag for the food of Britain, proving that our national cuisine needn’t be unexciting, divergent to popular belief.


Tags: The Game Bird at The Stafford
Please login to join discussion