Classic British cooking is having a moment. For every ill-contrived Modern-British foam, ‘essence’ or poncey restaurant ‘concept’, there’s a smoked fish trolley, tableside flambé station, or dedicated ‘pie room’ commanding respect in some sprauncy corner of central London. And so they should. British food has a dreadful reputation, at best, but when overlooking bland roast […] 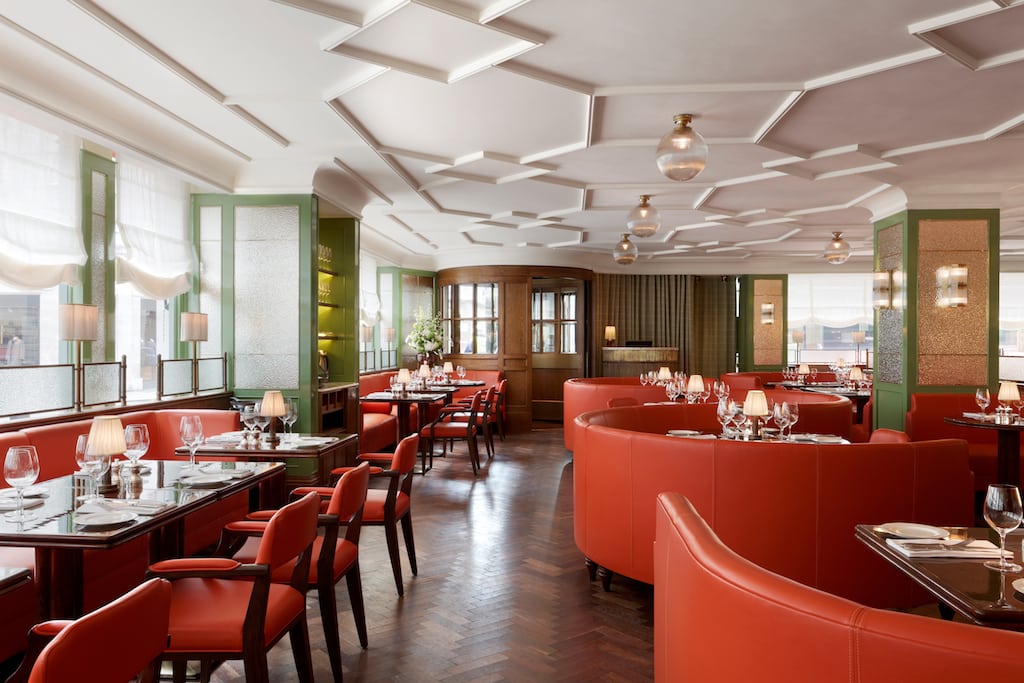 Classic British cooking is having a moment. For every ill-contrived Modern-British foam, ‘essence’ or poncey restaurant ‘concept’, there’s a smoked fish trolley, tableside flambé station, or dedicated ‘pie room’ commanding respect in some sprauncy corner of central London. And so they should.

British food has a dreadful reputation, at best, but when overlooking bland roast dinners and the unspeakable things our grandparents did with offal, there’s something endearing about the undiluted glamour that engulfs restaurants such as Scott’s, Bentley’s, relative newcomer The Gamebird at The Stafford, and 45 Jermyn St. On the corner of Duke Street and Jermyn Street (number 45, obviously), behind Fortnum & Mason, the restaurant opened at the end of 2015, but epitomises the glamour of yesteryear. With its sympathetic lighting from art deco lamps, pistachio-green woodwork, lacquered parquet flooring and charming, unfussy service to match – it’s all a bit Great Gatsby (a good thing, surely). Here, even the shade of burnt orange leather, most ungodly of pigments, feels glamorous; stylish, in fact.

Along the back of the room, a ritzy cocktail bar serves classic and signature cocktails. It’s the sort of place where the modern-day dandies of St. James might ask for their dry Martini to be stirred, even just once, if only for a laugh. You could do far worse than ordering the Negroni Inglese or one of the ‘Rickies’ (the Cognac, cherry and orange variant concoction is particularly rousing). For dinner, we sit at a corner table capacious enough to host the Last Supper. Alongside the all-encompassing a la carte menu, there’s a constantly evolving section which showcases seasonal ingredients. White truffle season, no less, arrives with a selection of tremendously indulgent treats.

Of such, ribbons of al dente Tagliatelle are cooked to retain some typical Italian bite, lashed with liquified Parmesan that’s aged for 24 months and festooned with shavings of white truffle (sourced from Northern Italy) at the table. A simple dish, like all the best Italian cooking, the cheese is so insalubrious I can feel the decades dwindling from my natural lifespan with each mouthful, but it’s worth every bite. The most outrageous toasted cheese sandwich in London, at the moment, features sourdough spread with truffle-spiked butter, melted Raclette, and is topped with even more fresh white truffle. Again, the dish is uncompromisingly decadent, but it’s everything you’d expect when paying £26.50 for a cheese toastie.

From the main menu, tacos filled with raw Cornish mackerel, more of a ceviche than tartare, are less Old El Paso than the crunch suggests. The fish’s inherent oiliness is slightly overwhelmed by a lactic presence, but the tortilla crunch brings welcome textural contrast, as do pinches of caviar that crown the tacos and burst on the tongue. Mains encompass various classics (Dover Sole, Fisherman’s pie, loin of venison) but the beef Wellington is completely irresistible. Prepared at the table, the parcel of brittle puff pastry ensnares a generous wedge of fillet, well-seasoned and cooked medium-rare. This is bolstered with gloriously earthy duxelle of mushroom and cream that absorbs the beef’s blood, preventing the pastry’s bottom from becoming flaccid and unpalatable. Convoying peppercorn sauce is theatrically flambéed tableside (of course it is), with almost enough Cognac for me to lament the loss of my eyebrows, and has appreciated fervour.

To finish, various ice cream floats (with or without alcohol) are on offer, as are a wide number of classics: Knickerbocker Glory, rice pudding, crème caramel, Baked Alaska. Also flambéed tableside as one last encore, the Baked Alaska has soft Italian meringue, Griottine cherries, still-intact ice cream and plenty of Kirsch. It’s fine, but the baked apple soufflé is the jewel in the crown of this “afters” menu. Well-risen and rife with the taste of apple (juxtaposed to the more typical pang of egg whites) the soufflé is complete with oat crumble to evoke apple crumble – most glorious of autumnal British desserts – and a quenelle of cinnamon ice cream, on the side, is absolutely inspired. Suitably opulent, 45 Jermyn St. offers enjoyable salvation from the 21st century and its many ills. Dinner is by no means cheap, but this quintessentially British statement dining comes with a true sense of occasion.