It would be far too easy to sneer, mock and feel a little exasperated by its saccharine sweet narrative, but Bill Holderman’s new romantic comedy Book Club remains one of the most groundbreaking films of its genre, regardless of how contrived or predictable it might seem to some. Staring Jane Fonda, Diane Keaton, Candice Bergen […] 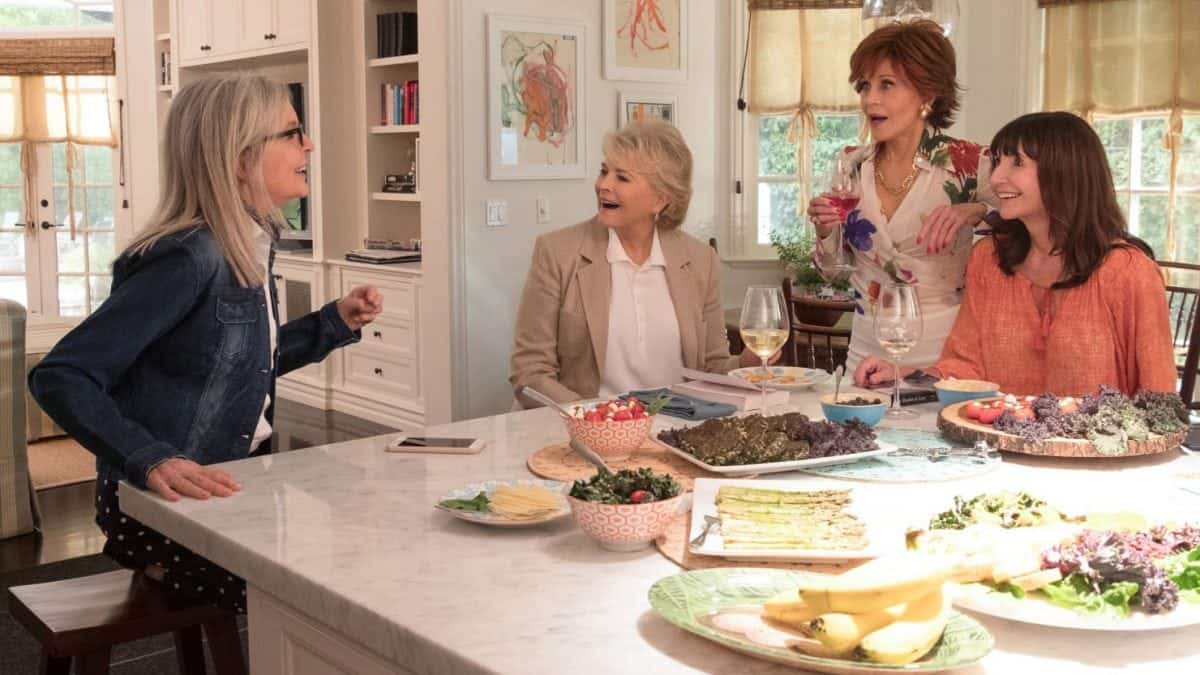 It would be far too easy to sneer, mock and feel a little exasperated by its saccharine sweet narrative, but Bill Holderman’s new romantic comedy Book Club remains one of the most groundbreaking films of its genre, regardless of how contrived or predictable it might seem to some.

Staring Jane Fonda, Diane Keaton, Candice Bergen and Mary Steenburgen as members of a book club who find a new lease of life thanks to the introduction some unlikely new reading material, the film might not present the most earth-shattering premise or even the most coherent narrative, but the fact that it stars 4 women over 60 in romantic roles, is what makes it truly revolutionary, especially in an industry where women have struggled for decades to remain relevant after 40.

After years of meeting every week to discuss books and enjoy each others company, recently widowed Diane (Diane Keaton), independent hotel owner Vivian (Jane Fonda), happily married Chef Carol (Mary Steenburgen) and divorced judge Sharon (Candice Bergen) see their world turned upside down when Carol introduces them to the E.L James’ Fifty Shades of Grey trilogy, albeit almost a decade after the rest of the world.

Things take a turn for the unexpected when Diane, who is being cajoled by her grown daughters to move to Arizona to be closer to them, meets a handsome stranger who shows her that her best years are yet to come. For Vivian, meeting an old flame (played by the much younger Don Johnson) after years apart, was all it took to reignite a feeling she had long forgotten, while Carol is forced to rethink her happy marriage when her husband Bruce (Craig T. Nelson) refuses to keep up with her reinvigorated libido. Which leaves Sharon, who after years of being divorced, is shocked to find out that her ex husband is dating a woman young enough to be his daughter.

Director Bill Holderman, who co-wrote the script with actress turned screenwriter Erin Simms, offers a rather contrived and silly story that while being fully aware of its demographic, presents very little substance in the story-telling stakes. Having said that, there is more than enough here to please the demographic the film is aimed at. The dialogue, which is peppered with some surprisingly risqué gags, will keep you chuckling away for duration, even if some of the gags fall rather flat.

All said and done, what makes Book Club so unique falls back onto its eternally bankable cast. Keaton oozes class and likability, and I would defy anyone not to be charmed by her very Keaton-esque antics and left-field dress sense, which are reminiscent of her early acting days. For her part, Fonda puts in a decent, if a little robotic, turn as man-eating Vivian, while the rest of the cast provide exactly what is expected of them without too much trouble. On the whole, a respectable, if not totally convincing production which could have definitely benefited from a more original premise.