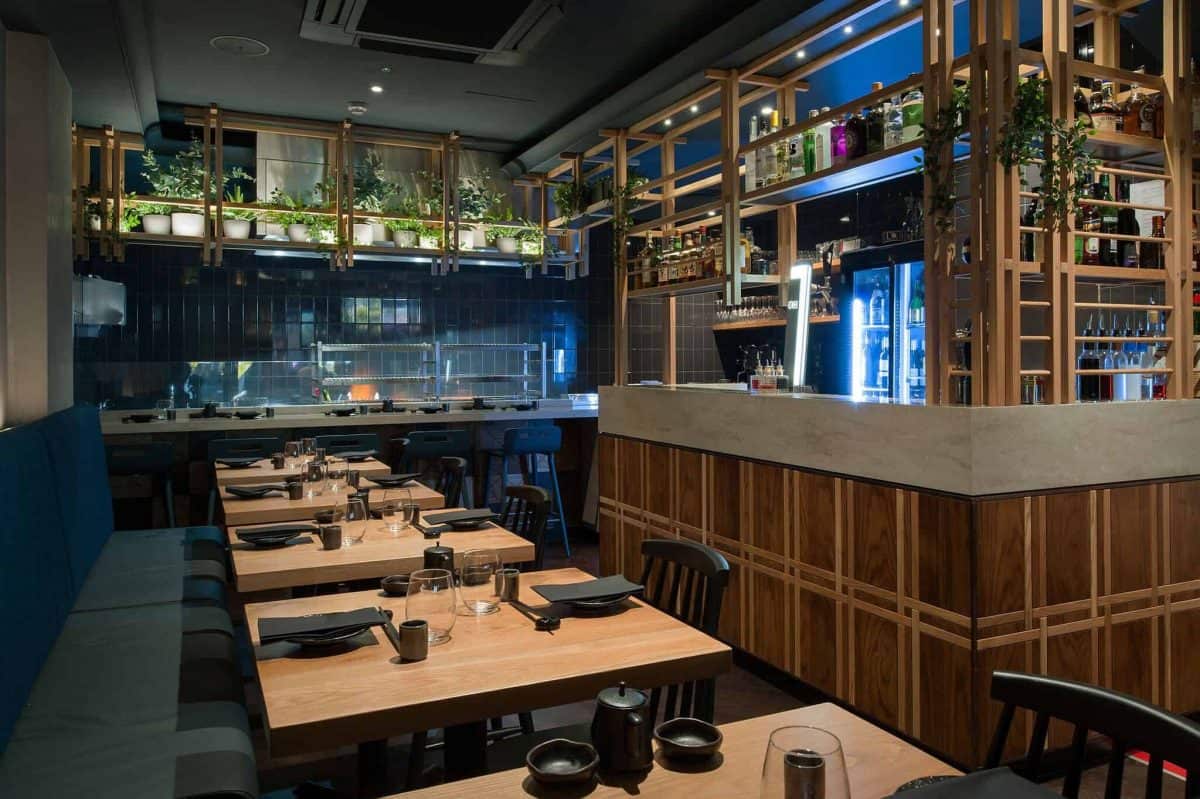 Meaning ‘hearth’ or ‘fireside’, robata is a strand of Japanese cooking over robatayaki charcoal grills. A tradition first introduced by ancient fishermen off the island of Hokkaido, who’d cook their catch over hot coals concealed in small stone boxes, the concept quickly made its way to the land, with a significant boom in robata restaurants opening in Japan after the Second World War. Tens of thousands now operate across the country, with many having been introduced to international cities.

In London, for instance, robata grills have become exponentially popular in restaurant kitchens (also in exceptional non-Japanese restaurants such as Coal Rooms and Flank). Occupying the former site of Tuk Tuk Noodle Bar on Old Compton Street, Robata is the latest opening to champion the ancient cooking style. Quietly opened earlier this year, Robata is an izakaya-style restaurant from entrepreneur Sonny Huang, whose operates two Chinese restaurants in Birmingham.

Literally meaning “sitting in a sake shop”, izakayas have also become popular in London, primarily showcasing the fact that Japanese food isn’t exclusively rooted in rice and raw fish. Often likened to a Japanese pub, izakaya restaurants are traditionally casual affairs, designed for Japanese salary men to enjoy an informal selection of small dishes washed down with beer or sake after a long day at work. Fittingly, Robata’s atmosphere is particularly informal, with the space designed by turnerbates Design & Architecture. Cool dark tones are joined by paler wooden furniture, with bench seating or bar stools at the counter, where guests can watch the chefs cook in the open kitchen. On entering, a neon sign reads: “You were my cup of tea, but I drink sake now”.

The space is relatively rowdy, in a refreshing sense, while service is notably friendly, if not a little over-familiar. In fact, the service is generally unstable, unable to strike a balance between omnipresence and non-existent, with long waits between ordering drinks and confusion leading to dishes appearing twice on the bill during a recent dinner. Accidents happen and this could have been a one-off mistake; just be sure to check the bill’s accuracy before paying.

As for the food, Robata’s menu is rooted in Japanese comfort food, much of which is cooked over charcoal on the robatayaki, joined by some Pan-Asian influences. Prices are at the premium end of the scale and it’s easy to get excited while ordering, ultimately resulting in an expensive bill. Fixed-price lunch and pre-theatre menus provide less of a selection but boast good value, on the other hand (£18.50 and £22.50 for five items. The pre-theatre menu also includes a glass of wine). The drinks list here has also been carefully considered, with sake featuring in a number of contemporary cocktails. The house Ozeki Junmai also starts at £4.50 per glass, with a carafe reasonably priced at £13.50. A must-try.

As is the case with so many restaurants offering a sharing concept of small plates, dishes are brought to the table as soon as they’re ready and thus arrive in a strange order. A recent dinner began with a round of Taiwanese gua bao filled with Japanese fried chicken (£12): a succulent thigh was deftly fried, loaded with mayonnaise, Korean kimchi, black sesame seeds and spring onion. The filling compensated for the stodgy bao bun with texture more akin to a bagel. More kimchi featured in a gyoza stuffed with the fermented cabbage mixture, steamed and finished in a hot frying pan (£7.50). Pork gyoza (£8) were the better option, nonetheless. Prepared in the same manner, the dumplings were aided by a healthy amount of shiitake mushroom and water chestnut alongside the unctuous pork mince.

From the robata, a skewer threaded with a thin slab of pork belly (£4) was cloaked with a vivid orange sauce, tasting not too dissimilar to the famous McDonald’s McRib – which isn’t necessarily a bad thing. The scallop variant, on the other hand, was fine but seemed excessively expensive at £9.80, even when taking scallops’ high cost price into consideration. The restaurant’s signature wood-flamed Iberico pork pluma (a cut from the pig’s shoulder) was served with sweet pickled nashi pear (£23.50). Seasoned with a blizzard of black pepper, the pork was cooked remarkably – medium rare, as Iberico pork should be served – and boasted a symphony of bold, complementary flavours: pepper, deep char from the grill, and the slight sweetness of the fat synonymous with Iberico pork, imparted through the pigs’ diet of acorns.

Unusually, the meal was completed by the arrival of a sushi dish and a sashimi platter. A soft shell crab roll featured crab cloaked with light batter, rolled with sweet, sticky rice and yamagobo (pickled burdock root), ensnared by a thin layer of nori (£9.80). It’s a contender for the best dish eaten all evening. The same cannot be said for the sashimi platter (£22.60), alas, with its dominoes of salmon, scallop, sea bass, yellowtail and endangered bluefin tuna. The quality of the produce is fine, but all of the fish is served fridge cold although ordered at least 40 minutes beforehand, and the flavour is heavily compromised as a result: each gorgeous sliver almost completely indecipherable. A sad conclusion from the kitchen also responsible for such hits as the soft shell crab roll and Iberico pork pluma.