Within Gare de Lyon train station in Paris, Le Train Bleu epitomises a golden era of glamorous railway travel. Befitted with cavernous ceilings, grand frescoes, chandeliers and immaculately dressed waiters, the restaurant has been a fine dining institution since first opening in 1901. It’s also one of the most storied restaurants in Paris – arguably […] 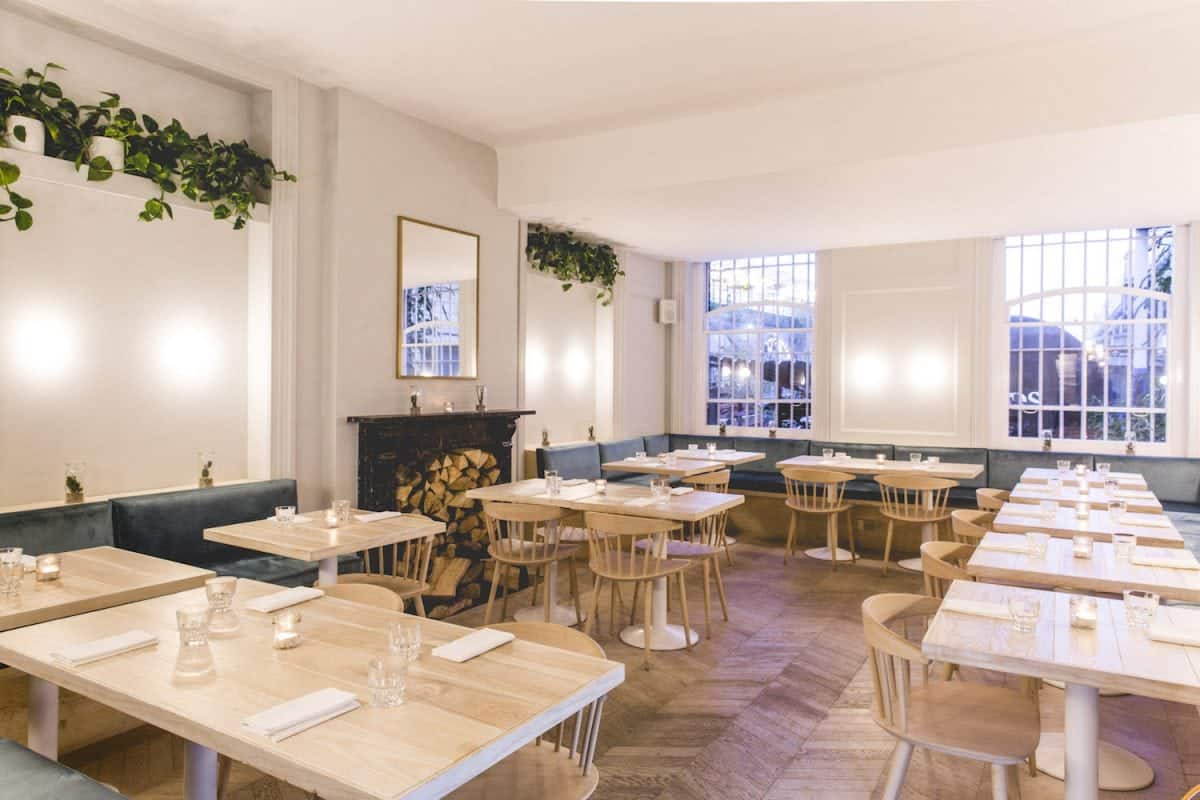 Within Gare de Lyon train station in Paris, Le Train Bleu epitomises a golden era of glamorous railway travel. Befitted with cavernous ceilings, grand frescoes, chandeliers and immaculately dressed waiters, the restaurant has been a fine dining institution since first opening in 1901. It’s also one of the most storied restaurants in Paris – arguably the fine dining capital of the world. Although a fast-paced traveller’s menu is available, the restaurant seems completely removed from the train station dining we’re used to on this side of the channel. Here, we’re generally expected to snarf costly baguettes from Upper Crust or malodorous parcels from the West Cornwall Pasty Company and consider ourselves lucky. Opened last year, however, Coal Rooms took over the former ticket office building at Peckham Rye train station.

Coal Rooms isn’t a train station restaurant, per se, but less than a minute’s walk from the platforms, it may as well be. Though less swanky than Le Train Bleu, the restaurant’s transformative refurbishment is striking; respectful of the former 1930s Grade II listed ticket hall. Even the original gents’ toilets have been refurbished (now unisex), festooned with foliage that acts as decoration and as urinal bollards. The whole place, in fact, seems like a touching homage to Peckham, one of London’s most historically and culturally rich districts. The most appealing place to live in London, according to The Sunday Times in 2017, Peckham is now home to a constantly growing number of exciting cafes, bars and restaurants; from the ingeniously named Peckham Springs, through to Frank’s Cafe atop a multi-storey car park, now joined by the brand new Peckham Levels – seven floors of food, drink, events, exhibitions and more.

Opened by the Peckham-based entrepreneurs responsible for the Old Spike Roastery, coffee-based charity Change Please, Spike + Earl in Camberwell and Aside restaurant (also in Peckham), Coal Rooms’ refurbishment has allowed a large section of the site to be revealed for the first time since the 1930s. Split into sections, the space’s entry is occupied by a café, which transforms into a bar during evening service. Past the café, a large, sunken open plan kitchen fills the air with the primal scent of roasted meats, leading into the main dining space that’s sympathetically lit, white-washed and simply furnished with light wood tables and chairs, plus swish blue bench seating that stretches around the room’s perimeter. Service is casual and helpful, while the evening crowd is unexpectedly mixed. Even more surprising is Coal Rooms’ complete lack of overbearing ostentation, generally associated with new restaurants that tick so many ‘on-trend’ boxes.

Coal Rooms also has an on-site butchery, so it’s hardly surprising there’s such a prominent focus on meat. This is not an American Guy Fieri-inspired dude food emporium, nonetheless (thankfully). Instead, the menu is fairly simple, unfussy but big on flavour and very reasonably priced (mains generally cost less than £15, and we’re not expected to order a torrent of sharing dishes). Though meat is a prominent focus, we begin with an eel dish that seems a touching love letter to the area, namely M Manze pie and mash shop. A contemporary interpretation, no less – jellied or stewed eels are exchanged for a tranche of sweet and sticky smoked eel, cloaked with a lurid green parsley sauce. Here, the sauce is rife with flavour of parsley and gelatinous pig’s trotter, accompanied by diced lardo and missiles of fried gnocchi, harbouring firm, pleasant texture in slight contrast to the eel.

Elsewhere, half a cauliflower is roasted over the grill’s scorching embers, dusted with Japanese furikake seasoning and dressed with a bagna cauda sauce; a classic Italian dip in which the kitchen here substitutes traditional anchovies for miso, lending an explosion of umami flavours. While Coal Rooms’ menu has a domineering focus on meat, this is the type of dish which proves vegetables can be equally rousing when prepared with some adventurousness.

The selection of mains is concise, generally split into four meat dishes and a single fish offering. Two goat dishes are available during our visit – smoked shoulder and Cabrito chop (a kid goat under three-months). The chop is properly cooked, thick and tender – not too dissimilar to lamb, only sweeter. To accompany, a choice of ten sauces made in house are available, each explained by a waitress who recommends Jerk caramel to convoy the goat. With widespread popularity of Indo-Caribbean curry goat, we already know Jerk seasoning and Scotch Bonnet chilli pairs exceptionally with goat, while the sauce’s restrained caramel element has moreish sweetness that offsets the spice yet doesn’t overpower. From the ‘fish’ heading, soft-shell crab is dredged in light batter, deep-fried and coated with fruity curry sauce. The crab and curry combination is enjoyable, though the puffed rice grains have little taste; visually disconcerting, like maggots.

Alongside the eel, ‘Peckham Fatboy’ potatoes are the best thing eaten at Coal Rooms. This stack of externally crisp roast potatoes is crowned with melting Raclette and mayonnaise embellished with beef fat, then sprinkled with crumbs of crispy onion. Ruthlessly decadent, this is, possibly, the most exciting side dish in London at the moment. Charred Hispi cabbage coated with jerk spices and shards of pork crackling is another fine example of notable side dishes. To finish, ‘apple and cheddar pie’ is the sort of dessert which demands to be ordered, largely out of sheer curiosity. The pie’s short-crust pastry incorporates cheddar cheese, almost like a cheese scone, simply rammed with a contrasting filling of cubed apple and topped with a pleasing mound of cinnamon ice cream.

To merely regard Coal Rooms as the best train station restaurant in London would do it little justice. Moreover, it’s certainly one of the city’s best openings of last year, joining a list of exciting restaurants and bars sharing its SE15 postcode.