Until recently, Leicester Square’s only redeeming assets were the Heliot at The Hippodrome Casino’s reasonably-priced steaks, or Burger King’s magical soft drinks dispenser – spilling various drinks we know and love but in outlandish, unfamiliar flavours. The rest of the square remained a toxic wasteland of woefully bad restaurants, the dreaded M&M shop and what’s […] 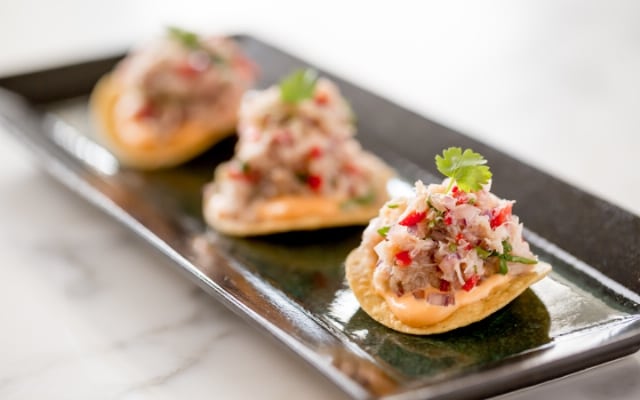 Until recently, Leicester Square’s only redeeming assets were the Heliot at The Hippodrome Casino’s reasonably-priced steaks, or Burger King’s magical soft drinks dispenser – spilling various drinks we know and love but in outlandish, unfamiliar flavours. The rest of the square remained a toxic wasteland of woefully bad restaurants, the dreaded M&M shop and what’s perhaps London’s most overpriced cinema.

On the edge of the Radisson Blu Edwardian Hampshire Hotel, Leicester Square Kitchen is the third restaurant from the group behind Monmouth Kitchen and May Fair Kitchen (sic). In fairness, Leicester Square Kitchen’s name does the establishment absolutely no favours. Even without the calamitous address, the “kitchen” aspect is all terribly Gordon Ramsay or flashy steakhouse. This particular restaurant, no less, is (thankfully) none of the above. Instead, Leicester Square Kitchen offers a fairly extensive menu split into a selection of contemporary Mexican and Peruvian-inspired dishes served in a bright, clean space.  Chiquito, this is not. Service, on the other hand, is efficient and friendly. Glasses are promptly refilled; the food arrives in good time – not too quickly or too slowly – and our waitress constantly refrains from becoming intrusive.

Lunch begins with a trio of crisp, minuscule tortillas capped with a stack of shredded crab meat, raw red onion, coriander and fragrant mayonnaise spiked with ginger. The flavours here are all complimentary, though the crab would benefit from being served at room temperature, juxtaposed to fridge-cold. Three different tacos are chosen from the Mexican side of the menu, favouring soft varieties over hard tacos – scarred for life by Old El Paso’s lappets of calcified cardboard masquerading as corn. Rounds of piquant chorizo are restrained with smooth guacamole, with the entire mouthful pleasantly rife with the flavour of paprika.

A soft taco filled with Mayan spice-marinated chicken also harbours a tantalising mélange of huge flavours: “cilantro” (coriander on this side of the Atlantic, thanks), black lime and garlic are all prevalent on the tongue, though the cayenne pepper mayonnaise is somewhat lacklustre. Far better is the fierce papaya habanero salsa smeared across the taco filled with plump tiger prawns. The same cayenne pepper mayonnaise is also served alongside another dish of tiger prawns fried in thin batter. Here, the flavour is far more apparent, while the prawns are equally gratifying.

Generally speaking, any type of “slider” should be avoided in a restaurant that prides itself on Mexican and Peruvian cuisine. These are clearly marketed towards the general Leicester Square crowd, but seem irresistible when arriving at a nearby table. Three bite-sized brioche buns are stacked with loose patties of spiced beef and molten American cheese. The beef is served on the right side of medium-rare, which brings a wide grin to my face: commendable considering it’s now allegedly outlawed to serve a properly cooked burger in the borough of Westminster. Accompanying jalapeño mayo, however, does push the general theme of embellished mayonnaise to the point of overkill.

From the Peruvian side of the menu, sea bass ceviche is served with avocado, white corn and red onion. The flavours and colours of the dish are remarkable, though the cutting of the fish is slightly thick and thus difficult to chew. Seared robata tenderstem broccoli, charred kale and Shimeji mushroom anticucho reads like a simple dish, but is arguably the best thing tasted. The waitress stresses that the dish is spicy, then returns once more after ordering to check we’re able to tolerate spice. Served in a clay pot, the vegetables are coated with a rich, dark sauce laced with an inferno of heat that builds on the palate. Initially, the spicing (and the general heat from cooking) is somewhat overwhelming, though the spice eventually develops into an extraordinary explosion of pleasant flavour that harmonises the vegetables.

For dessert, warm Chapon chocolate doughnuts are suitably rich and indulgent, complete with caramelised pistachio. Turrón de Hielo, however, is the most rousing dessert on offer, comprised of frozen yoghurt embellished with white sesame nougat, fresh berries, plus a raspberry and beer coulis that tastes similar to Meantime’s Yakima Red beer.

A fine new addition to the (oddly) iconic central London landmark, lunch at Leicester Square Kitchen isn’t perfect, but the flavours extracted with most dishes from the Latin American menu showcase a real flourish of promise that towers over nearby competition from the likes of TGI Fridays, Garfunkel’s, Bella Italia, et al.