By Jonathan Hatchman, Food Editor, @TLE_Food Thank God It’s Not Friday. As the sun sets on Friday evening, Leicester Square inevitably turns into the closest thing that the city has to hell. It’s certainly not helped by the fact that the local Wetherspoon’s is famously one of the very few places so close to the […] 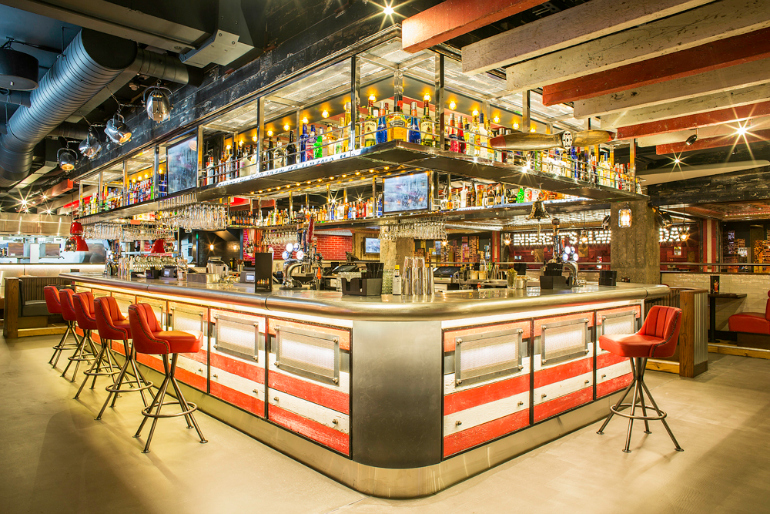 Thank God It’s Not Friday. As the sun sets on Friday evening, Leicester Square inevitably turns into the closest thing that the city has to hell. It’s certainly not helped by the fact that the local Wetherspoon’s is famously one of the very few places so close to the centre where a pint of lager can be bought for less than £5, thus inviting the world and his wife to descend upon the pub like a beacon for some sort of unholy pilgrimage. There’s also not one, but three of the city’s most overpriced cinemas all looking over one another in fierce competition, while the gap is bridged by a number of chain restaurants including Pizza Hut, Chiquito and the dreaded Aberdeen Angus Steakhouse. The area’s only redeeming Friday night feature is Burger King’s soft drinks machine that dispenses popular soft drinks in literally every flavour imaginable. That’s providing the queue is shorter than the great wall of China, for once, and you’re able to order before the sun rises once more, with the first rays of sunlight highlighting all of the rubble, vomit, and urine littered streets suffering from the previous night’s excess.

A new addition to the parade of chain restaurants is the newly launched TGI Friday’s, just a stone’s throw from the Piccadilly branch opposite the now closed Trocadero Centre. So close, in fact, that we ended up arriving at the wrong restaurant only to find that our table was a little further down the road. Quite fortunately, it’s only a 30 second walk. Well, it would have been if the red carpet premiere of Creed hadn’t taken over the whole of Leicester Square and resulted in various footway closures.

To begin on a positive note, it’s clear that restaurant snobbery is alive and well within the world of food, especially within the more popular foodie circles, with TGI’s having become somewhat of a dirty word in this foodie populated city that we live in. Many wouldn’t be seen dead in a chain restaurant like TGI Friday’s for a number of reasons – mainly being that nothing on the menu is endangered or none of the produce has been picked from the chef’s back garden, and the dishes are far less Instagram-friendly than those of nearby relatively new restaurants such as Bao, Shotgun, or The Smoking Goat. At the end of the day, this is a multi-national chain restaurant made for a completely different wave of people.

The thing that is most upsetting about TGI’s, alas, is the fact that the menu prices are in no way justified in accordance with quality. To start, we were greeted by a friendly waiter and escorted to our table, a tiny booth that’s unkind to elbows as we cut our food. Décor wise, this new restaurant is very typical of the chain’s other branches, bedecked with all sorts of kitsch Americana and pop culture memorabilia that straddles the very fine line between stylishly quirky and gratuitously tacky. In the middle of the dining space there’s a large bar area that produces the sort of cocktails that David Jason became famous for in ‘Only Fools & Horses’, all concocted theatrically with a firm nod to Tom Cruise’s character in the film ‘Cocktail’. As for the food, it’s split into numerous sub-categories and delivered suspiciously quickly to the table, almost as though its been heavily pre-prepared, or as though the chefs have been aided by an armoury of microwaves.

Four loaded potato skins (£5.79) arrived at the table, topped with a tangerine orange cheese and a parsimonious smattering of bacon. It’s far from repulsive, but this is the sort of food that tastes as though its been mass produced especially for patients recovering from clinical taste bud disintegration. Then, alike every other dish we ordered, Cajun shrimp (£6.29) were served with barbecue sauce (this particular one infused with Jack Daniels) which most certainly did not work with the fish. Somehow I found deep comfort in these battered morsels, however. Opposed to the comfort that one finds in a brilliant plate of food, this was more of a nostalgic bliss, reminiscent of the sort of breaded food at childhood birthday parties. The accompanying brown, withered salad leaves – on the other hand – were less welcome. Of the three, the Jack Daniels chicken strips (£6.79) were the most exciting appetiser that we ordered, served with sesame seeds and a dressing that worked surprisingly well with the bed of shredded lettuce.

Three different racks of ribs are available here. Although having ordered a full rack of the Fridays BBQ ribs (£16.99), a mere half was delivered, before being replaced minutes later, although the taste of the new plateful did instead fit the description of the Jack Daniels (yes, more bourbon) ribs dusted with a blend of Cajun spices that worked discordantly alongside more barbecue sauce. Meanwhile, a 3 Little Pigs sandwich (£11.49) comprised three types of pork: Jack Daniels pork belly, BBQ pulled pork, and bacon, accompanied by coleslaw, more lashings of barbecue sauce and some sultanas, quite peculiarly. In terms of taste, the sandwich was adequate, although the belly was overcooked and the pulled pork was dry. It felt very much as though the poor pig had been killed twice: once in the slaughterhouse and again in the kitchen.

London has far worse restaurants than TGI Friday’s, the food is for the most part unexciting and uninspired, though it’s unlikely that the chefs are to blame completely, especially considering that much of the food is more than likely pre-prepared and delivered. There’s far too much overcooked meat and an obsession with barbecue sauce and Jack Daniels. While TGI’s does have some moments of promise, it’s the sort of place that’s best left to pre-theatre family dinners especially for the children and for tourists to take a quick, relatively cheap meal between taking photos of Piccadilly Circus and visiting the dreary M&M’s World.