A symbol of the transient nature of life, the cherry blossom (sakura) season is a big deal in Japan. Dating back to the eight century, hanami (literally meaning “looking at flowers”) parties and picnics take place each year as the cherry blossom front sweeps the length of the country, typically beginning as early as February […] 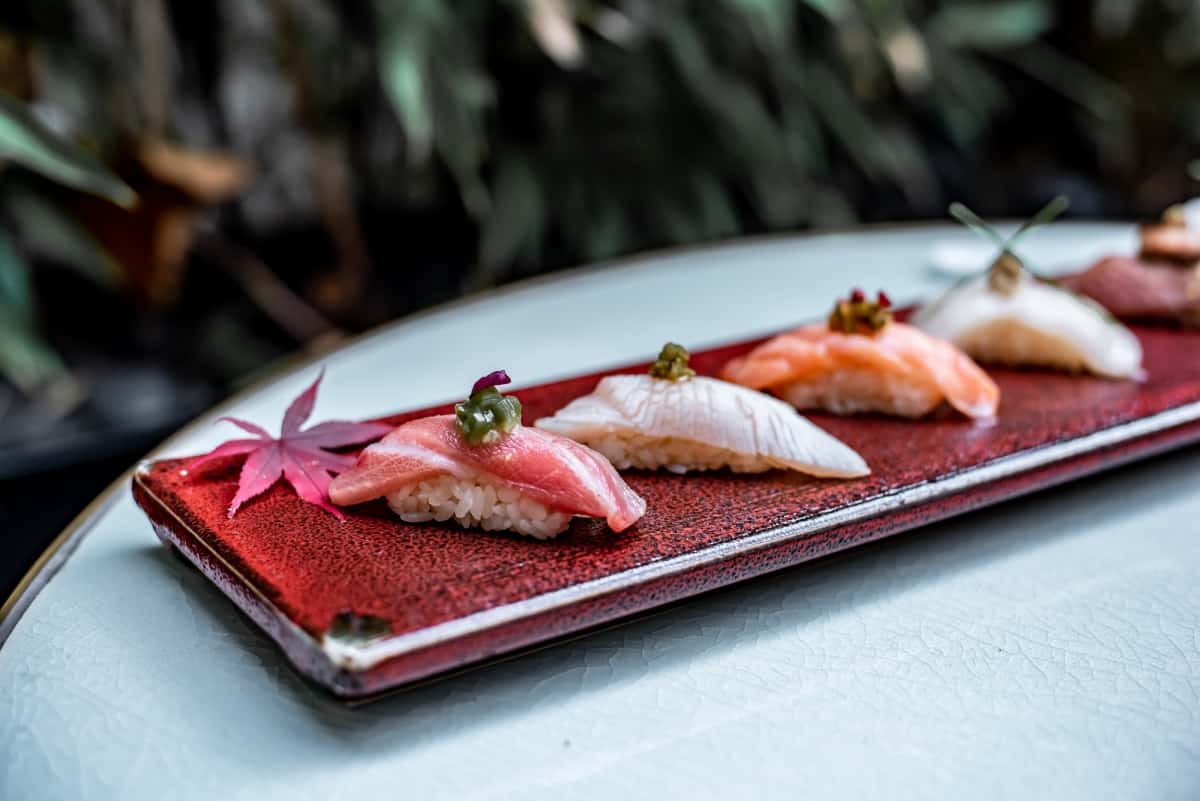 A symbol of the transient nature of life, the cherry blossom (sakura) season is a big deal in Japan. Dating back to the eight century, hanami (literally meaning “looking at flowers”) parties and picnics take place each year as the cherry blossom front sweeps the length of the country, typically beginning as early as February in Okinawa, concluding in Hokkaido around May. Throughout this period, countless festivals and celebrations take place throughout the country beneath the sakura trees, where families and friends gather to appreciate the short-lived blooms.

Moreover, in celebration of the sakura festivities, retailers across Japan begin to fill their shelves with sakura-infused products, some of which are as far-fetched as cherry blossom Pepsi, sakura KitKats and sakura beer. Restaurants also celebrate similarly, with a number of London restaurants having also participated this year. Dinings SW3 – a high-end Japanese restaurant in Knightsbridge – for instance, launched a concise Sakura Menu, designed by Executive Chef Masaki Sugisaki. Using fresh fish sourced from Cornish day boats, the menu includes the likes of sakura-infused red snapper with Kinshi omelette; or sakura-cured red snapper with sakura salt and petals. A ‘sakura martini’ has also been created especially, blending Ketel One vodka with rhubarb liqueur and cherry blossom essence.

When the original restaurant opened in 2006, occupying a tiny Marylebone site, Dinings became a big hit, serving a distinctive take on Izakaya-style food, inevitably receiving endless comparisons to the likes of Nobu. Here, the cooking is largely Japanese, yet playfully embellished with European leanings. Over a decade later, a second London site took over a former artist’s studio, most recently inhabited by Toto’s. Inside, Dinings SW3 is vaster than the original, set across two floors. Past the first of the venue’s bars, a 10-seat sushi bar segues the main dining area that’s basked in natural light at lunch and generally minimalistic. While the room has an undeniable air of opulence, the atmosphere is decidedly relaxed, augmented by charming wait staff. At the sushi counter, where we perch, two composed chefs prepare an endless parade of sushi and sashimi dishes with unparalleled discipline.

Dinings SW3’s Omakase (literally meaning “to entrust”) menus are more akin to tasting menus, with dishes listed in advance. A number of these menus are available to choose from, with additional highlights from the a la carte menu also recommended. Sake pairings, favouring the restaurant’s own label sake, brewed by Konotomo – a family-run brewery – also demand to be sampled.

The ‘Signature’ menu (£75 per person) began with a duo of ‘tar-tar chips’, a signature of the restaurant, described as being “like Japanese tacos”. Bite-sized crisps were delicately crowned with lavish toro tuna dice and a blob of mayonnaise harbouring a lick of jalapeño; or pearls of Scottish scallop with avocado and a jaunty little beret of flying fish roe. An intermission from the sakura menu featured petite Kumamoto oysters (£3.90 each) with their light briny flavour complimented by a whisper of caviar, pickled shallot, and a bold vinaigrette of yuzu and sakura with its faintly soapy flavour not unlike to lavender. Next, sea bass carpaccio championed slivers of superlative fish, lashed with ponzu dressing, joined by delicate cubes of ponzu jelly to add depth of texture, showered with white truffle shavings for an extra lesson in (perhaps unnecessary) excess.

A slipper of double cooked aubergine was considerably less luxurious in terms of ingredients yet had outstanding depth of flavour, heavily glazed with miso and cooked to the point of textural submission: sweet, salty, umami, delectable. Corn fed poussin teriyaki had slight natural sweetness gently contrasted by a cloak of light char from the Josper grill, elevated further by a kick of Sansho pepper. Another pick from the a la carte menu, a minute burger comprised a patty of Wagyu beef and spicy teriyaki sauce (£9). Although a remarkable take on a gussied-up comfort food staple, I can’t help but question the necessity of mincing such celebrated beef, renowned for its texture. In this instance, a less expensive breed would have worked just as fittingly, teamed with the delightfully springy steamed bun.

Lunch’s definitive highlight, however, came with the sushi course. A trio of superlative nigiri had a base of warm rice, expertly prepared and slightly aged for optimum depth of flavour. Scottish salmon was served with an intriguing onion soy jam and yellowtail belly with bracing yuzu kosho. The domino of seared o-toro (fatty tuna) was simply sensational, nonetheless, closely followed by an inside-out roll packed with prawn tempura and a spicy taramo sauce. All exceptional. Also from the sakura menu, lunch concluded with a contemporary riff on îles flottantes (£9.50), featuring a soft yuzu meringue floating on a pool of crème Anglaise flavoured with sakura, finished with blobs of shiso leaf gel and a rocher of smooth rhubarb sorbet.

While Dinings SW3 is less cosy than the Marylebone original and is at the costlier end of the spectrum, the food is of a mostly remarkable standard, as is the service and the gentle spectacle of watching the skilled sushi chefs at work. A gorgeous tribute to the flavours and precise craftsmanship synonymous with Japan.