Devastatingly, most of London’s Japanese restaurants have become poseur pilgrimages, instead of dining institutions. Terminuses for those who’ll choose a place for dinner based on the “vibe”, dress like stars from terrible films and push their raw fish around a slate, pretending to have fun before settling the four-figure bill and posing for optimum Instagram […] 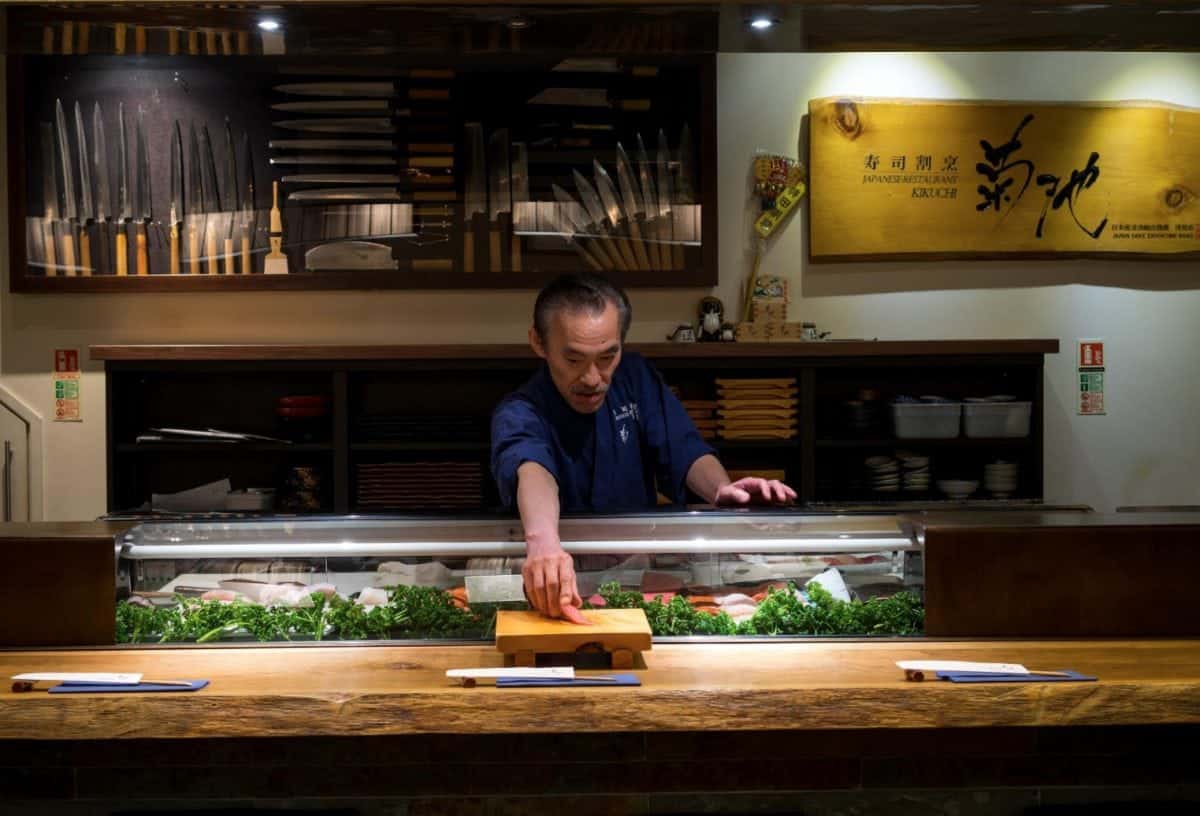 Devastatingly, most of London’s Japanese restaurants have become poseur pilgrimages, instead of dining institutions. Terminuses for those who’ll choose a place for dinner based on the “vibe”, dress like stars from terrible films and push their raw fish around a slate, pretending to have fun before settling the four-figure bill and posing for optimum Instagram likes. Kikuchi, however, is a saving grace for those of us that actually enjoy Japanese food. Here, there are absolutely no bells, whistles or “live DJs” who blast torrents of contrived dance music from their MacBooks.

After 19 years, the restaurant has recently introduced an Omakase-style menu. Meaning ‘to entrust’ in Japanese, Omakase is a traditional Japanese menu style, leaving the customer’s ‘culinary journey’ completely in the hands of the chef. At Kikuchi, the Omakase menu aims to reflect the skill and artistic craft of Chef Patron Masayuki Kikuchi, with two sittings available for dinner, at 18:00 and 20:30. Tonight, our menu begins with an assortment of sashimi and a wooden contraption that harbours three glasses of sake. The first, Tedorigawa “Iki na Onna” is clean with flavours of honey; Masumi “Arabashiri” is vivid with floral aromas; and Kokouryu “Jinmai Ginjo” is a classic western Japanese style, with deep, rich, earthy flavour.

As for the sashimi, discs of scallop are, like all of the sashimi, served at body temperature, instead of fridge-cold, which allows the fish’s flavour to develop further on the tongue. Oily salmon has remarkable freshness, while slivers of sea bass have a slightly ‘muddier’ flavour, both of which are of flagrant exceptional quality. Elsewhere, two styles of tuna are present. Classic slivers of yellowtail are enjoyable, though it’s the fatty Otoro cut from the fish’s belly that taste absolutely sublime. Another plate of sashimi brings paper-thin slivers of sea bream, prettily fanned into a semi-circular arrangement and joined by garnish that’s, for once, actually edible.

Next, tempura prawns are crisp and greaseless and as close to perfect as possible, while tempura sea urchin transforms the mollusc’s acquired texture into something enjoyable without economising on taste. These are joined by a king crab leg the size of a toddler’s arm; lightly grilled to further display the crab’s sweet meat, arguably superior to lobster. The sushi at Kikuchi, however, is the main draw. An assortment of nigiri each have slightly warm rice topped with sensational fish and the occasional smear of wasabi – the proper stuff, not green-dyed horseradish. More salmon, tuna and sea bream are presented, plus potent, oily mackerel is luscious with the rice, as are luminous orange spheres of gunkan that pop on the tongue and sweet-savoury Japanese omelette. The grilled unagi (eel), however, is the main standout – alongside the Otoro tuna. With a charred outer, entertaining a smack of umami, the eel is tender, meaty and simply enchanting.

Miso soup comes at the end of the meal, decorated with a plump king prawn and clams that add spades of flavour to the creamy, umami broth. To finish, scoops of green tea and sesame seed ice cream provide a simple conclusion, without completely ruining the lasting taste of outstanding sushi. With two Omakase menus at £80 or £120 per person, dinner at Kikuchi is expensive. But with some of London’s best sushi and the high-quality ingredients used, it’s a replenishing far-cry from the Novikovs, Sexy Fishes and SUSHISAMBAs of the world. And that, alone, should be more than enough reason to book a table.

Kikuchi can be found at 14 Hanway Street, London, W1T 1UD.