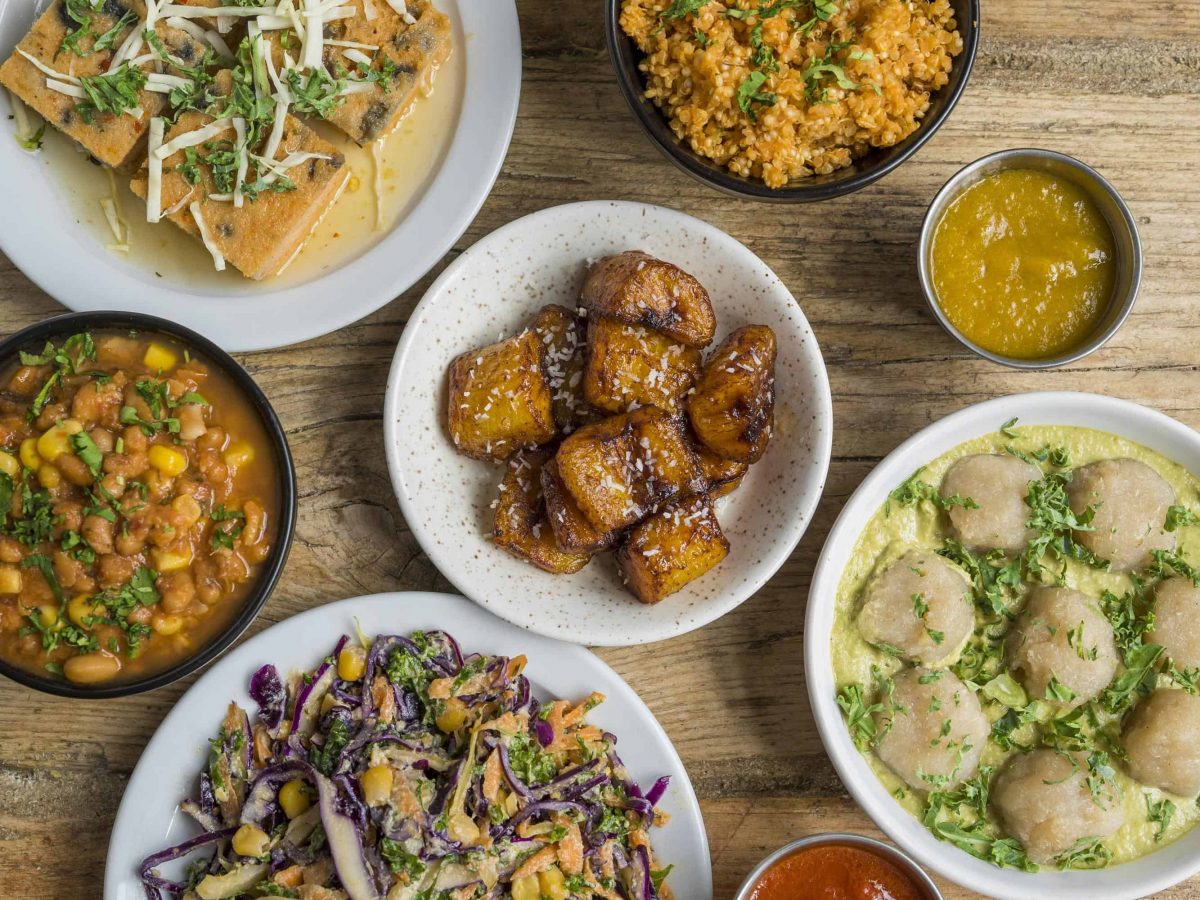 Following a string of pop-ups and a successful crowdfunding campaign, siblings Ifeyinwa and Emeka Frederick will open Chuku’s on Tottenham High Road. Billed as the world’s first Nigerian tapas restaurant, with Chuku’s the brother-and-sister duo hope to celebrate the beauty of Nigeria, giving people in the UK an opportunity to experience the richness of the country’s culture, providing a culturally immersive dining experience. Nigerian sharing plates will be served against a backdrop of rhythmic afrobeats, contemporary art and street photography with the intention of evoking a taste of Lagos.

At Chuku’s, dishes will be centred on authentic Nigerian flavours, with some dishes featuring a unique twist, such as their Jollof quinoa – a healthy spin on traditional Jollof rice; and plantain waffles, the restaurant’s signature dessert that’s both gluten-free and vegan-friendly. Elsewhere, the restaurant’s opening menu will include dishes such as suya meatballs; kuli kuli (a northern Nigerian peanut snack); ojojo made with yam, and smoked mackerel croquettes with Scotch Bonnet jam. Moreover, the menu will also showcase a selection of new dishes which include recipes from northern Nigeria, home to the Hausa-Fulani tribe.

Following the success of restaurants in Soho and Marylebone, JKS Restaurants will open a third Hoppers in Pancras Square, King’s Cross. Heavily inspired by the coastal journey from Colombo to Galle, the restaurant’s interior will take numerous cues from famous landmarks along the scenic route, while the other restaurants’ inspiration taken from the home cooking and roadside stalls of Sri Lanka and southern India will also be championed at the new restaurant.

Here, the menu will feature a selection of dishes exclusive to the King’s Cross restaurant, including bar bites and ‘short eats’ such as chilli and curry leaf peanuts; Jaffna Isso Vade with curd chilli; and Ambulthial cutlets and sizzling beef Poriyal. These will be available alongside karis and grills, such as southern fish curry;  tempered bean and cashew kari; Pettah whole quail kari and quail egg pahe; Blue Swimmer crab kari, and black pepper curry leaf prawns.

The new restaurant will also serve an extensive bar menu, with a selection of beers on tap, including two of Hoppers’ own brews – the ‘Hoppers SPL’ (Sri Lankan Pale Lager) in collaboration with local brewery Camden Town Brewery; and a ‘Toddy Ale’ in collaboration with SALT Beer Factory in Bradford. Cocktails, on the other hand, will be inspired by classic 1960s Tiki-style drinks, blended with tropical flavours from the sub-continent. Guests can also order ‘tap cocktails’ such as Nitro Frothy Kappi – a play on an espresso martini.

Hoppers King’s Cross is set to open on Tuesday 11th February and can be found at Unit 3, Building 4, Pancras Square, London, N1C 4AG.

London’s most popular pasta restaurant, Padella is set to open a second site. Taking over a site on Phipp Street in Shoreditch, the new restaurant will also be joined by an in-house bakery.

Sister restaurant to Trullo in Islington, Padella was opened by Tim Siadatan and Jordan Frieda in 2016, occupying a small site on the edge of Borough Market. The restaurant has since become remarkably popular for its accessibly-priced fresh pasta dishes and antipasti. In addition to a handful of Padella classics such as pici cacio e pepe, and pappardelle with eight-hour Dexter beef shin ragù; the Shoreditch restaurant will also introduce a new fritti section, which will change regularly throughout the year.

Padella is set to open on Thursday 13th February and can be found at 1 Phipp Street, London, EC2A 4PS.

Taking over the restaurant space at Whitechapel Gallery, Townsend is set to open this week. A modern British dining room with a menu of “creatively constructed seasonal dishes”, the new restaurant is named for Charles Harrison Townsend, the grade II-listed gallery’s architect, known for combining classical British themes with his own original style. This has inspired the philosophy of Head Chef Joe Fox’s (Petersham Nurseries, Hix Restaurants) menu.

Changing daily, Townsend’s lunch and dinner menu will focus on showcasing high-quality British produce alongside an evolving wine list. Expect dishes such as Mayan gold potato with egg yolk, Berkswell , and winter truffle; or curried veal sweetbread with cauliflower, sprout tops and burnt onion. Mains, on the other hand, may include the likes of grilled salsify with red cabbage, Jerusalem artichoke and collard greens; or roast haunch of venison with ruby beetroots, wild cabbage, ale-braised onions, sour cream, and horseradish, for two to share. To finish, ginger and treacle pudding with clotted cream ice cream will be available alongside Yorkshire rhubarb, pear sorbet and marjoram. Moreover, wines served at Townsend are chosen for their accessibility and value, with a concise list focusing on old world vineyards and a mix of natural and traditional methods.

Townsend is set to open on Wednesday 5th February and can be found at Whitechapel Gallery, 77-82 Whitechapel High Street, London E1 7QX.

Having operated in Milan for over 120 years, Giannino Dal 1899 will branch out with its first international opening. Arriving in London this month, the new restaurant will continue to showcase the traditional Italian home cooking championed in Milan from a site on Blenheim Street.

Specifically designed to embody the welcoming atmosphere at the original Milan restaurant, Giannino Dal 1899 London will serve ‘traditional dishes with a modern twist’ prepared by Executive Chef Salvatore Suzzi. Here, the menu will include dishes such as Babà di Lasagne al Ragù Na- poletano; or Spaghetti Aglio with Olio e Peperoncino, and Mazara Del Vallo Red Prawns crudo. Homemade desserts, on the other hand, will include the likes of orange cannoncini with Namelaka cream and raspberry sauce.

On the launch of the new restaurant, Giuseppe Varrella, General Manager of Giannino Dal 1899 Milan, said: “Since we first had the idea, we always wanted to make sure that if we ever expanded internationally our venues would maintain the same level of class and refinement, while still effectively melting into the fine dining London scene.”

Giannino Dal 1899 is set to open in February and can be found at 10 Blenheim Street, London, W1S 1LQ.

This article was updated on 9th February with new Padella information and an updated opening date.