These are the best pubs in West London. 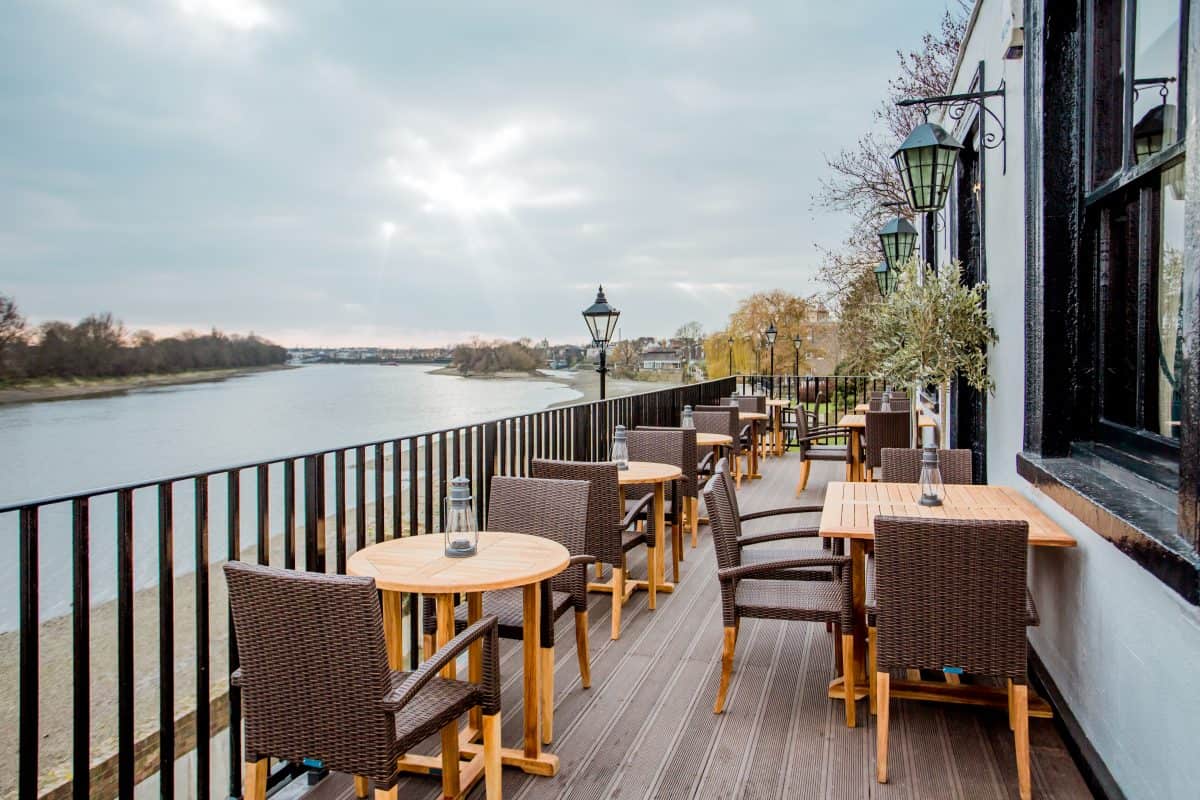 A cornerstone of society, the pub has played a vital role in British history for many centuries. While classic pubs continues to be celebrated (in the UK and beyond), countless establishments have disappeared from our villages, towns, cities, and high streets. Now, more than ever, these institutions rely on our support, most notably due to the extraordinary strain caused by the effects of the coronavirus pandemic. As businesses continue to re-open following the second national lockdown, we pick the best pubs in West London.

A picturesque riverside pub, The Old Ship has become somewhat of a West London waterside landmark, established in 1722. Resembling a Roman villa, the pub also has a riverside terrace, which offers sweeping views of the Thames, and is a particularly popular spot for watching the boat race. A comfortable pub, expect a standard Young’s drinks offering, while the food menu utilises seasonal and local produce in its traditional and modern pub food classics.

The Antelope can be found at 87 Maple Road, Surbiton, KT6 4AW.

A cosy venue on Westbourne Park Road, The Cow recently celebrated its 25th anniversary. One of the first gastropubs of note, the West London pub continues to champion excellent food, with a particular focus on seafood. A pint of Guinness with six oysters is one of the pub’s most popular orders, and for good reason.

Arguably the prettiest pub in West London, The Churchill Arms is particularly famed for its extravagant floral displays, said to cost over £26,000 a year to maintain. The pub’s festive budget also stretches to around 90 Christmas trees and almost 12,000 lights. Inside, the pub’s décor is equally extra, festooned with Second World War regalia. As well as serving a decent selection of real ales, the Fuller’s pub also claims to have been the first London pub with a Thai restaurant.

The Churchill Arms can be found at 119 Kensington Church Street, London, W8 7LN.

London’s only Michelin-starred pub, The Harwood Arms re-opened with a slight refurbishment and a new menu from head chef Sally Abe, following the first national lockdown. Renowned for its focus on British food and game, the pub was awarded a Michelin star in 2010, though the atmosphere is surprisingly relaxed. Beer is well kept and best enjoyed alongside top-tier bar snacks. As for the food, the new menu includes the likes of oyster and English sparkling soup with seaweed, lemon, and an oyster beignet; Berkshire pork chop with crackling, pease pudding, and sauce charcuterie; and a raspberry marshmallow teacake. The West London pub was also the first Michelin-starred restaurant in the UK to use vegan meat from THIS™ on its menu – in the form of a vegetarian Scotch egg using plant-based bacon.

The Harwood Arms can be found at Walham Grove, London, SW6 1QP.

On a quaint residential street, The Scarsdale Tavern provides somewhat of a retreat from the busyness of Kensington High Street. Being a Fuller’s pub, expect the standard range of well-conditioned ales from the West London brewery, such as London Pride or Seafarers, and a food menu that champions elevated takes on pub classics.

The Scarsdale Tavern can be found at 23A Edwardes Square, London, W8 6HE.

With a terrace capturing expansive views of the Thames, a pub has operated from this site since the 17th century. As well as boasting Charles II as a former regular, James Thompson is also said to have composed ‘Rule Britannia’ at The Dove. Owned by Fuller’s since 1796, expect a range of the brewery’s well-condition ales, brewed just down the road, as well as a food menu celebrating pub classics with modern flourishes.

Owned by Pubs of Distinction, the pub occupies a grade II listed building, built in 1827. A comfortable, friendly pub, The Hansom Cab focuses on craft beers, often from local breweries, as well as a food offering which includes stone-baked pizzas from Knead Pizza, ‘desi craft burgers’ from Burger Singh, and Son of a Chippy’s fish and chips and homemade pies.

Dating back to the 14th century, The City Barge was famously featured in a scene from The Beatles’ Help! Another riverside pub, the venue is named after an old barge once moored between the building and Oliver’s Island, used as a toll collection vessel. Following a 2014 refurbishment, some of the original fixtures have been preserved, including Victorian panelling and open fires, while the bar offers seven rotating hand pull ales and an extensive wine list. Food is at the ‘gastro’ end of the spectrum, with some elevated takes on pub classics also served.

The City Barge can be found at 27 Strand-on-the-Green, London, W4 3PH.

A neighbourhood pub near Paddington station, The Cleveland Arms has been operating since the mid 1800s. Taken over and lovingly restored during 2014, the pub now strikes an intrinsic balance between stylish and homely, honouring the Grade II listed building’s character. With a pub at the front of the building, the dining room at the back pushes the West London pub towards the ‘gastropub’ end of the scale, though with significantly less affectation than many pubs to adopt the ‘G’ word. In the kitchen, chef Elisabeth Passédat serves a weekly-changing menu, using sustainable and seasonal ingredients to produce “traditional British and European food, with a twist.”

The oldest pub in Acton, The George and Dragon dates back to 1759, but the building is believed to have been used as a pub of some description since Medieval times. Rich, dark wood panelling and the stone fireplace remind customers of the high street pub’s history, while the venue is also home to a microbrewery: Dragonfly Brewery. Elsewhere, craft beers are well represented here, with a changing selection championing the likes of Beavertown, Siren, Tiny Rebel, Magic Rock, Thornbridge, Clouded Minds, Wiper & True, Wild Beer, and more.

The Earl of Lonsdale, Notting Hill

On the corner of Westbourne Grove and Portobello Road (towards the Notting Hill Gate end), The Earl of Lonsdale is a comfortable Samuel Smiths pub, restored using the venue’s original Victorian plans. As a result, the West London pub is all dark wood and etched glass, with wooden screens partitioning the main bar into five distinct areas, in addition to the open plan back room and a spacious beer garden. An old fashioned pub with a focus on socialising (in so far as mobile phones and tablets are forbidden), it’s also worth noting that the chain also steers away from large corporation spirits and soft drinks. Instead, everything served here is produced by the North Yorkshire brewery, from the competitively priced beers through to crisps, peanuts, and pork scratchings.

Another riverside pub, The White Cross is so close to the Thames, part of the beer garden floods during high tide. Built on the site of a Franciscan friary, the charming West London pub has plenty of outdoor seating, large bay windows looking out onto the river, a fireplace, and various nooks which contribute to lending a cosy atmosphere during the colder months. As well as offering a range of Young’s beers, the food menu also champions “high quality, freshly made food with the best British seasonal ingredients.”

The White Cross can be found at Riverside, Richmond, TW9 1TH.

Another popular spot for watching the boat race, The Blue Anchor is a traditional riverside pub. Originally called the Blew Anchor and Washhouses, the pub has been licensed since 1722, with olde worlde wood panelling adorning the downstairs pub, while an upstairs ‘River Room’ has been refurbished quite recently, offering sweeping views of the Thames. As well as offering a warm, sociable atmosphere, four real ales are always served on tap, alongside a range of premium lagers and ciders, while the food menu features well-made takes on classic pub grub.

Just around the corner from Lord’s Cricket Ground and minutes from the picturesque canals of Little Venice, The Prince Alfred has served locals since 1856. With mahogany and etched glass features, the pub’s original ‘snob screens’ have been retained, partitioning different areas of the bar – although not ideal if you’re taller than the average Hobbit. As a Young’s pub, expect a range of three or four ales on draught, while the pub’s Formosa Dining Room is also worth a mention.

The Prince Alfred can be found at 5A Formosa Street, London, W9 1EE.

Just north of Hyde Park, near Marble Arch station, Connaught Village is home to The Duke of Kendal. A residential corner pub, the venue is particularly charming with its friendly, comfortable atmosphere. Split into a main bar and dining room, the bar serves two regulars and one changing cask ale, while the food menu is accessible and reasonably priced (especially considering the postcode). The main draw, however, are the music nights, with sing-alongs taking place around the main room’s old piano

The Duke of Kendal can be found at 38 Connaught Street, London, W2 2AF.

Fulham’s oldest surviving tavern, Eight Bells occupies a Grade-II listed building, dating from the 18th century. Close to Putney Bridge station, the West London pub serves a selection of regular and changing cask ales alongside home-cooked food. Within spitting distance of Craven Cottage, the pub is particularly lively on Fulham match days, having become somewhat of a hub for away fans.

The Eight Bells can be found at 89 Fulham High Street, London, SW6 3JS.

Rumour has it that the Bull’s Head was used by Oliver Cromwell as a secret HQ during the civil war, before escaping to the consequently named Oliver’s Island, via a tunnel. But don’t hold that against them. A riverside pub, Bull’s Head dates back to 1777, but has recently undergone a fresh refurbishment, turning office space facing the river into another dining room, alongside hoping to create a cosy home-from-home setting. The outside wall has also been reinforced, in attempt to prevent water from seeping through the wall at high tide. Owned by the Chef & Brewer Collection, expect a range of regular Greene King beers alongside some rotating cask ales, while the extensive food menu is split into sub-sections, with something for everyone.

Another Big Smoke Brew Co. pub, The Sussex Arms is a year-round real ale festival. A stone’s throw away from Twickenham Green the pub has log fires for the winter and an ample beer garden for the summer months. As for the drinks, three regular beers are served alongside a large selection of rotating real ales and ciders, equating to around 15 in total. The pub’s food menu also offers a selection of traditional takes on pub classics.

The Sussex Arms can be found at 15 Staines Road, Twickenham, TW2 5BG.

A post shared by The Black Dog Beer House (@blackdogbeerhouse)

Occupying the former Albany Arms site, The Black Dog Beer House opened towards the end of 2018. Having formerly worked on revitalising The Sussex Arms in Twickenham and The Antelope in Surbiton, the directors behind this new Brentford pub have set out on their own. As well as being home to a new microbrewery, Fearless Nomad, The Black Dog also places an emphasis on craft beers, with 14 keg options, eight real ales, and five real ciders.