A self-contained meat and ale utopia from one of the capital's most promising micro breweries. 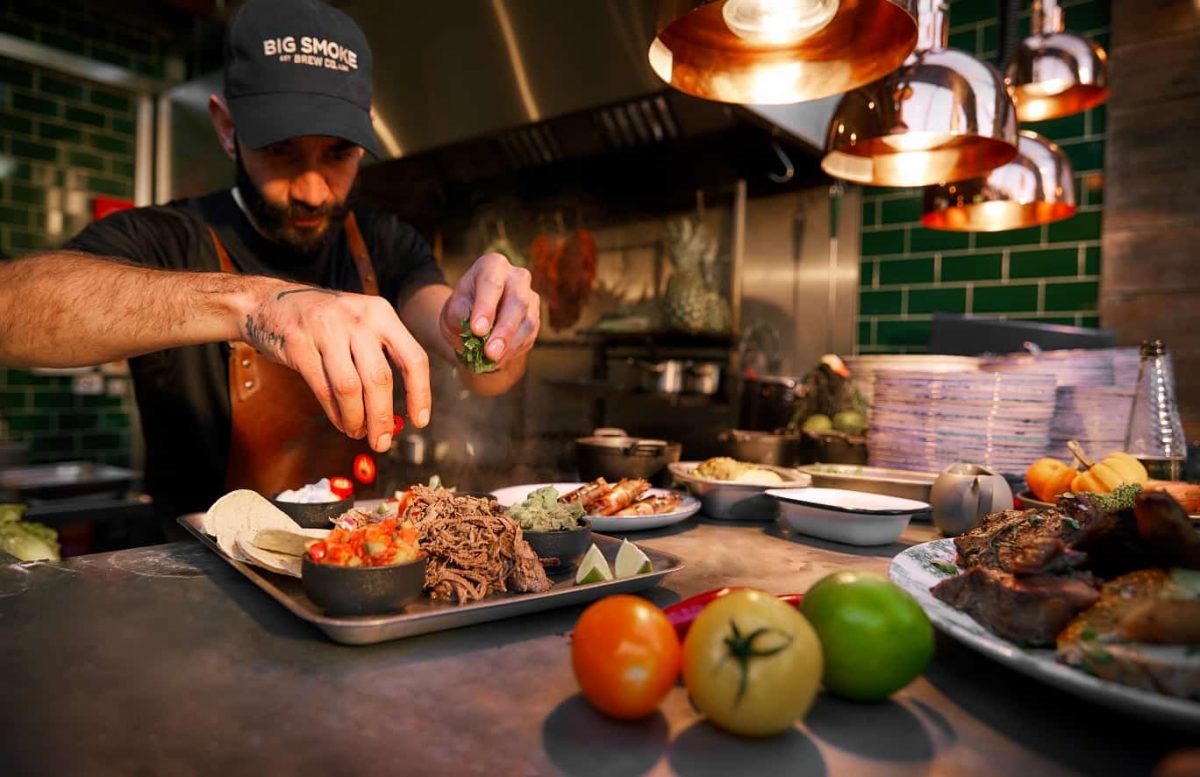 It’s a bitterly cold Wednesday evening as I slouched down into a hollow, worn leather armchair next to a roaring fire at The Antelope pub in Surbiton. A pint of Big Smoke’s milk stout rests on the table next to me, showcasing a devilishly moreish palate of malted biscuits, milk chocolate and vanilla.

Until recently production of the brewery’s range of beers had taken place in an old stables at the back of the pub, where a range of flavoursome, hard-hitting and additive free ales won widespread acclaim in their formative years. But in a bid to expand its presence outside London the guys have moved 20 miles down the road to new 5,000 sq ft. premises which will increase capacity four fold and add a new canning line to cater for an increased demand in off-trade.

In its place a rustic new dining space, The Brewhouse, has opened featuring a wood-fired Parilla grill, retractable roof and well stocked bar offering the full range of Big Smoke brews. Following a drink in the bar we headed through to the restaurant where a warm waft of smoky scents greeted us at the door along with a solitary burley chef and waitresses in oversized chequered shirts.

The classically North American vibe felt at odds to the quintessential Britishness of the pub, but oddly in keeping with it at the same time. As publicans and craft beer brewers Big Smoke has successfully rebranded a number of pubs across the capital in the same ilk, fusing traditional elements with influences from across the pond – and it works quite wonderfully.

DIY tacos are served on metal trays to allow the assortment of slow cooked meats to spill freely across the surface. Pots of guacamole, salsa, chillis and crème fraiche line the corners of the tray and fresh coriander, lime and wheat tacos are tossed on top in a haphazard way. It’s not pretty, but nor is it meant to be. It’s a dig in and get dirty dish that is best enjoyed when manners are cast aside.

From the bites menu, smoked makerel paté and charred flatbread is delectable. Burnt tips from the wood-fired bread compliment the oily fish pate perfectly with dollops of crème, chillis, lime and coriander creating a well-balanced, rounded flavour. Brisket Croquettes are similarly pleasing, particularly when paired with a Medicine Man or stout beer.

For main course, the pork rib chop was cooked well but a lack of sauce left it regrettably dry. A salmon fillet, the fish of the day, was also a tad on the dry side but a healthy complement of chimichurri sauce, lemon juice and delicious grilled artichoke carried it over the line. A side of smoky BBQ beans never appeared on the table, although weren’t particularly missed.

Deserts saw a pretty standard jab at a mud pie which was complemented by crunchy hazelnut ice cream and a crusty outer ring of nuts and chocolate sauce. The BBQ fruit kebab was too intriguing not to try, although curiosity definitely killed the cat in this instance, with a bizarre mash up of fruit slices skewered over a grill for reasons unknown.

Overall it was a thoroughly pleasant experience that could be improved upon with a few minor tweaks to the menu. It also feels as though the restaurant would benefit from becoming a little more self-contained rather than having all the beers shipped in from the pub next door. Styled as a utopia for meat and ale lovers, it’s definitely missing a trick on that front.