by Hugo Brown
in Bars 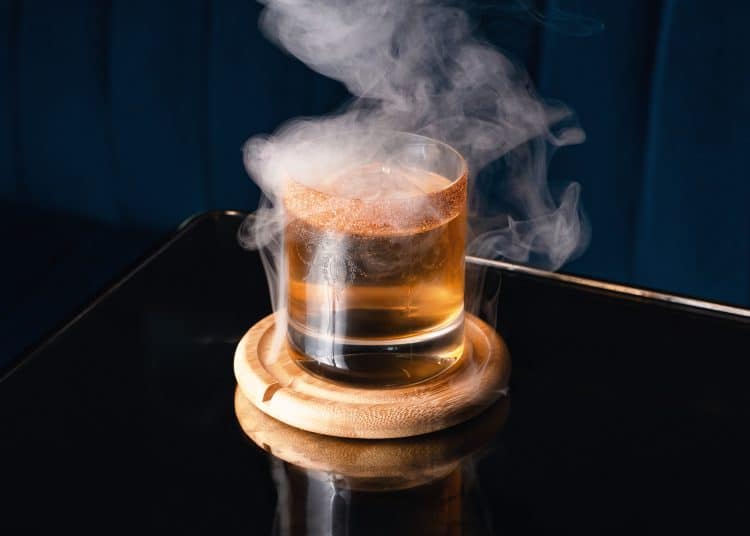 ‘Since the beginning of the pandemic’, ‘before lockdown one’ and ‘for at least 18 months’. We keep hearing these phrases. They throw our gaze backwards to a time that most would consider more normal. But perhaps we need to start firmly looking forward again. After all, we can buy a drink from an actual person at the bar, UK hotels are stuffed to the brim, large scale events are running smoothly and people are talking more about queues at petrol stations than the pandemic. Indeed, in the last couple of months a friend of mine has visited France, Spain, Scotland and Italy. Admittedly, that is irregular but that’s the right kind of irregular. A flicker of positivity, glimmer of hope, whatever cliché you’d like to use, is on the horizon (apologies again). And after a week which of good news for travel, it was fitting to visit the Churchill Bar and Terrace in Marylebone to try the World of Wanderlust cocktail menu. These are travel inspired drinks created from the bar staff’s own experiences. Think a hot air balloon ride over the Masai Mara, camping on the calm shores of Lake Como or an autumn evening on the streets of Edinburgh.

On arrival our waiter told us that his cocktail (called High Altitude) was inspired by a trip to the Himalayas. What struck him most on this holiday was how the weather could completely transform his surroundings. One day low clouds, mist or fog would mean a close, intense atmosphere while a clear day resulted in spectacular views of the mountains around him. It’s easy to sense the pride that comes from each member of the team and their respective involvement in this menu.

As the name suggests, Winston Churchill and his wife Clementine were the inspiration for this bar which is part of the Hyatt Regency. Inside, bookshelves have been curated by Daunts – everyone’s favourite London bookshop – there are photographs of the couple, love letters and outside there’s a large outdoor heated terrace where cigar smoke hangs heavy. This might not be to everyone’s taste but it seems a fitting tribute to the former Prime Minister.

This is more of a bar than a restaurant. The menu is slim but this can be seen as a positive rather than a negative. A select few quality dishes is always preferable to a range of average ones. And there is a good selection of small plates including Cornish crab choux, devilled eggs, crispy halloumi, charcuterie boards, beef carpaccio, English Burrata and smoked salmon with charcoal crackers.

We started with barbecued octopus which was fresh and smoky; serving its purpose perfectly was a healthy basket of fried whitebait with tartar sauce and lemon; and a bowl of good, plump olives is always a welcome accompaniment to any drink. More importantly though, Florida’s Key West was our first port of call with the Whitehead 907 – similar to an old fashioned but with a strong hit of that often forgotten but classic flavour of the American south, apricot.

After Key West, we flitted to the Himalayas for the aforementioned High Altitude – a striking red cocktail with a tequila base, paprika rimmed glass, sherry and cardamom extract. The Churchill Bar is part of the Hyatt and, while doing many things well, large chains are not often known for their personality. But the World of Wanderlust menu does manage to achieve something personal. Indeed, the staff are clearly enthused at being able to have some input and it’s nice to see the excitement with which they recommend their own cocktail and, crucially, others. It’s clear they have spent a lot of time discussing and hearing about one another’s experiences. There’s a sense of collective pride.

For the main course we had seafood linguine which was heavy on the garlic but, in this instance, the strength of flavour worked well with similarly intense cocktails. Next, we headed to Spain for La Tomatina – inspired by the Valencian tomato throwing festival – and the near-gimlet is perhaps my favourite of the evening. It’s something different, refreshing but also quite salty and savoury. My companion finished on Lake Como, visually impressive with a blue ice cube, greenery surrounding the tumble and essence of cedar tree hovering over the drink to evoke those warm Italian summers.

We can be as optimistic as we like but the truth is we’ve all been a little travel starved over the last couple of years and the World of Wonderlust is the perfect antidote to this, especially with winter rapidly approaching.