Like the characters who wear several layers of clothes even though it’s a hot summer in 1833 in Baile Beag, an Irish speaking community in Donegal about to have a new civilisation and language imposed on them by the English, director Ian Rickson’s production of Brian Friel’s Translations (1980) is shot through with multiple meanings, […] 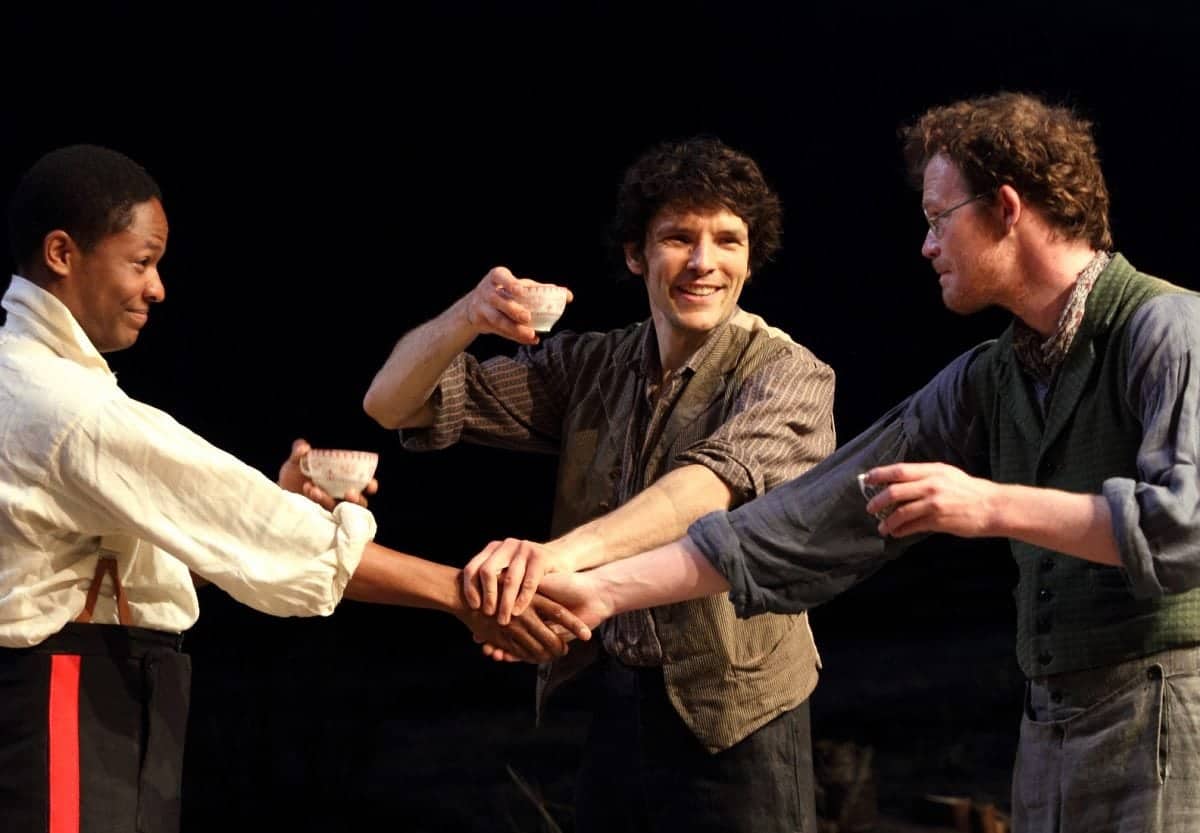 Like the characters who wear several layers of clothes even though it’s a hot summer in 1833 in Baile Beag, an Irish speaking community in Donegal about to have a new civilisation and language imposed on them by the English, director Ian Rickson’s production of Brian Friel’s Translations (1980) is shot through with multiple meanings, some of which seem untranslatable into words- apt as Friel’s part inspiration for the play was George Steiner’s After Babel, a reflection on the science of language where he is sympathetic to the idea that languages “approach a monadic and untranslatable kind of existence.”

The play wrestles with the problems of language, translation, politics, history and colonisation and is an analysis of the characters’ relationships to its main thematic concerns through their own personal and privately fought dramas.

It takes place in a hedge school, informal places of education set up in rural communities across Ireland. This one, which becomes a temporary base for the English and is run by the incessantly drunk, but increasingly erudite master Hugh and his ardent nationalistic son Manus, is a rectangular platform carved aggressively out of the turf set against the rounded body of a hill- a deliberate attempt by designer Rae Smith to suggest that the school contrasts painfully with the introduction of a standardised educational system and to illustrate Hugh’s own awareness that “a civilisation can be imprisoned in a linguistic contour which no longer matches the landscape of fact” -a recognition that his own Gaelic tongue and the languages of Greek and Latin taught in his school are on the way out as fast as the English are coming to his community to survey the land and anglicise Irish place names.

Assisting the English military or “sappers” is Owen, Hugh’s other son, returned from Dublin to act as mediator and translator between the English and the Irish. With him is Lieutenant Yolland, with whom he bonds and who is horrified at his part in this colonising expedition and determined to learn Gaelic and fit in with the local community. Around these protagonists are a medley of students who struggle with impediments or other problems, among them Bridget (an earthy Aoife Duffin) and Doalty (an edgy Laurence Kinlan) who share a less lofty relationship to language than their teachers.

It’s often traditional to analyse this play through its linguistic ingenuity and commentary on the decimation of cultures through miscommunication and the eradication of local tongues by outside imposing forces but in this production, it is hard not to focus on Owen- the real outsider here perhaps- as a pivotal and destructive force who swaps his translating responsibilities for the lure of shaping narratives and changing “confusing” place names and the power that this brings. Rickson and his movement director Anna Morrisey put Owen literally at the centre point of many physical triptychs-often between the person requiring translating and the receiver (quite literally a triangulation of translation). We are forced to immediately and often analyse Owen’s role (here portrayed as roguishly flippant but also conflicted by Colin Morgan who seems born for the part) which is complex and ethically compromised and lacking in moral compass. Instead Owen plays story maker, deliberately mistranslating the English and match maker and reveals an unconscious need for power-or perhaps a desire to usurp it-by mimicking the body language and postures of his English superiors, Captain Lancey (a sharp Rufus Wright) especially.

In fact, so many power struggles- inner and outer- are mapped out, the production becomes not just a study of cultural imperialism, but how power is a force which ascends upwards and is borne out by each and every one of these character’s relationship to language, learning and themselves. The students sit where they want until Hugh arrives, but even this is dominated by an informal hierarchy- Sarah who has difficulty speaking (played compassionately by Michelle Fox), sits on the periphery of the group in contrast to the self-empowered Maire (a boisterous yet vulnerable Judith Roddy) who dreams of learning English and going to America and who sits centre stage at the front. As soon as Hugh walks in though, he imposes his own formal hierarchy, which is in turn usurped by the arrival of the English and Owen. Manus (played with a sensitivity and doggedness by Seamus O’Hara) finds meaning and empowerment by encouraging Sarah to speak-at the beginning of the play urging the words out of her with physical gestures- but as he goes on, and as he loses that power and connection to self and language through personal disappointment, begins a turning in which renders him emotionally distant and weak. Even Yolland is set up brilliantly by actor Adetomiuh Edun to give off an air of innocent romanticism which contrasts with his unconscious sense of privilege and superiority emphasized by his physical domination of the room in the Hedge School, prompting servility from an unaware Owen in turn.

As the sappers take over both in a physical sense and through their language, Hugh and Manus throw their precious books around as if they are imprisoning forces. Does the richness of their culture which allows them, in Hugh’s words, to be “spiritual people” also imprison them?

And how much is the need to communicate and the appreciation of the sensuousness of words connected? Dermot Crowley’s Jimmy, Hugh’s brilliant, but drunk and lost pupil, does not revel in speaking Latin and Greek aloud-he does not linger over the words-because, one assumes, he lives in them too much, as obsessed as he is with marrying the mythical Athene. On the other hand, Yolland and Maire, who cannot speak each other’s languages and yet become desirous to communicate, speak sweet nothings to each other in perfect rapture and enjoyment, although they understand nothing. It’s only when Jimmy later really needs to communicate something passionately that he seems to really feel the words.

Language is a utility then, a practical force enthused with a passion to communicate one’s experience, even if the sense of it cannot be understood.

How is language and physicality connected? Words seem to come from the depths of characters’ beings and prods bodies into movement through desperation. When Yolland and Maire cannot understand each other, they show their distress and humour using their bodies… Manus in contrast grows lamer. Sarah’s own psychological state impacts on her ability to speak and she becomes cowed, Owen too, when he has an epiphany, or the beginnings of one, retreats into Gaelic, forgetting his English and becomes a shadow of himself. Bodies suffer in this production though there are moments of physical tenderness-when Hugh, Manus and Owen want to express love for each other, they come together in a three, arms around each other. No need for any translator here. Similarly, there is a tender moment between Yolland, Owen and Manus, in a circle of three, instead of a triangle.

Steiner thought that silence was the only solution to the problems caused by multiple languages and when one language would like to dominate all others- perhaps a silence as silent and as changing as lighting designer Neil Austin’s stormy clouds. As impending doom beckons, set against a canvas which reaches out to even our most modern of political problems, the characters do seem to get quieter and more internal as if in homage to that. Ciaran Hands’ Hugh though-played here as quietly resigned and sad- is the only character who can coherently defend his native language that is “full of the mythologies of fantasy and hope and self-deception” and who seems to have a prophetic sense of what is to come – he is not mourning for the death of people perhaps, but more for the death of a culture- underscored by some impressive music and sound from Stephen Warbeck, Ian Dickinson and the musicians.