He has been described as a “genius” and is spoken about in the same breath as the masters of Russian literature—Gogol, Pushkin, Dostoevsky and Chekhov. This praise is matched with numerous literary awards, but who, exactly, is author Vadim Babenko? 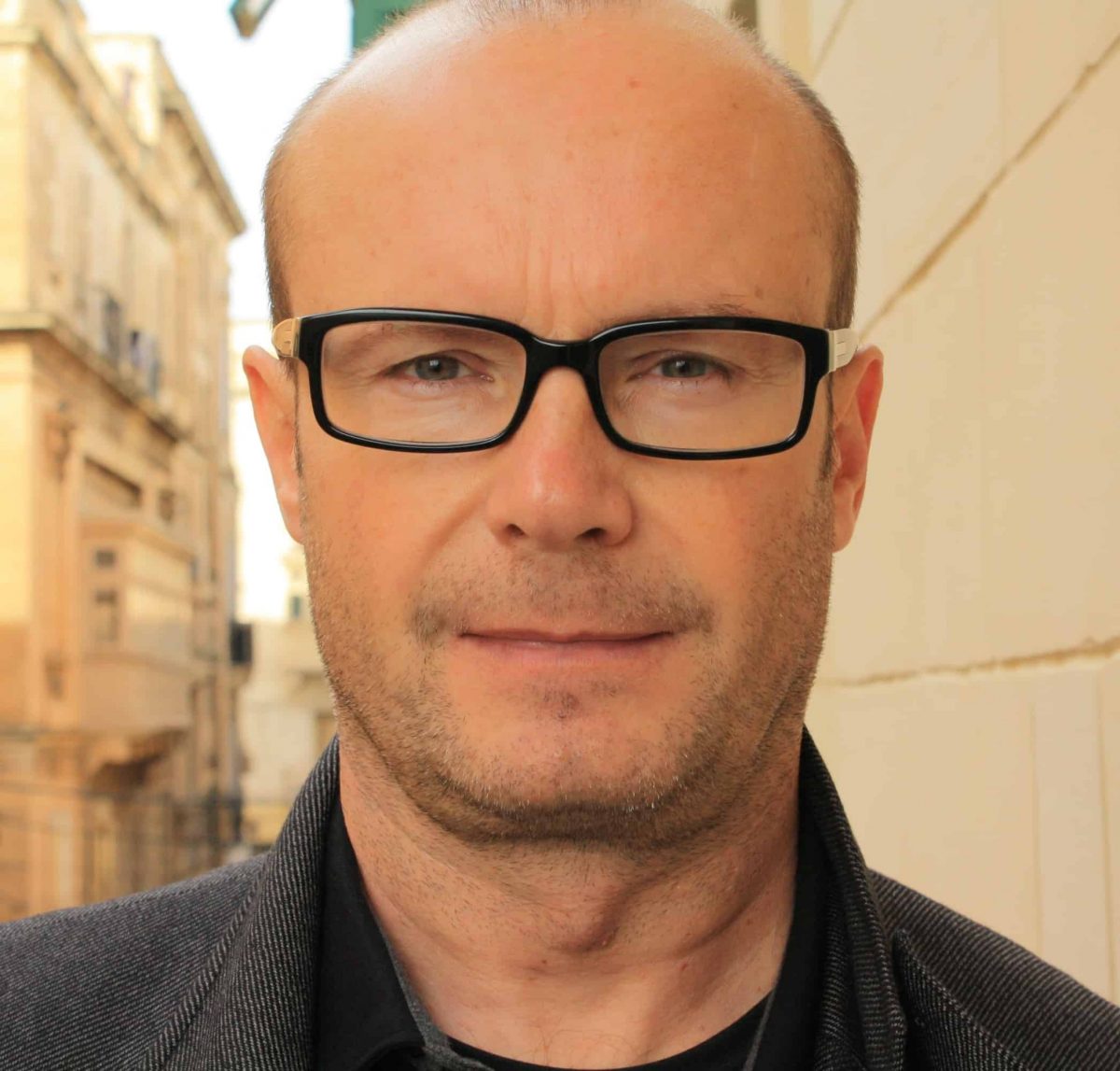 Award-winning author Vadim Babenko, who has just received an Exceptional Talent visa from the Home Office.

Having recently relocated to the UK, thanks to the receipt of an Exceptional Talent visa from the Home Office, Vadim is just beginning a new chapter of his incredible life journey. Hype is rarely fully justified but Britain’s latest cultural import could be the exception to the rule—perfectly in keeping with this most non-conformist of novelists.

Many of us secretly dream of becoming an artist, quitting the rat race to pursue a more authentic and rewarding path.

The same, however, can’t be said of author Vadim Babenko. Prior to his radical reinvention as a novelist of literary fiction and hard sci-fi, he was working within one of the most stimulating and exciting fields of modern science: bioinformatics.

A graduate of the Moscow Institute of Physics and Technology, Russia’s equivalent to MIT, Vadim was a scientist of some repute, migrating from theoretical physics to artificial intelligence and then, finally, to microbiology.

Soon after receiving his doctorate degree in the early 1990s, the Soviet Union collapsed and so Vadim chose to relocate to the United States where, together with another Russian scientist, he launched InforMax Inc., a biotech start-up. That this was accomplished “with no money and no connections” is an achievement in itself, but the company soon flourished thanks to an array of unique technologies developed by Vadim during his years in science.

The business enabled other scientists to analyse microbiology data faster and more efficiently and was soon a hot property “skyrocketing” its way to commercial and financial success.

Vadim continues the story: “In 2000, we brought the company to IPO on NASDAQ. That was the highest point of my business career.

“I was a CTO (chief technology officer) and senior vice-president of a successful public high-tech company specializing in applying AI methods to genome analysis – the hottest possible combination of buzzwords at that time. Everyone wanted me, and I was getting lucrative offers from all sides. I was at the peak of my success.”

This, however, is where the narrative begins to take its unusual swerve, as Vadim explains:

“The year that our firm went public, I began to feel I was no longer in control of my life. I was spinning in a whirlpool of events and duties, of the interests and opinions of others.

“The main problem concerned my writing. I had always considered literature to be my calling, something I had a real aptitude for. I promised myself that as soon as I had the chance to write without worrying about money, I would put everything else aside and write great novels, devoting all my energy to them.

“With the success of InforMax, the means had materialised to do just that. I hadn’t struck it rich, but was able to afford to engage in activities that didn’t bring immediate income.

“Along with the financial comfort, however, I had received an upper-management position, a big office, a few assistants, and many subordinates. I now had power and status, but also expectations concerning my future. It was time to answer a question: what would I choose?”

Vadim wrestled with this dilemma for nearly a year before the answer he was desperately seeking finally came to him – while standing on a beach in North Carolina.

While gazing meditatively at a flock of black pelicans hunting nearby, he heard an urgent cry of distress. Upon investigation he found a woman and a fallen man, who had just suffered a heart attack.

Vadim called emergency services and the stricken man was rushed to hospital, but the experience, he says, had in an instant altered his whole perspective on life.

He says: “Judging by his looks, the man was only slightly older than me. This was a reminder of the transience of life, something which always clears your head.

“The incident had only lasted briefly, but I felt awakened in another life. I looked around, as if unable to recognize the coast, the ocean, or the dunes. Then I headed toward my house and suddenly saw the pelicans had stopped hunting and were perched upon the water by the coast, rocking on the waves.

“I walked almost right up to them and they weren’t afraid by my approach. The one closest, it seemed, looked me in the eye. I held his gaze and told him, “Yes.” I said it out loud, knowing all my issues were resolved and no doubts remained. Furthermore, I knew at once the title of my first novel – I simply had no other choice.”

The next week, Vadim notified his associates that he would be leaving the corporate world. He had consciously walked away from his “winning position in one of the most promising, challenging and rewarding fields”, and with it “stepping away from serious money”, to follow another calling.

He freely admits that the path since then has not been easy, something he attributes primarily to an “extreme nonconformism”.

He has, however, worked tirelessly and diligently to hone his craft. His first novel, dutifully entitled The Black Pelican, was published in 2006 followed soon after by A Simple Soul.

These novels are works of contemporary literary fiction and have received high acclaim since their release. The original Russian-language editions were nominated for the National Bestseller and the Big Book awards, Russia’s most prestigious literary prizes, with The Black Pelican being a finalist in the ‘Literary Fiction’ category. The English-language version of A Simple Soul, meanwhile, won America’s National Indie Excellence Award in the ‘General Fiction’ category.

The books were equally well-received by reviewers and readers alike. Vadim’s debut was hailed as a “sagacious novel” and a “potential new classic” while A Simple Soul was praised for displaying the “magic of the great Russian novelists”, sharing their “kaleidoscopic explorations of love, sadness, happiness and revenge”.

The next novel, Semmant, however, would mark the beginning of another shift for Vadim Babenko, introducing a new element: science fiction.

Speaking about the work, which tells the story of a troubled cybernetics genius who creates a new AI entity, Semmant, Vadim said: “I’d come to realise that real science, which I wasn’t afraid of because of my education and background, and real life are not that far from each other.

“I began to see two distinct depths of meaning, which complimented each other and had to be considered together.

“The novel explored the virtual versus the real; artificial intelligence and precise math versus everyday life and bursts of human emotions. It was a successful project, winning the National Indie Excellence Award in the ‘Science Fiction’ category, and I was then convinced that this was the way to go for me as an author: merging, blending science and serious literature together.”

Vadim’s novels have always transcended genres, another example of his non-conformism, but this has become more pronounced since Semmant.

His latest release, 2019’s The Place of Quarantine, is a balance between hard science-fiction and literary fiction and, he says, the “most evident example of what I try to do as an author”.

It tells the story of a brilliant scientist whose rationalist worldview is overturned when he dies and finds himself in a mysterious place called ‘Quarantine’. Combining non-mainstream yet still scientifically-sound theories of quantum physics and neuroscience with an emotive story of eternal love and predestination, it is a staggering achievement.

Vadim will continue to investigate the novel’s principle themes of human consciousness, and the interplay between causality, free will and fate, in his next novel, Cogito Man, which he is currently writing.

Commenting on his new direction, he said: “My most recent, science-fiction, novels are based on real science and have nothing to do with pseudoscience.

“I do not pretend to create scientific theories and I’m not one of those ‘alternative’ intellectuals who try to come up with a new “theory of everything.”

“Rather, I try to find connections between existing, and promising, theories and some phenomena of real life that cannot be explained by mainstream science. And I try my best to be rigorously honest in my efforts.

“Maybe it sounds naïve, but I do see a great sense in trying to make a step beyond the ordinary and to make people think differently.

“My main aim is to combine the power of literary texts, where the ‘magic of words’ creates new meanings, angles and views related to our world, our lives and our reality with ideas of true science, utilizing my significant scientific past.”

It is a noble goal, and one that has received the blessing of the Home Office, which recently granted Vadim residence in the UK through an Exceptional Talent visa.

A very limited number of places are made available for these visas each year and, to be successful, the applicant requires the endorsement of a ‘designated competent body’ as an emerging leader in their qualifying field. In Vadim’s case, this was literature and he received the backing of cultural public body Arts Council England.

Vadim added: “After significant achievements in science and business, it has been really difficult to establish myself on a comparable level in literature.

“Nevertheless, I have managed to be sort of successful and receiving the Exceptional Talent visa has validated that assessment. It means a great deal to me, as do the literary awards and, most importantly, the feedback from my readers.

“I now look forward to the next phase of my literary career in my new adopted home and to continuing to deliver hard science-fiction novels that neither cheat on the legitimacy of the science or the emotional power of the fiction.”

The Place of Quarantine by Vadim Babenko (Ergo Sum Publishing) is available now from Amazon, priced £24.99 in hardcover, £12.99 in paperback and £3.23 as a Kindle eBook. For more information about the author, visit www.vadimbabenko.com