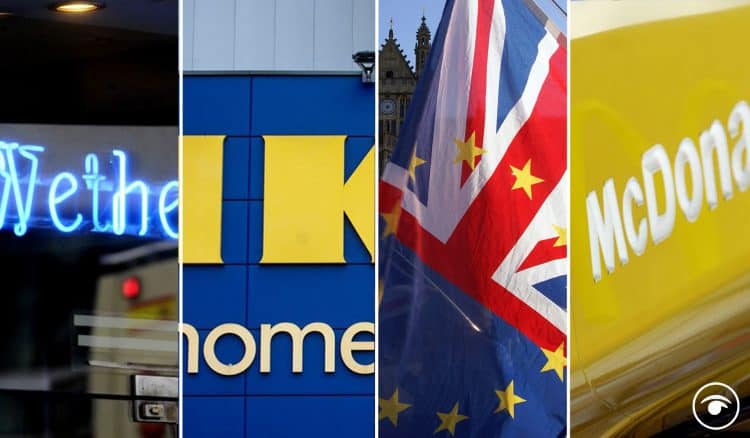 Shoppers have reported some of the Swedish firm’s stores have completely run out of items, including mattresses, amid labour shortages which have impacted transport, raw materials and sourcing.

Fears that shelves could be emptied in the aftermath of the Brexit transition were dubbed “utter tosh” by prominent Leave campaigner Nigel Farage, who dismissed thegovernment’s Yellowhammer report outlining potential consequences of the UK’s split from the European Union.

Asked in a 2019 Robert Peston interview why “anybody would vote” for the sort of disruption outlined in the paper, he said:

“I’ve never seen such utter tosh in my entire life. Unlike the civil servants sitting in Whitehall, I spent 20 years in international trade, buying and selling goods and shipping them all over the world.

In that spirit, here’s a list of all the companies which have faced post-Brexit supply chain issues:

Nando’s was forced to shut 45 restaurants after suffering a shortage of chicken as industry suppliers warned supply chain disruption is “not going away”.

Signs in restaurant windows blamed a shortage of stock from suppliers while customers were also told online that it was impacted by “isolation periods” among staff.

Fast food giant McDonald’s ran out of milkshakes in all of its UK restaurants due to supply chain problems.

The burger chain has also been left without bottled drinks across its 1,250 outlets in England, Scotland and Wales.

A spokesman reportedly said the group is suffering supply chain issues, but is “working hard to return these items to the menu”.

Northern Ireland was the only place in the UK where you can buy the shakes, due to the customs border being down the Irish Sea.

The boss of one of the UK’s biggest retailers warned that current food shortages are at a “worse level” than he has ever seen.

Steve Murrells, chief executive of the Co-operative Group, said the retailer has significantly reduced its range of some products to help serve customers.

He told the Times newspaper: “The shortages are at a worse level than at any time I have seen.”

Mr Murrells said the disruption to supply has been driven by “Brexit and issues caused by Covid”, and the firm is retraining staff as lorry drivers to help fill vacant roles.

Sandwich brand Subway confirmed that it is experiencing issues with some products.

A spokesperson from the sandwich chain said to The Mirror: “We appreciate that supply chain pressure is something a lot of the industry is experiencing at the moment.”

Brexit-backing pub chain Wetherspoons has been staring down the barrel of a beer shortage as it became the latest business to deal with supply chain shortages.

Pints of Carling and Coors are reportedly unavailable in some branches, as problems associated with a lack of HGV drivers batter businesses across Britain.

It is understood that the issue stems from disruption to poultry supplies which forced Nando’s to temporarily close 50 of its stores.

Thankfully, only a small number of products have been affected at this stage.

A company spokesperson said: “Unfortunately, like others, we’re seeing temporary interruptions in supply for some ingredients which occasionally results in shops not being able to maintain full availability on all lines.

“However, we have a wide range of choices in our menu for customers happy to buy an alternative.”

Ikea has apologised to customers blaming Brexit and Covid for their failure to supply hundreds of items to their stores.

Shoppers have reported some of the Swedish firm’s stores have completely run out of items, including mattresses.

A spokesman for the firm said: “Like many retailers, we are experiencing ongoing challenges with our supply chains due to COVID-19 and labour shortages, with transport, raw materials and sourcing all impacted. In addition, we are seeing higher customer demand as more people are spending more time at home.

“As a result, we are experiencing low availability in some of our ranges, including mattresses.

“We hope this will reduce as the situation improves in the coming weeks and months. Going forward, we’re constantly looking for more opportunities to secure product availability for our customers and apologise for any inconvenience this may cause.”

UK supermarkets could see food shortages at Christmas due to Brexit-related supply chain disruption, the chairman of Tesco has warned.

John Allan, who has overseen the country’s largest grocer since 2015, said the Government should change rules for lorry drivers to allow for more emergency workers from overseas to help solve the problem.

Mr Allan told BBC Radio 4’s World at One that supermarkets would normally be building stock now ahead of Christmas and that the “straightforward solution” to driver shortages would be “to allow UK industry to bring in skilled drivers from elsewhere”.

He added: “We are very short of drivers, it’s a combination of many EU drivers having decided to go home and also the ageing age-profile.

“I think certainly Brexit has been a contributor to that but also improving economies, higher wages in some of the countries that they’ve come from historically, have also led to that flow.”