“Ministers have no hesitation in calling for public sector pay restraint, but turn a blind eye to shocking City excess." 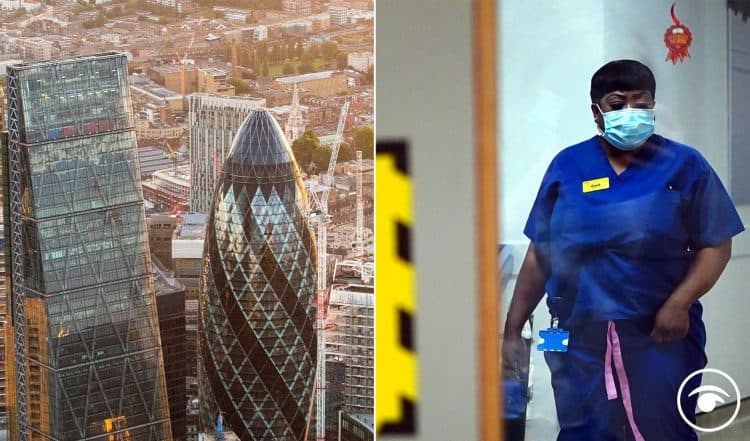 Bonuses in the City are at a record high and rising six times faster than wages, research suggests.

It comes as more than 20,000 frontline staff were questioned by the RCN, with many raising concerns over staffing numbers.

The TUC said its analysis of official data shows bonuses in the financial and insurance sector increased by 27.9% over the last year, compared with 4.2% for wages.

The average bonus in the finance and insurance sector rose from £3,146 in the first quarter of 2021 to £4,021 in the same period this year, said the union organisation.

The TUC said record payouts suggested that City executives’ bonuses of the pre-financial crash era were back.

City bonuses in March 2022 were worth a total of £5.9 billion, it was estimated.

TUC general secretary Frances O’Grady said: “There is no justification for such obscene City bonuses at the best of times, let alone during a cost-of-living crisis.

“Working people are at breaking point, having been left badly exposed to soaring bills after a decade of standstill wages and Universal Credit cuts.

“Ministers have no hesitation in calling for public sector pay restraint, but turn a blind eye to shocking City excess.

“It’s time to hold down bonuses at the top, not wages for everyone else.

“The Government needs to clamp down on greedy bonus culture by putting workers on company pay boards and introducing maximum pay ratios.”

The TUC called on the Government and companies to tackle the bonus culture and high executive pay by introducing maximum pay ratios so that bonuses are no more than 10% of total pay and to ensure bonus schemes are open to all staff on the same terms, no matter their pay grade.

Most nurses warn that staffing levels on their last shift were not sufficient to meet the needs of patients, with some now quitting their jobs, new research reveals.

A survey of more than 20,000 frontline staff by the Royal College of Nursing (RCN) suggested that only a quarter of shifts had the planned number of registered nurses on duty.

The RCN said the findings shone a light on the impact of the UK’s nursing staff shortage, warning that nurses were being “driven out” of their profession.

In her keynote address to the RCN’s annual congress in Glasgow, general secretary Pat Cullen will warn of nurses’ growing concerns over patient safety.

Four out of five respondents said staffing levels on their last shift were not enough to meet all the needs and dependency of their patients.

The findings also indicated that only a quarter of shifts had the planned number of registered nurses, a sharp fall from 42% in 2020 and 45% five years ago, said the RCN.

Ms Cullen will say: “Our new report lays bare the state of health and care services across the UK.

“It shows the shortages that force you to go even more than the extra mile and that, when the shortages are greatest, you are forced to leave patient care undone.

Don’t ever think that it is normal to not have enough staff to meet the needs of patients. It is not.

“Today, members are letting the full truth be known – nursing is saying loud and clear: enough is enough.

“If there was ever a time to break this cycle – it is now.

“It is your professional duty to be concerned about unsafe staffing and we have your back.

“Twenty-five thousand registered nurses left last year – a sharp rise on the year before, at the very moment we cannot afford to lose a single individual. The pressure is too great and the reward too little.

“Nursing staff are being driven out by the current way of working – the shortage of staff and too often the poor culture.

“To those from Government listening to my words – we have had enough.

“The patients and those we care for have had enough.

“We are tired, fed up, demoralised, and some of us are leaving the profession because we have lost hope.”