The fact is, it’s hard to escape your single life when a couple are performing Dirty Dancing in front of your sunbed.

by Dan Harding
in Travel 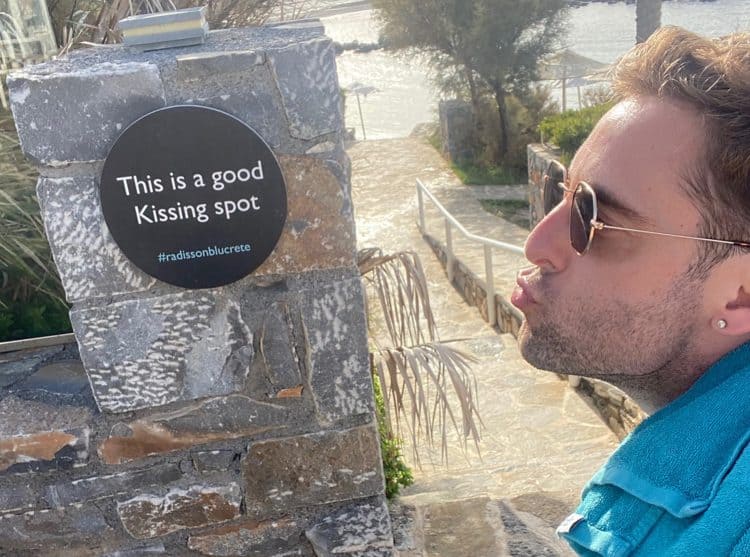 I’ve craved a holiday for 10 years.

But it’s incredible the lengths that a global pandemic will go to in stopping this from happening.

Especially when I needed to escape my tragic single lockdown-life.

Not to mention the confusing guidelines you now have to follow when travelling.

Navigating the government website for how to travel, what list different countries are on and the rules of testing, is naturally harder than learning your times tables.

However, after adding up the right rules and regulations and praying that I was Covid negative, I slapped on my much needed out of office, and took a leap of faith.

Last week I went to the gorgeous Greek island of Crete.

Blissfully unaware that what I had actually booked, was a honeymooner’s couple paradise resort.

Turns out this was not my much-needed escape after all, but a lesson in the reality of being single amongst couples.

Firstly, yes, I’m single. Secondly, yes, I have friends, family and travel buddies, but no one was free. Ok?

Anyway, there was also something exciting about going alone. A break from life. From love. From work. From romance.

Having found a hotel that looked like it wouldn’t have cockroaches and that could also be a place where I would switch off, I booked last minute – two days before I went.

A stressful process that I actually don’t advise during these Covid times.

Armed with three books (ambitious for four days) – I had music, meditation and money to help me survive alone.

This was it. This was what I needed, four days to myself.

No one to answer to, get up when I wanted and do whatever I desired.

After a cab ride that I’d opted for instead of a coach with 18 drop offs, I got to the hotel.

I marvelled at the palace I was to call home for the next few days.

I could not even describe how much I craved a cosmopolitan and a shower.

Maybe even at the same time – I’m on holiday, baby!

With not another guest in sight, (probably in the bar) I checked in and changed, then headed to the lights down at the beach bar.

However, I was tired and alone, and apparently the only one that was.

Everywhere I looked people sat in pairs, holding hands, staring at each other (in-between looking at their phones) in silence.

“Can I interest you in a couples bowl?” The handsome barman muttered.

A choice that I quickly regretted not choosing for myself after the bar shut at 12pm.

My night was over.

It was fine, it was the first night of my adventure. I was on holiday.

Tomorrow would be great. There would be other people. Not just couples.

Waking up the next day, I bounced out of bed.

I threw back the curtains and a couple (not talking to each other,) walked past my balcony.

But a breakfast buffet had my name on it, after a deep application of factor 50, that was where I’d be!

At 9.30am, I had the glorious choices of poached eggs, fruits, hash browns, cereals… then of course, steak, omelettes, roast chicken, peppers with rice and fries.

There was also a love heart arrangement of yoghurts. Which I may or may not have messed up slightly.

4 courses later and a lot heavier, I rolled onto the lounger. Soon to be harpooned poolside by a couple no doubt.

Breaking the spine of my first book, I relaxed.

Then I heard it.

The most annoying, distracting and frustrating sound. Unless you are part of it.

Two people, obviously in love, were intertwined and eating each other’s faces.

I mean, did they not just enjoy the breakfast extravaganza that I did?

How could they still be hungry?

I rolled (again, literally) onto my back and plugged out the world with my headphones.

Blocking out the love-sick infestation forming around me.

Unfortunately, my factor 50 sun cream couldn’t block out the sun or the couples I later discovered.

My solo escape had started off with performances of love everywhere I turned, displayed right before me.

In the space of 8 tanning hours, I had witnessed 9 PDAs.

I’d moved 3 times to hide myself away, but these couples were relentless.

Love could not wait!

First, we had the lounger by the pool, where we had the lip smackers. He bobbed her up and down in the water like a peck-a-thon he wanted to win.

He needed to reach 100 kisses and boy did he surpass it.

Having then moved down to the beach, I went for a swim out to some rocks.

There I sat looking back at the resort, the sparkling sun dancing in the water, alone.

Until a new couple found my safe haven.

Staggering onto my rock, the lady ran her fingers over her husband’s proud pot belly, smiling.

Perhaps at the thought of the new-born he carried in his stomach.

Three was a crowd.

So, I had dived back into the water and left them to it, passing another two smooching couple as I swam.

Finally, I found an empty cove further up the beach and fell asleep.

Only to wake up to not one, but four couples all pecking each other in the water in front of me.

These were the actual words that left my mouth, loudly.

One couple wasn’t even just kissing, they were presenting, for me!

As if kissing hadn’t been enough.

And the clear fact was, it’s pretty hard to escape single life when a couple is performing the Dirty Dancing water scene in front of your lounger.

Apparently, no one put Baby in the corner, just in the bloody sea!

So, burnt, exhausted and coming to terms with the fact that I was now on honeymoon with multiple couples, I got ready for dinner.

Maybe they’ll all be too tired to eat?

As I sat in the Greek restaurant, I observed. I thought I might as well watch considering they are so open with it.

Yes, there were moments of affection. Looks, touches, smiles. But these were crammed in-between feta cheese and staring down at their phones.

Perhaps they’d had enough love for the day?

Will your partner be joining you for dinner?

Day two was no different, but instead of going against it, moving away, I let it come.

I was on honeymoon, after all.

This was now my updated holiday!

The performances carried on and everywhere I turned people reminded me that I was single!

We only have a couple’s massage on offer for you!

Will your partner be joining you for dinner?

This steak is for two people only, would you like an appetiser instead?

Would you like to watch the sunrise tomorrow with your loved one and all the other guests…?

By the final day I’d understood the type of vacation I had signed up for.

It was my own fault.

I’d hastily required a hotel that was a five-star heaven, with restaurants and amenities at my fingertips. I’d wanted nice pools, no kids and a sea on my doorstep.

All the things that you’d also want for a couple’s retreat.

Perhaps, it wasn’t the couples that needed to move, maybe it was me?

I’d say if you can’t beat them, then join them, but I wasn’t interested in a three-way and nor did I fancy the waiters.

In a trip that was never meant to highlight my lack of love, that’s all I could think about.

As the sun came down on the final day, and the couple’s phones lit up their faces over dinner, I realised then that if you are going to go away alone you need to accept that you won’t be.

You will have rom coms played out in front of you. You will endure evenings surrounded by sickening love. And you will need to get used to lip-smacking.

All you can do is watch on. Not in a pervy way. But just let them be.

One day, maybe that will be me.

Until then, I’ll be reading the TripAdvisor before booking and maybe looking out for the solo retreats…

I’ll re-apply my sun cream and know what I signed up for.

Because the reality of being single around couples is this, life can sometimes burn, even with factor 50 protection.

We don’t need a partner, but we might need a different sort of holiday!