It is understood the officers are not from Police Scotland but from forces drafted in from other parts of the UK. 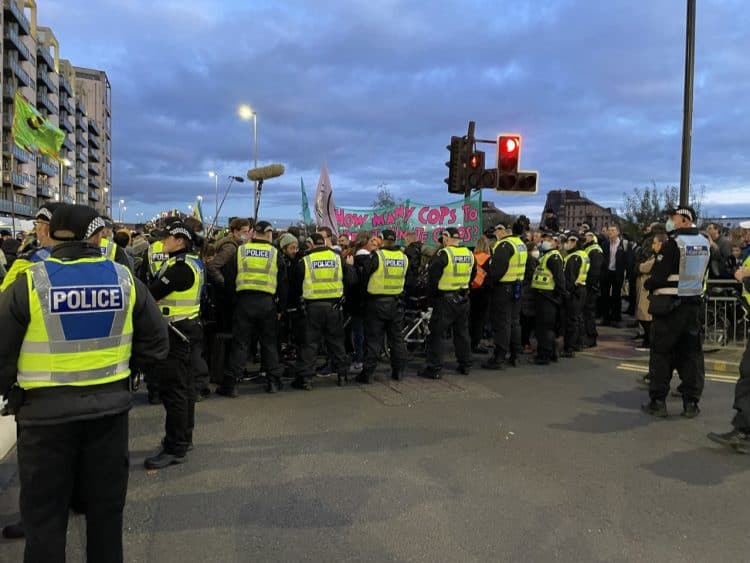 More than 100 police officers on duty at COP26 are awaiting PCR test results or self-isolating amid fears of a covid outbreak.

It is understood the officers are not from Police Scotland but from forces drafted in from other parts of the UK.

Police Scotland cited “operational reasons” for refusing to divulge the number and status of those affected.

However, multiple sources told the Scotsman that as many as 103 are affected.

It has been claimed the officers concerned were given PCR tests and instructed to self-isolate on Monday.

The Scottish Police Federation (SPF) is aware of the situation, but sources within the cop union insist none of its members were affected.

One SPF source said: “These are not our officers or members, but have travelled to Glasgow from elsewhere in the UK to bolster the numbers the chiefs can deploy on any given day throughout the fortnight of COP26.

“You have to be realistic and see it for what it is.

“A hundred or so people from a total of just over 10,000 are taking PCR tests or are waiting for test results.

“The numbers still add up to take on any scenario that arises during the summit.”

The policing operation at COP26, codenamed Operation Urram, Gaelic for respect, is the largest ever staged in Scotland and one of the biggest in the history of UK policing, with 10,000 officers deployed on summit duties each day.

Of that number, 7,000 have been brought in from outside forces

About 45 per cent of the officers have been drawn from the ranks of Police Scotland, with the rest coming from other forces, British Transport Police, the Ministry of Defence and the Civil Nuclear Constabulary.

While Police Scotland would not confirm the number of officers caught up in the Covid scare, well-placed sources maintain that senior commanders are “fully confident” they have the necessary numbers to cope with any situation.

A spokesman for Police Scotland said: “We have a Covid management plan in place.

“However, for operational reasons [we] will not be releasing numbers of those isolating (either awaiting a result, or having had a positive result).”