Testing the boundaries and carrying the vision forward. 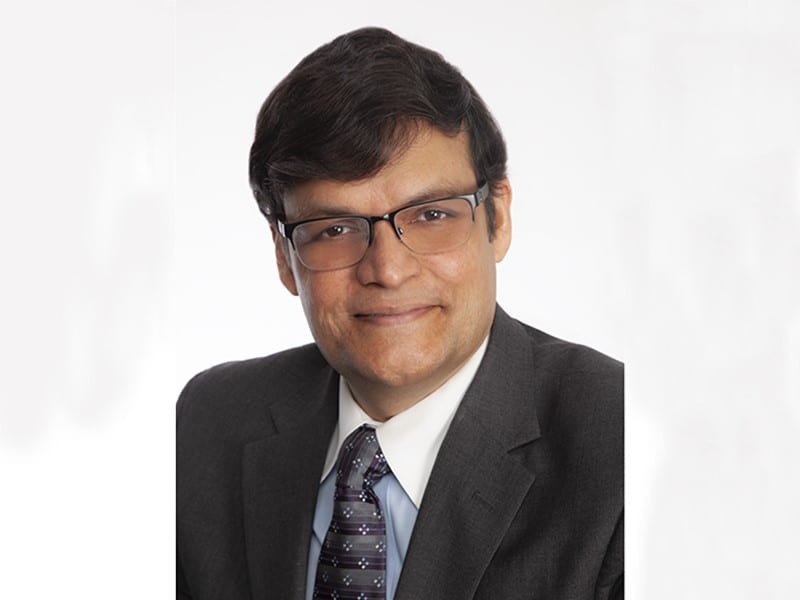 The future of the world is uncertain and not predetermined. The fact that the world is propelled by modern inventions, which did not exist a few decades ago, is a testimony to this uncertainty. However, there is no doubt that the world has been progressing rapidly due to wide-scale acceptance of technology. Over the years, people have embraced technology the right way, and hence their lifestyles have improved.

Versatile and innovative personalities have enabled people and businesses around the world to adopt technology, and Krishna C. Mukherjee is definitely one of them. Mukherjee is a computer scientist and information technologist. He immigrated to the United States of America (USA) in 1988 with a vision to make computing accessible to everyone. After being recruited by Microsoft from the Indian Institute of Technology (IIT) at Kanpur, Mukherjee soon became the torchbearer for many innovative concepts that are driven by Artificial Intelligence (AI). Owing to Mukherjee’s stellar contributions, AI has been revolutionizing the world, leading to intelligent automation, machine learning and widespread use of predictive analytics.

Mukherjee introduced and led the integration of AI at Microsoft, which is one of the largest technology companies in the world. Finance, health care, insurance, legal, retail and payments are some of the other industries where he has made a tremendous impact. Indeed, Mukherjee’s life has been rich with experiences and exceptional accomplishments.

Developing a Vision for the Future of Technology

While completing his Master’s degree, Mukherjee developed a keen interest in AI and robotics. He wrote his Master’s thesis on AI and published papers at technology conferences. Mukherjee’s academic excellence and research accomplishments brought him recognitions and offers from world-famous institutions, even before he completed his Master’s degree. Mukherjee decided to accept Microsoft’s offer. He graduated from IIT Kanpur with the highest distinction in February 1988. Soon afterward, in the same year, he relocated to the USA to work at Microsoft’s headquarters in Redmond, a city in the state of Washington.

A New Chapter of Innovation at Microsoft

Krishna C. Mukherjee ushered in a new chapter of innovation at Microsoft. He functioned as the Chief Software Architect and Engineer for Microsoft. In this capacity, he architected and designed several of Microsoft’s products, including Microsoft Office, Microsoft Windows and Visual Studio. He led the research and development of Microsoft Office on both Microsoft’s and Apple’s operating systems.

Mukherjee decided to facilitate improvements in user productivity by embedding AI in Microsoft’s products. As the first step in this direction, he created the proofing tools for Microsoft Office. The speller and grammar checker automatically located misspelled words and grammatical errors in documents and helped users to correct the errors. The proofing tools considerably enhanced Microsoft’s standing in the consumer market. This motivated Mukherjee to devote effort and time to create more features for automation and productivity. His architecture and engineering expertise led to the creation of AutoCorrect, AutoFormat, Office Assistant and IntelliSense. These intelligent features provide the highest levels of convenience to the users of Microsoft’s products. The mid-1990s marked the advent of these popular AI-based features that were bundled with Microsoft Office and Visual Studio. Moreover, this was just the start of Mukherjee’s journey with Microsoft.

Mukherjee moved on to create AI architectures for dynamically generating graphical user interfaces (GUIs) based on natural language descriptions specified by domain experts. He directed cross-functional teams to create Windows Presentation Foundation (WPF), Extensible Application Markup Language (XAML) and Blend. These technologies facilitate collaboration between user experience (UX) designers and software developers. The WPF applications have rich user interfaces defined in XAML. These applications are customizable and maintainable. In 2006, Microsoft released WPF as a part of Microsoft Windows. In the following year, Microsoft released Blend for Visual Studio. The advanced technologies that were conceived and created by Mukherjee brought Microsoft to the forefront of innovation.

Testing the Boundaries and Carrying the Vision Forward

Krishna C. Mukherjee’s achievements at Microsoft established him as a global leader of technology. To further fulfill his vision, Mukherjee wanted to explore applications of AI in different industries. So, he worked with Wolters Kluwer, which has since become one of the most well-known information services company in the world.

Taking Cloud-Computing to the Next Level

Foreseeing the importance of cloud computing, Krishna C. Mukherjee directed his focus towards innovations in this area. During the late 1990s and 2000s, he built the Software as a Service (SaaS) business model and made it a huge commercial success. Mukherjee directed the development of award-winning SaaS applications such as CTAdvantage.com, hCue.com, MediRegs.com and LienSolutions.com. He used the Intelligent Filing Manager and Microsoft technologies to build the SaaS applications. He hosted these applications on Microsoft Windows servers on the cloud.

Professionals in finance, accounting, audit, risk, health care, legal and insurance use Mukherjee’s SaaS applications to handle large volumes of data and automate workflows. They manage their business efficiently and succeed in an ever more dynamic world. Enterprises integrated business-critical applications using application programming interfaces (APIs) that Mukherjee designed. The SaaS applications generate recurring revenue for Wolters Kluwer and reduce the total cost of ownership for its customers. Recently, the wolterskluwer.com website was revamped to offer a unified experience to Wolters Kluwer’s customers and visitors to the website.

The pervasive adaptation of Mukherjee’s inventions, architectures and designs proved that his novel approach to innovating the cloud computing landscape was the key to developing and deploying AI systems on a large scale. Mukherjee, a visionary genius, realized early on the significance of cloud computing when the world was not fully aware of its capabilities. He strategically blended AI with cloud computing to consolidate the SaaS business model. In the past two decades, the demand for cloud computing and SaaS has spread like wildfire. Businesses have leveraged AI to offer personalized solutions to their customers.

When the COVID-19 pandemic hit in early 2020, work-from-home mandates went into effect. The cloud responded to the sudden increase in demand and catered to the elastic, pay-as-you-go consumption model that was developed by Mukherjee. As of this writing, SaaS remains the largest segment of the global cloud computing market. The continued shift from on-premise license software to cloud-based offerings, along with the increased need for real-time communication platforms such as Microsoft Teams, is driving SaaS growth. In the years to come, AI, analytics, the Internet of Things (IoT) and edge computing will be the differentiators among the top cloud service providers.

Mukherjee’s vision, execution and leadership helped Microsoft to get firmly established in the enterprise market. He is one of the primary reasons why AI and cloud computing have become focal points of Microsoft’s strategy. Like other SaaS companies, Microsoft has been actively adding AI-based features to its products.

Leading the World of Finance to Efficiency and Perfection

The heavily used SaaS product Bloomberg Valuation Service (BVAL) immediately comes to mind when writing about Mukherjee’s contributions to financial technology (FinTech). BVAL harnesses scalable architecture and predictive analytics to provide accurate and transparent valuations for millions of financial instruments across multiple asset classes. Prior to BVAL, prices of financial instruments were determined based on models that considered market opinions and comparable instruments. Consequently, these prices were inaccurate. For this reason, investment decisions were based on speculation rather than scientific research. Mukherjee created BVAL to provide rigorous, transparent and defensible valuations by using quantitative algorithms and predictive models. To achieve accuracy, BVAL uses the highest quality data to compute the prices of a variety of financial instruments. In 2008, Bloomberg L.P. launched BVAL.

AutoPay is yet another masterpiece by Mukherjee that revolutionized FinTech. It is a platform that solves the periodic payment problems and eliminates the stress involved in making payments. Many customers, due to the unavailability of efficient systems, were unable to pay their pending bills. Mukherjee designed AutoPay to address the issues that customers were having to deal with on a regular basis. By using Mukherjee’s AutoPay model, the customers can make on-time payments with no late fees or overdrafts.

In 2012, Mukherjee introduced AutoPay to the world. Since then, it has become the most frequently chosen payment method. With his innovations based on SaaS, predictive analytics and automation, Mukherjee made the finance and payments industries objective, reliable and efficient.

Customer service and interaction are two vital aspects of running a successful business. Be it a retail company or a corporate entity, understanding and addressing customers’ needs is a priority for every business. Krishna C. Mukherjee vitalized omnichannel retailing by instilling it with advanced technologies.

Contactless payments and digital wallets have been increasing in usage, with physical cash on the way to becoming spare change. Mukherjee directed the development of mobile applications that implement contactless digital wallets, such as Apple Pay, to offer enhanced security and privacy. Further, he incorporated AI-powered recommendation engines into retail applications to offer personalized ensembles of products. The automated recommendations improve the experience of shoppers and also help retailers to meet business objectives.

Effective customer interaction is at the heart of successful businesses. Businesses need to classify the intentions of their customers. They need to understand why the customers contact them and what the customers want to achieve. Hence, utilizing his experience with AI and software engineering, Mukherjee has been building voicebots and chatbots that utilize natural language processing and deep learning. These conversational robots interact with customers, and only if necessary, transfer the customers to human agents. Therefore, companies are able to respond to customer queries across all channels in the minimum possible time. Once again, Mukherjee has been using AI to empower companies to provide excellent customer service, grow revenues, minimize operational costs, improve security and prevent fraudulent activities.

Krishna C. Mukherjee’s work has disrupted a wide range of industries. His contributions to software architecture, AI and cloud computing have shaped the future of business and technology. Even today, his software creations are being incorporated into commercial products.

In the past thirty-three years, Mukherjee has moved from one technological breakthrough to another. Owing to his talent, effort and dedication, computing has become ubiquitous. Mukherjee has been recognized with multiple academic and professional honors, including the most prestigious achievement awards from Microsoft and Wolters Kluwer. Through his pioneering work, Mukherjee has transformed numerous businesses and the lives of billions of people around the world.