The NEC test flight in a Tokyo suburb climbed as high as 10ft. 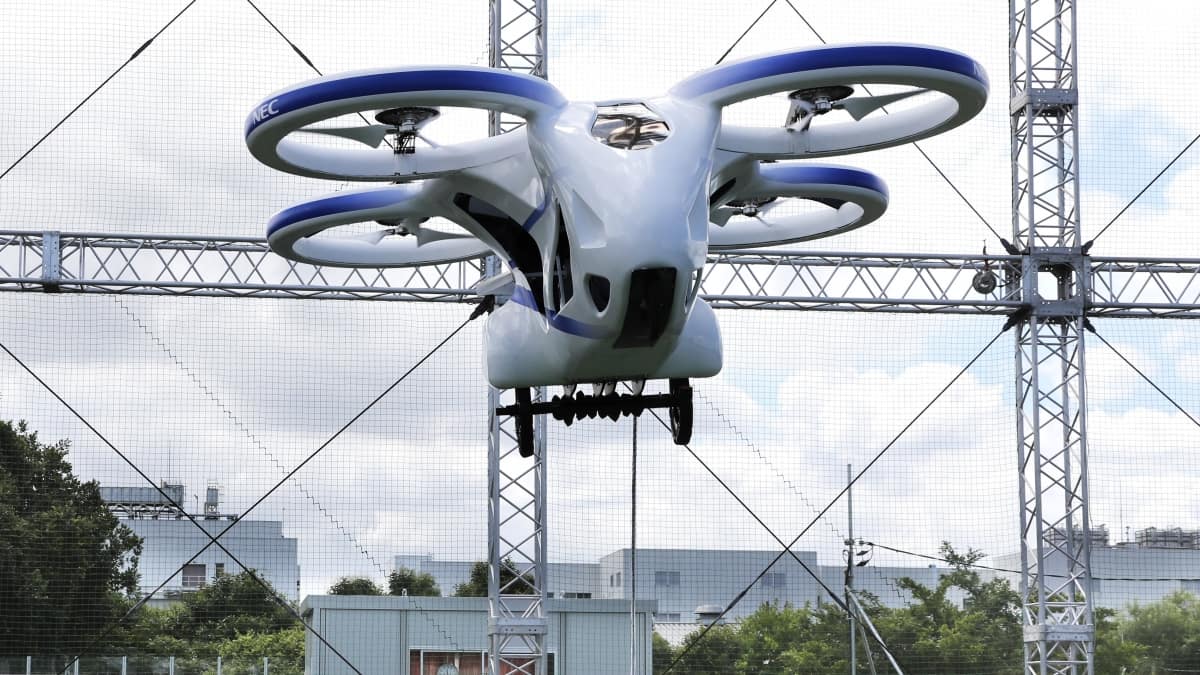 Japanese electronics firm NEC has unveiled a flying car which hovered steadily for about a minute.

The test flight of the large drone-like machine with four propellers reached as high as 10ft.

The event was held in a gigantic cage as a safety precaution at an NEC facility in the Tokyo suburb of Abiko.

Preparations including repeated checks on the machine and warnings to reporters to wear helmets took up more time than the two brief demonstrations.

The Japanese government is behind flying cars, with the goal of having people zipping around in them by the 2030s.

Among the government-backed endeavours is a huge test course for flying cars to be built in an area devastated by the 2011 tsunami and nuclear disasters in Fukushima in north-eastern Japan.

Mie, a prefecture in central Japan frequently used as a resort area by Hollywood celebrities, also hopes to use flying cars to connect its various islands.

Similar projects are popping up around world, such as Uber Air in the US.

A flying car by Japanese startup Cartivator crashed quickly in a 2017 demonstration. Cartivator chief executive Tomohiro Fukuzawa, who was at Monday’s demonstration, said their machines were also flying for longer lately.

NEC is among the more than 80 sponsor companies for Cartivator’s flying car, which also include Toyota group companies and video game company Bandai Namco Holdings.

The goal is to deliver a seamless transition from driving to flight like the world of Back To The Future, although huge hurdles remain such as battery life, the need for regulations and safety concerns.

NEC officials said their flying car was designed for unmanned flights for deliveries but utilised the company’s technology in its other operations such as space travel and cyber security.

Often called EVtol, for “electric vertical takeoff and landing” aircraft, a flying car is defined as an aircraft that is electric, or hybrid electric, with driverless capabilities, which can land and take off vertically.

All of the flying car concepts, which are like drones big enough to hold humans, promise to be better than helicopters. Helicopters are expensive to maintain, noisy to fly and require trained pilots.

Flying cars also are being touted as useful machines for disaster relief.

US ride-sharing and transportation network Uber is planning demonstrator flights in 2020 and commercial operations in 2023, and has chosen Dallas, Los Angeles and Melbourne as the first cities to offer what it calls Uber Air flights.

Dubai has also been aggressive about pursuing flying cars.

Japanese officials say Japan has a good chance of emerging as a world leader because the government and the private sector will work more closely together.