The Audi RS3 is the enfant terrible of the range, always willing to enter a scrap and bloody a few noses. It’s a car you can’t help but like. 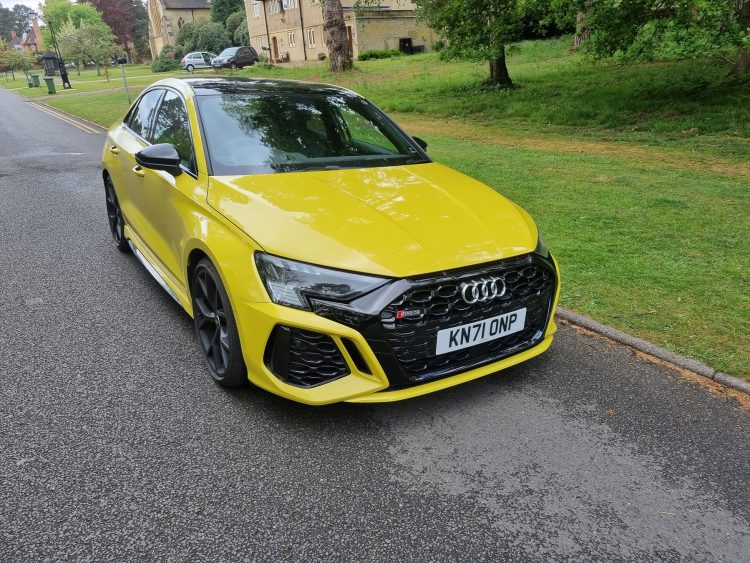 People always complain about things getting smaller. The Big Mac is a prime example. It’s just not the size it once was. Apparently. Chocolate bars have also deflated in size whilst their prices have inflated. Is it a conspiracy theory, or are we actually being ripped off? The opposite trend is true in the automotive world, where cars have got larger. A lot larger. I was minded of this when reviewing the latest Audi RS3. It must be one of the biggest small cars in the world.

The hyper hatch has a lot to live up to, except the model tested isn’t a hatch back at all. It’s a saloon. You can’t call a saloon car a hot hatch, so how do you classify it? It’s not quite a super saloon in the way of its elder brother, the Audi RS5. Does it then fall into a bit of a grey area?

It also appears oddly proportioned on first viewing. The black wheels contrast vividly with the python yellow paintwork and it looks a bit squashed. I did come to rather admire its aesthetics, however, even that paint job. If you’re going to get an Audi RS3, why not go all out? It’s not a subtle car, so why bother with a subtle colour? It would be like getting a Pitbull and calling it Henry. You’re legally obliged to call it Tyson or Lennox, or the name of some other well-known hard man. The Audi RS3 should only be available in aggressive colours, too.

Another sure-fire sign that cars have got to be very large indeed is their wheels. The Audi RS3 as tested here is fitted with 19” wheels. I can remember a time when 17” wheels were considered enormous. Now, you see 19s and wonder if the manufacturer has played the size down a bit. They fill the wheel arches of the Audi RS3 just about perfectly, though.

Python yellow, sports exhaust, blacked out windows… The Audi RS3 receives a lot of attention. But is it everything you’d want it to be?

First things first, the Audi RS3 is incredibly keen. No matter what setting you have it in, efficiency, comfort or dynamic, it’s always eager to surge forward. It’s like a wild pig that’s been disturbed in the woods – idling about its business quietly and calmly, before you break the peace with a minor prod of the throttle and all hell breaks loose and it charges around squealing. It positively bursts into life and takes a few goes to get the hang of. When sitting on the parking brake, the gentlest of inputs is needed to slowly advance in traffic, lest you want to find yourself sitting on the lap of the poor driver in front of you.

Powered by a 2.5-litre in-line five cylinder engine that produces 400hp, the Audi RS3 does 0-60mph in just 3.8secs. The quattro all-wheel drive helps to this end, although all power can be sent rearwards should you wish to drift. I didn’t, so four-wheel drive was the setting for me.

It’s definitely the noisy little brother of Audi’s RS range. Where the Audi RS5 is more of a junior GT and the RS6, RS7 and RSQ8 offer more effortless progression via their 4.0-litre twin-turbo V8 unit, the RS3 is more of a hellraiser. It’s not as composed as it’s stablemates, which gives it a distinct character. Where the RS5 was forever glued to the road, the RS3 is far more willing to step out of line.

It’s a little looser on the edge and feels more engaging for it. Whether that’s a positive or not depends on your preference for effortless power delivery versus a spot of hooliganism.

It’s always lively, but it can be tamed. You get used to its chirpy aggression and constant straining at the leash. If you’re the sort who names your car, you’ll definitely be looking at something like Reggie or Ronnie for this one.

In saloon guise, the Audi RS3 is surprisingly practical. We managed a family trip to Costco in it, complete with two children and enough food to see us through the summer. I was shaking my head in dismay at my wife as she kept on loading up the trolley, but to my great surprise we managed to get it all home without making any tricky decisions about whether to leave the wine or one of the kids behind.

Around town, you do notice how stiff it is, but there’s nothing you wouldn’t expect of a car of these pretences. The adaptive suspension with drive select is probably a must-have option, though. When you’re out on the open road, toggling between your individual RS modes, the stiffer suspension comes into its own. Hit a speed bump, however, and you soon remember that you forgot to select comfort again.

The cabin itself is well appointed and spacious. The sport seats provide enough support and the Audi MMI interface is incredibly easy to use. The launch edition features a panoramic roof which brings more light and fresh air, whilst the Bang & Olufsen stereo brings a good audio setup to the car.

The interior upfront isn’t dissimilar to the EV architecture found in the Audi Q4 sportback e-tron. It’s minimalist by design, with clear screens which are easy to interact with. A head up display is handy for reminding yourself of the speed you’re carrying. It’s a comfortable environment, although unsurprisingly not as plush as the Audi RS5.

The Audi RS3 is a difficult car to dislike. It has its own distinct character within the Audi range and that’s no bad thing. It’s lively and enthusiastic, unafraid to ruffle a few feathers. It’s also blindingly fast. The quattro system helps in propelling it forever forwards, yet it also steps out of line in a way considered uncouth further up the range. In that respect, it is more like the Alfa Romeo Giulia Quadrifoglio than the Audi RS5, its on-paper direct rival.

I even made sense of it in saloon guise. Initially unsure what the purpose of the saloon version of a hatchback was, that uncertainty swiftly became an irrelevance. As did all my other concerns. I warmed to the looks, the colour, the proportions, the character; everything.

If you’re looking for a livewire family saloon, the Audi RS3 ticks an awful lot of boxes. It lacks the refinement of other saloons at a similar price point (£61,460 as tested), but this is clearly in the pursuit of performance. It’s a deal you know you’re entering – just look at it, it’s not trying to be something it’s not.

The Audi RS3 drew a surprising amount of attention. I got more questions about it than I’ve had about a lot of the other cars we’ve reviewed at The London Economic. It stands out in a positive way (other colours are available if python yellow ain’t your bag) and I, like a lot of others, seemingly, was drawn in by the cartoonish appeal. It’s a lairy hatchback at heart. Such cars should encourage you to channel your inner boy/girl racer and seek the long way home via a decent B-road. If nothing else, the Audi RS3 absolutely achieves this goal.