The Audi RS5 is designed to deliver on multiple fronts. We find out how well it matches up to its brief as a super saloon and family wagon 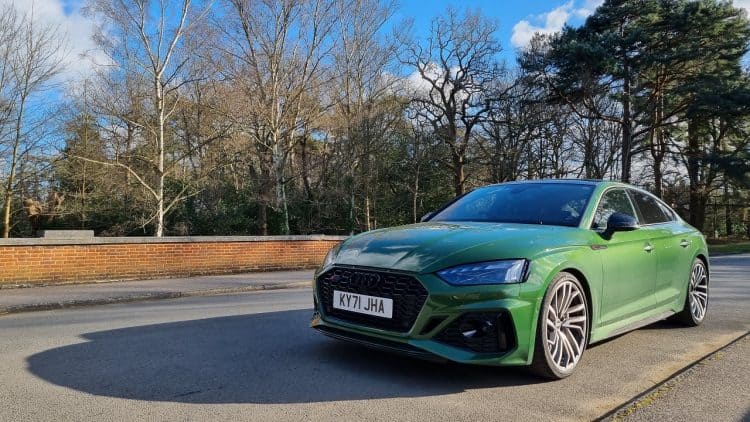 The Audi RS5 is Audi’s somewhat understated super saloon. Understated is, of course, a relative term up against its stablemates. It doesn’t have the machismo of the RS6, the presence of the RS7 or the largesse of the RSQ8. It also doesn’t have their 4.0-litre twin-turbo V8 engine. That almost makes it sound subtle, doesn’t it? Fitted with a 2.9-litre twin-turbo V6, the Audi RS5 is perhaps closest in its DNA to the original Audi Quattro concept in terms of looks and stature. It’s surprisingly fast in a straight line and has traction that only a lunatic could break. Yet, there’s also all the convenience one would expect. So, is the Audi RS5 all things to all drivers?

As a starting point, the numbers don’t disappoint. 450hp and 600Nm of torque. 0-62mph takes a mere 3.9secs. The Vorsprung model as tested comes fully equipped. The interior is well appointed and easy to navigate. The boot has plenty of space. It has massage seats. There’s a sunroof.

It also looks the part. The Sonoma green paintwork looks great, even if it did split opinion. Someone quite reasonably commented that it’s not the sort of colour you’d go for without first seeing it on a car. But it looks fantastic (in my opinion, of course…). The flared wheel arches are filled nicely by the 20” wheels. Even at night, with the matrix LED headlights in operation, the Audi RS5 offers an aggressive gait.

Looks, however, can be deceiving. A week with the Audi RS5 would reveal all, with a healthy mix of commuting, B-road bashing and a day trip to Leeds.

It’s an incredibly easy car to get to grips with. There’s nothing intimidating about it. You can quietly waft around town without bringing too much attention upon yourself. It only gets animated when you really prod it.

From the driver’s seat, the sports seats are adjustable to your required angles and will offer a soothing massage to beat the traffic jam blues. Audi’s MMI virtual cockpit and infotainment system are easy to get to grips with. For fans of physical buttons, the Audi A5 models have those for the HVAC. The dual touchscreen set up arrives from A6 onwards.

In the Comfort drive mode, everything is perfectly amenable. In truth, it remains so in Dynamic, too. The exhaust emits a pleasant burble and the acceleration is savage, but the Audi RS5 never gets too rowdy on you. It’s far too clever for that.

Equipped with all the torque vectoring technology you’d expect of a modern car, the RS5 just sits there and takes everything you can throw it. The Quattro drive system offers unimaginable traction and you really don’t need to be an exceptional driver to make very swift progress indeed. The safety nets are there to catch even the most egregious of errors.

Which makes the Audi RS5 incredibly easy to live with. You can happily ferry the family around safe in the knowledge that everyone will be, well, safe. It’s also cavernous and comfortable inside. The suspension can wallow at times, but it handles speedbumps and potholes with consummate ease.

You are aware that the Audi RS5 has been supremely engineered, but does that detract from the playfulness of the car? This undoubtedly comes down to personal preference. There’s a lot to be said for being safe. I’m not a racing driver, so safety is a useful feature. And it doesn’t exactly make the RS5 boring.

Pin the throttle mid corner and you can feel the systems in play. Power shifts to the outside rear wheel, the car waiting to regain its balance before shooting you out again. There’s just an astonishing level of grip, too. For an average driver (like me), the car is better at being a car than I am at being a driver.

Marry that to supreme straight-line speed and the Audi RS5 is a compelling proposition. If you prefer a loose rear end, the Alfa Romeo Giulia Quadrifoglio is a RWD take on the V6 powered family super saloon. If you prefer a safety net, then the Audi is the choice. Do you fancy yourself as a power sliding race driver, or do you accept your limitations? I guess we all like to fantasise.

The Quattro and associated gadgetry also make the performance inherent in the Audi RS5 consistently exploitable. It never gets out of shape and puts its performance down every time.

The only grumble is with the time it takes to get going. When sailing along, you spot an overtake opportunity, pin the throttle and… wait for a couple of seconds whilst it sorts itself out. You’re better off in manual mode to take control, but the flappy paddles are apologetic across the Audi range. They don’t encourage you to use them, being hidden away behind the steering wheel. Too modest by far, you forget they’re even there.

Perhaps where the RS5 is at its best, however, is in more of a GT capacity. A day trip to Leeds and back, covering 450 miles, revealed a supremely smooth and effortless car. With luxury trimmings and more power than you shake a stick at, the Audi RS5 positively ate up the M40 and M1. It’s quiet, relaxed and refined at cruising speeds with an unfussy ride.

This made it excellent for commuting, too. Stop/start traffic jam assist with the adaptive cruise control means you can rest your feet, and it recognises and works with speed limits, too. Throw in the head up display, and it’s a comfortable environment to be in. The head up display is doubly useful on the motorway; so smooth is the RS5 that you’re not always entirely in tune with how fast you’re going. A reminder is no bad thing.

Other useful features such as self-parking are also available. There’s plenty of space in the Audi RS5, too. Buggies and baby seats are easily accommodated. You won’t struggle to get your bits and pieces in here.

In fact, a lot of the time you could quite easily forget that you’re driving a 450hp super saloon.

But, you know, you’re still driving a 450hp super saloon. Given the right conditions, the Audi RS5 comes to life. Some reviews have suggested that the exhaust note could be a bit more sonorous. Without driving it back to back with something else, however, I’m unsure that you’d have much cause for complaint.

In fact, there’s not much cause for complaint full stop. This is a car that will tick every box for you. It’s plenty fast enough when you need it to be, yet also practical and approachable. For everyday use, the Audi RS5 slots seamlessly in. It could really be considered more of a GT, such is the way it makes effortlessly serene progress. Once you start to view it through that prism, it starts to make more sense.

Quietly brilliant, it’s typically German. It’s not a car that gets lively on the edge, it just sticks to its purpose. It’s not as emotionally involving as something like the Alfa, but it is eminently more usable. For everyday use, it’s probably the one to go for. We do like to romanticise our cars though, and that’s what the Audi RS5 is up against. Expect pulse-raising thrills and power slides – it will disappoint. Embrace its softer edges and reassuring demeanour – it’s a brilliant car. So, what are you looking for?