A supercar slaying family saloon sounds great on paper, but what’s the Audi RS7 like out in the real world? 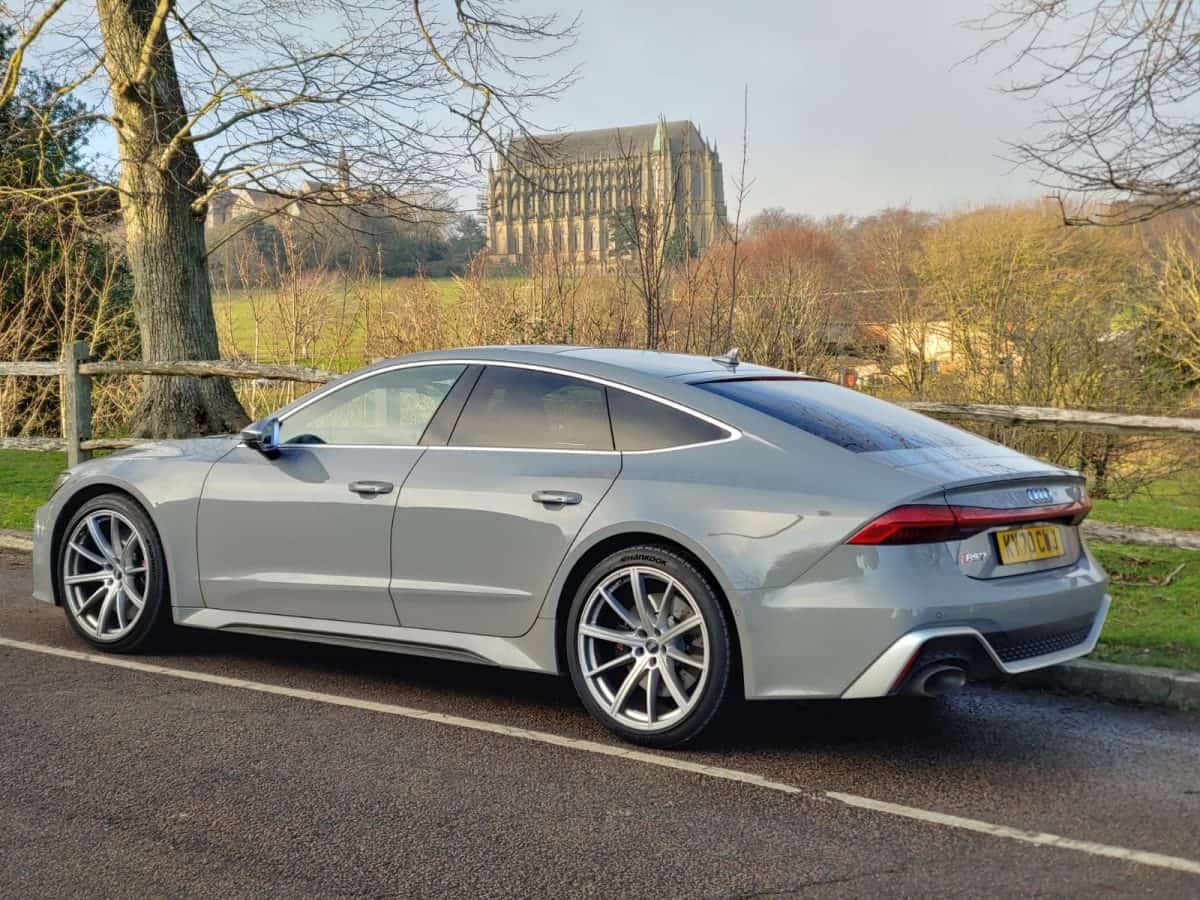 I keep hearing stories about people being stopped out and about during this third lockdown. There were those two women who were swarmed by police in Derbyshire for drinking a coffee (a coffee!) outside and other tales of people being pulled over in their cars and having their journeys pried into by our law enforcers. But then when I’ve been taking my permitted once daily perambulation around the neighbourhood, the roads seem scarcely any quieter than usual; the hustle and bustle of everyday life is still there.

Obviously, there are exemptions. So, some journeys are justified. But all of them? I found myself going over my cover story ahead of this review, just in case. Of course, I needn’t have bothered, but these are strange times eliciting strange behaviours. Too much time indoors, perhaps, but imaginary nervy conversations were taking place with police officers in my head.

After all, you can’t review a car from home. You need to take it out, open it up and see what it’s got.

Sitting atop the practical Audi supercar slaying range are the RS6, RS7 and RSQ8. The RS6 is Audi’s legendary estate, the sort of car that makes you wonder why SUVs are so popular. Not to miss out on that surge in popularity for the SUV, however, Audi cobbled together the RSQ8. The RS7, as tested here, sits between the two as Audi’s super-saloon offering.

Equipped with Audi’s tubthumping 4.0 twin-turbo charged V8 engine, the RS7 kicks out 591bhp and produces 800Nm of torque. With a stated 0-60 time of 3.6secs, you could easily be lulled into thinking that this car is an outright savage.

And you’d be right. Sort of. You get an immediate hint of what’s to come upon pressing the start button; a wonderful exhaust note rumbles through the car as the V8 growls into action. You’d be quite entertained just turning this thing on and off again.

Once put into dynamic setting and you’ve pressed the RS button that sits on the steering wheel, this car is like a Rottweiler straining to be freed from the leash. The throttle becomes highly responsive, the ride firms and the suspension lowers itself. The exhaust notes resonate with more intensity through the cabin and there’s a great sense of theatre.

Yet, select comfort mode and a couple of valves are shut off in the exhaust, the ride softens and the suspension raises itself, making it an amenable car to drive around town. It tackles speed bumps and uneven surfaces with aplomb, although you will need to adjust the settings accordingly. Driving around with the RS7 in its most aggressive guise is a bit of a sensory overload if there’s no possibility of setting it free.

The interior is well appointed. The infotainment system is easy to use and, thankfully, the voice command function works well. I say thankfully because there’s no keypad for entering your destination into the satnav, rather you have to use the second touchscreen which is usually for the climate control to write the letters into the touchpad. I’m not one of the 10% of people in this world who is left-handed.

Both touchscreens work well, though. Rather than being an outright touch operation, you have to press down on the screen to action commands, with haptic feedback letting you know when the job is done. Others have found these functions distracting, but I didn’t find myself spending anymore time with my gaze averted from the road ahead than I do with a traditional button arrangement.

There’s plenty of room in here. The cabin is spacious, although the sheer size of the gearbox means there’s a little less room for your left leg than you might otherwise expect. First world problems, huh?

In the back, Isofix makes getting kids in and out very easy, with enough room to comfortably accommodate three adults. A long journey in the back would be no problem at all. The sloping roofline does pinch a bit of headroom if you’re transporting a giant, but otherwise it’s all good.

The boot is large enough to accommodate four adults going away for a long weekend, or your weekly shop, or your golf clubs and cricket bags.

One downside to the RS7 is that you’re likely to spend a lot of time at the petrol station. This thing enjoys a drop of petrol in the same way I’m going to enjoy a drop of beer once this wretched dry January is over. There is a 48V mild hybrid system which enables the car to coast above 35mph, but it’s a bit like bringing a sword to a gunfight.

I found that I could eek improved mpg out of it by putting it in efficiency mode and cruising at 70mph on longer journeys, but let’s get serious for a second here, you’re not buying an RS7 to cruise around in efficiency mode. That’d be like buying artwork and displaying it in your loft.

The fuel consumption is a necessary compromise for the RS7. If you want the performance it offers, you have to take the rough with the smooth.

I tried to give the RS7 an outing in several conditions. It handled a trip to the supermarket easily; it handled a trip to Shoreham-on-Sea easily. It was only on tight, twisting country lanes that you come to realise just how big this car is. It’s incredibly wide, with the view from the left wing mirror being grass verge and the view from the right being white lines zipping just by the tyres.

Out on the motorway and A roads, the RS7 gobbled up the miles. The ride was smooth and the double-glazed windows kept the cabin quiet. At cruising speed there’s little noise disturbance to trouble you. In such situations, resisting the temptation to press the RS button is your greatest concern. That button really is, to coin a phrase from Bricktop in Snatch, like hot chips to a pisshead.

Engaging RS on the sweeping roads of the south coast was a joy. Yet this car is equally adept at carrying you quietly home. It would doubtless be tremendous track day runner, with RS2 disengaging the traction control for full lunacy mode. Yeah, I didn’t use that function at all!

The only note of irritation in the drive is the RS7’s lane departure assistance system. It’s intrusive to the point of being dangerous and I couldn’t work out how to turn it off. Having consulted the manual, I’m not sure you can.

The car’s steering is responsive and agile enough to encourage a softer grip of the steering wheel and this is generally a confidence inspiring car, so it comes as an alarming surprise when you look to take a more aggressive line through a sweeping bend, only for the car to throw you back to the left, knocking you off your line and closer to the verge. In a car this wide, you need the margin for error. Instead, then, you find yourself gripping the wheel as tightly as you can, ready to wrestle to hold your intended line.

All in all, the RS7 ticks every box. It’s practical. It’s comfortable. It’s good looking. And yes, it’s lightening fast. It has several cool touches, not least the LED headlights which flicker with precision out on the road around other cars, but which also give a little display when you unlock the car.

Ultimately, you’d expect any Audi in the RS range to deliver an enjoyable driving experience and, on this front, the RS7 comprehensively delivers. The model tested came with the optional sports exhaust and if you’re looking at getting one of these, I oblige you to tick that box. It’s worth it.

Not without its foibles, the overall package is a thoroughly engaging one and the split personality of the RS7 makes it a suitable drive for anyone. Once you’ve driven this car, you want to drive it again. And again. It delivers on its brief in spades.