The Audi Q4 sportback e-tron continues Audi's EV roll out with style and practicality. We find out what it's like. 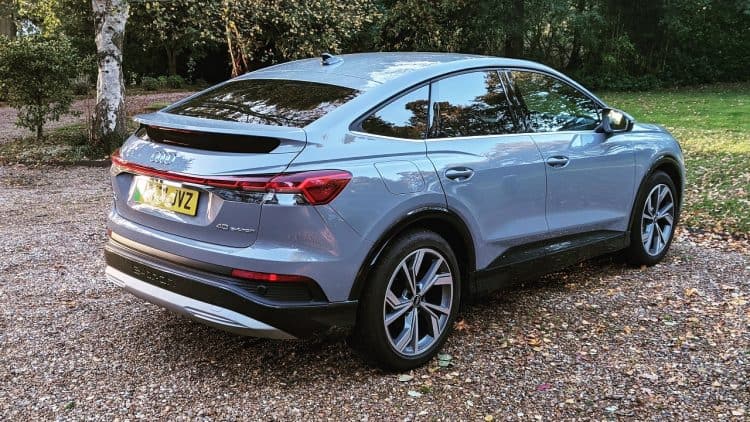 Electric vehicles are getting better. Which is just as well, because they’re here to stay, at least in the short to medium term future. While the combustion engine enjoys its swansong, manufacturers are rapidly turning their attention to the future. Audi is one such manufacturer, committing to full electrification of its fleet. This is a great shame to anyone who lusts after an Audi RS6, but is a great opportunity to anyone who wants a slice of the future today. The Audi Q4 sportback e-tron is a major step in the right direction. And you can still get an RS6 for the time being.

Range anxiety seems to dominate the conversation around EVs, but things are getting better and getting better quickly. The Q4 sportback e-tron has a claimed range of 316-miles. Now, it won’t actually do that, but you’ll easily get 250 miles in this thing, which assuages fears for even the longer journeys you’re likely to undertake.

What’s the Audi Q4 sportback e-tron like as a car?

Away from range anxiety and the debate about whether the UK’s public charging network is fit for purpose, we must judge the Audi Q4 sportback e-tron as a car. And you know what? It’s really rather good. I’ve long been perplexed by coupe styling on SUVs and crossovers. Why pinch head room and boot space on what’s supposed to be a spacious, practical car? I was expecting rear head room to be cramped and the boot to be awkwardly shaped.

Audi, however, have managed to arrange things so that doesn’t happen. My brother is 6ft 7” and he had enough head room in the rear. I don’t know how they’ve done it. I was fortunate enough to be driven in it for the car’s launch and it was perfectly comfortable as a passenger. The boot, too, accommodated all the stuff I need to lug around with my new born son; pram, wheels, changes of clothes etc. It all went in easily enough.

The cabin is well judged. The central touchscreen is typically Audi and typically easy to use. Then there are physical buttons for your HVAC. It also has, quite possibly, the fastest heating seats in any car. Press the button and you’ll be warm in no time.

There is plenty of storage space in the cabin, too. Everything is logically positioned and the whole car is incredibly easy to use. Hop in, foot on the brake, select D and you can be moving within two seconds of opening the door. The driver display features are again very straightforward and the head up display with augmented reality works superbly. It’s clear without being intrusive. So far, so good.

What’s the Audi Q4 sportback e-tron like to drive?

The simplicity is carried over into the driving experience. Whilst this is rather a big car, it never feels like a big car. It’s a crossover that never looks like a crossover. The steering is featherlight and reversing cameras and sensors make parking as easy as it could be.

The ride quality is exceptional. The Audi Q4 sportback e-tron glides above the surface of the road and deals with potholes and speedbumps with aplomb. From a family, everyday use perspective, there’s nothing to fault.

So, what is there to fault then? Well, it could be a bit faster. 0-60 in the Audi Q4 sportback e-tron 40 Sport, as tested, takes over eight seconds. In 50 guise, this is reduced to 6.8 seconds. Performance, thrills and spills, categorically, are not the name of the game.

It would have been nice to have a bit more grunt in the Audi Q4 sportback e-tron, however, if only because there’s plenty of traction to work with. You get the instant delivery of all its power upon stamping on the accelerator, but it plateaus a little too quickly. You can thread it along a decent B-road and it’s actually quite enjoyable. It just leaves you wanting a little more.

Not everyone wants to drive like a lunatic though!

Absolutely, and if you’re not bothered by traffic light races and storming down your favourite B-road (and I know plenty of you aren’t), the Audi Q4 sportback e-tron is going to tick an awful lot of boxes. It’s very easy to get hung up on performance, but the reality is speed cameras and traffic jams. The Audi Q4 sportback e-tron covers off every other scenario. It’s a very relaxed, very refined car. It’s almost mindful in the way it transports you around.

On the commute to work, it was great. Nice and quiet. Decent stereo. Comfortable. It doesn’t have the jerking one-pedal driving that some EVs have. Rather, Audi prefers a progressive regenerative braking model that you can adjust via the paddles behind the steering wheel. It takes a little getting used to as it doesn’t always keep your settings. When lifting off, the regenerative response is based upon your current speed, the speed limit zone you’re in and how close you are to the car in front. It’s almost too clever for its own good but makes sense once you’ve worked it out.

For family and everyday use, it’s a perfect companion. The only drawback is your ability to charge it. If you have a drive and can install a charging point domestically, then getting an EV is a realistic option right now. If you can’t, there’s no getting away from the fact that putting petrol in is still infinitely more convenient.

Given the rise in EV sales, doubtless fuelled by their inevitability, Audi anticipates the Q4 e-tron becoming its second biggest selling car. The A3 is number one, if you’re wondering. Other marques have seen this, too, so the direction of travel is clear: people want EVs.

In a car like the Audi Q4 sportback e-tron, it’s easy to see why. The sportback version will account for 17% of Q4 e-tron sales. With it’s sleeker looks, I wouldn’t be surprised if that number creeps up a little. It looks good and still somehow provides ample internal storage space.

It’s well thought out, well laid out and well executed. There’s nothing wacky about it and it’s a smooth extension of the Audi range. I drew a similar conclusion with the Audi e-tron S. These cars are well suited to electrification. They work as, well, cars. No gimmicks, just a battery instead of an engine.

So, if you’re looking for an everyday family car that you plugin rather than refuel, the Audi Q4 sportback e-tron won’t disappoint.