A teenage boy is hoping to become the first ever professional footballer – with cystic fibrosis. Talented goalie Morgan Coxhead, 14, has been heralded as a future star between the sticks who has already visited the England senior squad for training. The teen is now desperate to break down the boundaries by becoming the first […] 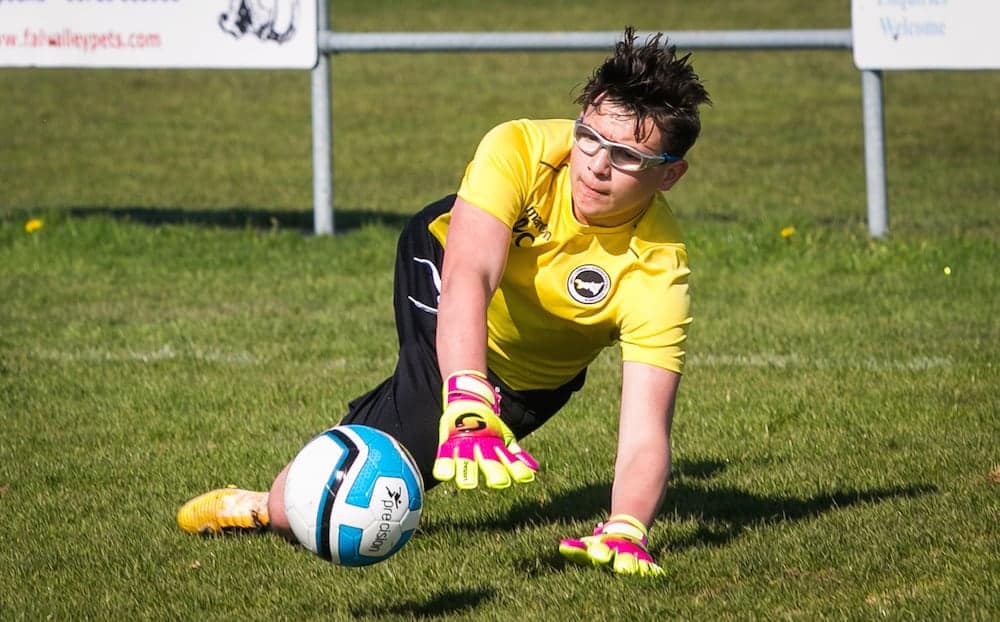 A teenage boy is hoping to become the first ever professional footballer – with cystic fibrosis.

Talented goalie Morgan Coxhead, 14, has been heralded as a future star between the sticks who has already visited the England senior squad for training.

The teen is now desperate to break down the boundaries by becoming the first pro with his condition to make the grade at the top level.

He was diagnosed with the genetic disorder that mostly affects his lungs when he was just a year old.

And he said that despite having to work twice as hard as any other player to now impress – his handling and shot-stopping skills have already come to the attention of leading coaches within the national set-up.

He currently stars for Truro and Charlestown football clubs as well as representing his county of Cornwall.

But he has also been invited to join the Plymouth Argyle training programme and is currently raising money to join a prestigious summer training camp at newly-crowned Premiership champions Manchester City.

He said: “I want to be the first person with cystic fibrosis to become a professional footballer – I don’t think anyone has ever done that before.

“I know I need to work hard, with CF I need to do twice as much as everyone else and train twice as hard, but I am willing to do whatever is necessary.

“There is now a professional rugby player with CF, Nathan Charles, who plays for Bath, and seeing what he has done has given me a lot of encouragement.

“Because of what he has done I know it it is possible.”

Morgan said there were certain challenges he had to overcome but told his mother that as his condition carried a life expectancy of 40 – a career into his mid 30s as a footballer was achievable.

He added: “I’ll go training, come back and do more nebulisers and physio. so I can take up to about 15-50 tablets a day.

“There is a lot of difficulty living with CF but I will not let it stop me fulfilling my dreams.

“It has just made me more determined.

“”When I went up to Manchester City I was so impressed and really inspired by it. The facilities there are unbelievable.

“A few weeks ago I got the chance to go to an England training session and I met Joe Hart and Gareth Southgate who gave me great tips on how to become better.”

Morgan describes himself as a confident team player with good agility and a strong shot stopper.

He has currently lost just one match all season and a string of top performances have caught the eye.

To attend the summer camp at Manchester City he has had to raise £1200 by baking dog biscuits in the shape of a Cornish pasties.

He has also raised over £150 for the Cystic Fibrosis charity, Just Breathe Cornwall.

His mum Vicky said she was incredibly proud of what he had achieved so far and said he has the skill and determination to go all the way.

She said: “He will not let having cystic fibrosis stop him carrying out his ambitions. He will do what he can to get there.

“He was came back from his visit to Manchester City and heard about the summer training camp so he set up his little business making Cornish dog pasty treats.

“It is possible and doable and he knows he can achieve it if he works hard enough.

“It is just trying to find a team that is prepared to take someone with that kind of illness on.

“One minute he will be fine and the next minute he could be in hospital. It is a risk some clubs don’t want to take but he wants to push through those barriers.

“He is more than able. He is a fantastic goalie but just needs to make himself known and let people know he is a risk worth taking.

“Spending time with Manchester City was massive for him. It gave him the drive to train and play like a pro and see what it is really like.

Matt George, a goalkeeping coach within the England set-up has also offered to come down to Cornwall and give Morgan some training.

Vicky said that he has always been football obsessed.

She added: “As soon as he could walk he was amazing. He always had a football and just got stronger. Most boys like playing but he took it to the extreme.

“He was diagnosed when he was a year old and was really poorly.

“Nobody knows what the future holds for him healthwise but the average life expectancy for someone with CF is 40 and he just said ‘most footballers are done and dusted by 35 so what difference does it make?’

“People get scared of his condition and don’t want to push him too much. But to cope best with his condition he needs to be super fit and stay healthier. That makes his outlook much better.

“That doesn’t mean he has it easy. He needs to fight that barrier.

“We don’t know which way his health will go. He could suffer a bug that destroys his lungs or he could be run over by a bus. We can not change that and can not afford to focus on that. If those things don’t happen there is no barrier to what he can achieve.

“He is keeping himself well and healthy and that can only be a positive.

“He has smashed his target for the first summer camp, but he is going to continue as it is not a one off thing. It is part of his ongoing personal training.”