"If you boo an anti-racist statement, in my view that makes you racist," Danny Mills said. 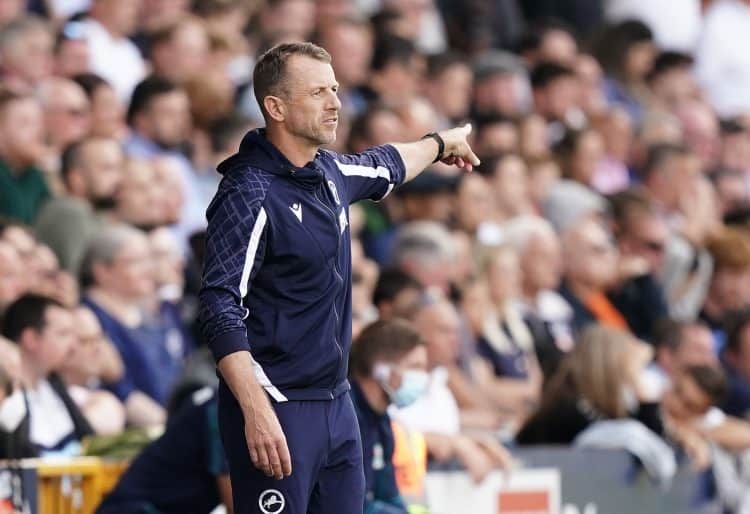 Millwall boss Gary Rowett has been slammed for his comments after Millwall’s defeat against Fulham last night.

In the post-match interview, he failed to condemn fans for booing the taking of a knee.

The visiting players took the knee prior to kick-off as they did in the Premier League last season but were booed by home fans at The Den.

Rowett called on authorities to “find a way to unify people” that did involve players taking the knee.

Speaking to Sky Sports after the match, Rowett said: “We need to find a better way to unify people.

“I don’t want to comment on individuals’ decisions to do that but we need to find a way to unify people and at the moment 20 seconds, 30 seconds in a game is causing such a rift and divide amongst football.

In my opinion football is a great spectacle and we’re all privileged to be part of it but it has the power to help communities. We need help to find a more positive way of making some form of action.”

In response to the events at Millwall’s ground Danny Mills told Sky Sports News: “Players have said this is nothing to do with politics, this is ?????? about anti-racism”

“If you boo an anti-racist statement, in my view that makes you racist,” he said.

? "Players have said this is nothing to do with politics, this is ?????? about anti-racism"

"If you boo an anti-racist statement, in my view that makes you racist"

Danny Mills on fans booing players taking the knee after it happened at The Den before Millwall vs Fulham. pic.twitter.com/vfTJMxTq1O

.@jobimcanuff7 . No fear, speak your mind, voice the opinion of yours and many others. Still a hero ? https://t.co/44WTiomewD

Aleksandar Mitrovic opened the scoring early on for Marco Silva’s men before man of the match Fabio Carvalho doubled their lead with only eight minutes gone.

Benik Afobe scored his first goal for Millwall since arriving from Stoke on loan in the 87th minute to set up a nervy finish but Fulham held on to remain top of the Championship and leave Rowett’s Lions still looking for their first league win of the season.

“I thought we were beaten by a far better side, they gave us a bit of a lesson,” said Rowett.

“They out ran us, out passed us and showed a little bit more drive and desire than us and the goals are typical points in case.

“I think they showed tonight they are one of the best sides in the division and they play with such pace, power and intensity and the simple fact was we couldn’t get close enough. We looked like it was physically too much for us.

“It’s disappointing we allow Mitrovic a chance to prod the first one home and we didn’t work hard enough to close the run for the second but sometimes you have to accept the opposition were better.

“The last 20 minutes we showed a little more belief and maybe if we score earlier we have a little bit more time for that pressure to help get the goal we probably didn’t deserve – but at least we were trying.”

Carvalho, 18, teed up Mitrovic after racing down the left before scoring himself at the near post, with both players netting in consecutive games.

Afobe tucked home replacement Matt Smith’s cushioned header to set up a grandstand finish but in truth Fulham were dominant throughout.

“I was really pleased to see how we played and we deserved the three points. We were the best team on the pitch,” said Silva.

“From the first minute until the last we were the dominant team, and we didn’t even let them arrive in our box for most of the game.

“We managed the game well with the ball and created so many chances to have a different score.

“We knew it would be difficult to play against Millwall with this crowd and in this atmosphere. But I asked them to show our quality and it was a good test of our character and personality.

“It did get nervy towards the end, but that’s football. That we created so many chances is a good feeling for me; last game we scored five but you cannot always score four and five.”