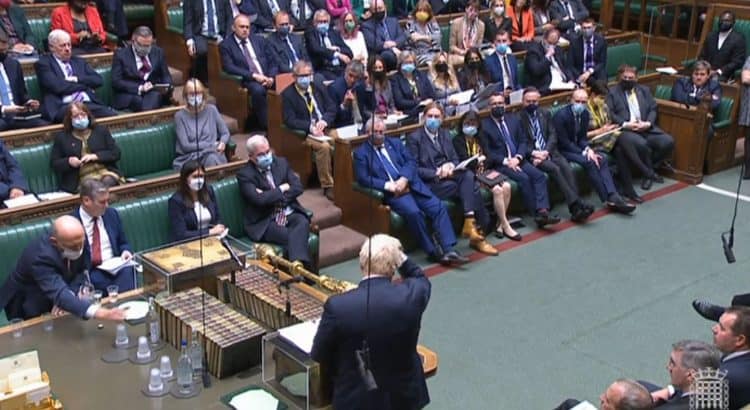 Politicians wearing face coverings in Parliament when they are not speaking sets a good example, a public health expert has warned.

The House of Commons was at its busiest since March 2020 as MPs were recalled to debate the situation in Afghanistan, with members sitting shoulder-to-shoulder.

Some were wearing face coverings as they sat for the hours-long session, but many, including Boris Johnson, were not.

Labour MP Dame Angela Eagle tweeted: “Not a single member of the Govt front bench wearing a mask from PM & Health Secretary on down #HoC Almost no other Tory either.”

Since 19 July face coverings have not been mandatory in England, but government guidance says they are recommended in crowded and enclosed spaces.

It says: “We expect and recommend that members of the public continue to wear face coverings in crowded and enclosed spaces where you come into contact with people you don’t normally meet.”

It adds that people should “use your judgment in deciding where you should wear one”.

Asked why a number of MPs were not wearing masks in the House of Commons, the prime minister’s official spokesman said it was a matter for the parliamentary authorities.

The spokesman said the advice “still remains” that face coverings should be worn in indoor crowded spaces.

But he added: “The arrangements for the House are a matter for the parliamentary authorities, as you know masks are not a mandatory requirement.”

Edinburgh University professor of public health Linda Bauld acknowledged that while it might be difficult to make a speech in Parliament with a mask on, it would be “good practice” for them to be worn when not speaking.

She said: “The virus is airborne, we currently have slightly rising numbers of cases, so it is a protective measure that they can take and I’m sure everyone in public health would agree when indoors we should do that where possible.

“It is important that people who are in positions of authority lead by example, and that’s been a bit of an issue throughout the pandemic in a whole variety of respects but continues to be the case.

“If public figures are wearing them indoors, that will encourage others to do that in working environments even if it’s advisory.

“When you’re in a crowded indoor environment and distancing, as in two metres, is not possible, then a face covering does provide additional protection.

“And I think if members of the public are seeing a crowded indoor environment, where those mitigations are not being used when they’re available, that’s not best practice and it may send a message in relation to other environments that people are accessing.”