His comments come as Chelsea's billionaire owner Roman Abramovich "has been effectively barred from living in Britain." 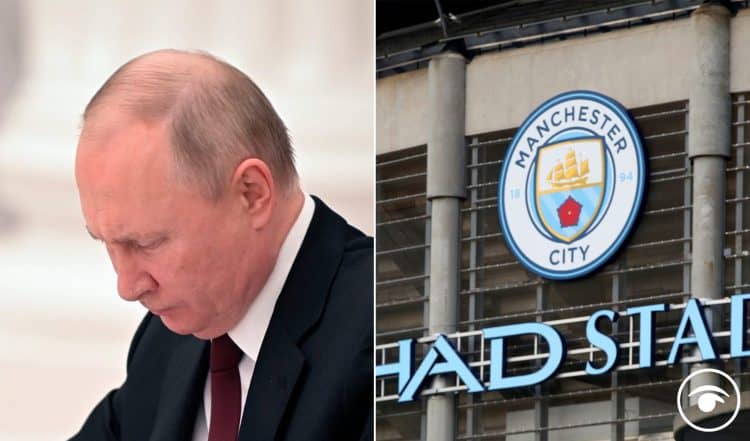 The defender, 25, said earlier in the week that he “can’t stand back” whilst “the whole civilized world is concerned about my country.”

This morning he has again taken to social media to tell the world how angry he is at the Russian invasion.

Zinchenko, on his Instagram story, posted a photo of Putin with the caption: “I hope you die the most painful suffering death, creature.”

It comes as Chelsea’s billionaire owner Roman Abramovich was effectively barred from living in Britain due to sanctions.

According to The Sun, senior security sources now say it is unlikely that the 55-year-old will ever be allowed to live in the country again.

Immigration officials are reportedly under instructions to make it impossible for Mr Abramovich – who owns a £125 million mansion near Kensington Palace – to base himself in the UK.

It comes after Mr Abramovich was named by MPs on Tuesday as being one of 35 oligarchs identified by Russian opposition leader Alexei Navalny as one of the ‘key enablers’ of the ‘kleptocracy’ run by the country’s president Vladimir Putin.

Not scared of ‘bully’ Putin

He also described the Russian president’s warning to the international community as an attempt to “scare” them away from responding, amid reports of explosions in key Ukrainian cities.

He said Mr Putin has no justification for his actions, and the rest of the world will not be cowed by Russian aggression.

Mr Cleverly told BBC Breakfast: “It’s clear that he is trying to bully the international community, as he has attempted to bully Ukraine for years, and we will have none of it.

“If Vladimir Putin thinks that he can scare the international community away from supporting Ukrainians in defence of their homeland, he is absolutely wrong on that and should be under absolutely no illusion that we will continue to support the Ukrainian government and Ukrainian people.”

“Consequences they have never seen”

Mr Putin issued a stark warning to other countries that any attempt to interfere with the Russian action would lead to “consequences they have never seen”.

He said the invasion was a response to threats from Ukraine.

But Mr Cleverly told Sky News: “The excuses that he (Mr Putin) has been giving, the justification that he’s giving, cannot be believed.”

He added: “The military leaders around Vladimir Putin must know that this is a catastrophically bad judgment call.

“I have no doubt the Ukrainian people will be ferocious in defence of their homeland.

“The military leaders must know that this will come at a huge cost – not just to Ukrainians.”